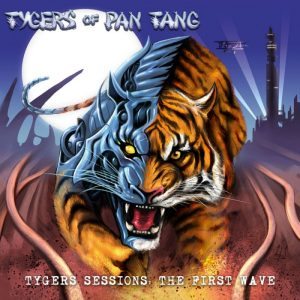 The bumps and scratches of a well-played record give way the opening song on the album: The Tygers Sessions: The First Wave, but wait something is different? No Jess Cox vocals coming out of my speaker? Strange, the song is familiar, what’s happened? The answer is that that NWOBHM outfit Tygers Of Pan Tang have re-recorded 11 versions of some of their classic songs and it’ll be available February 28 2015 via Skol Records.

Guitarist Robb Weir says: “I am very proud of the band’s history as well as the current line-up. We should never forget the Tygers history and hope this shows we will always recognise the early days of the band.”

“There are a lot of bands that want to modernise their sound or image and forget what made them great in the beginning. I am not one of them. We are very pleased with the end result, in particular with the recorded sound achieved, it really does capture the early 80s NWOBHM spirit and feel we were looking for.

“To achieve that raw, almost ‘live’ vibe to the sound, we even replicated the microphone positioning that was used on the original recording.”

I’ve always liked Tygers for a few reasons; they took their name from the evil sorcerers portrayed in Hawkwind collaborator Micheal Moorcock’s Elric novels, they’re from my home town, the songs are almost as immediate as pop singles, but are obviously much heavier with the added awesomeness of some incredible guitar solos too and finally the band gave John Sykes (later of Thin Lizzy and Whitesnake) his big break. Tygers have always managed to find that happy medium between punchy hard rock, metal and the energy of punk. Back in the day they struck me as one band which would almost certainly make it big in America, as in my opinion their songs, look and attitude were (and still are) much better than counterparts such as Def Leppard. But like so many groups of that era it just never happened for them for one reason or another.

The selection of songs presented on The Tygers Sessions: The First Wave are all from album releases the band made in the early 1980s. The Wild Cat album was surprisingly raw, but it still got 3.5 stars out of 5 from Sounds and reached 18 in the UK album charts – a very decent result. Changes were afoot for their next release, Spellbound, with the band recruiting Jon Deverill from Persian Risk as the new singer and hiring John Sykes as a second guitarist. Both of these albums are really essential NWOBHM LPs full of catchy tunes, which if you claim to like metal then you must own.

The problem that Tygers faced was that while their songs were strong they were subjected to the dreaded NWOBHM production values which weren’t always that great. In fact most albums from that era sound like they were recorded inside of a biscuit tin using an Edison cylinder. The original album recordings had the bass turned down low in the mix and the guitars sounded reasonable but as crisp or fresh as they should have been. Not so on this re-recording, I’m please to say as the slick re-arrangements and spit ‘n’ polish Tygers have applied, have, in my opinion, made songs, which were good now genuinely great.

When all is said and done Tygers weren’t at Maiden’s level, but they were approaching it. With this re-recording anyone who wants to hear what truly great NWOBHM sounds like should pick up a copy and rock like its 1980 all over again.