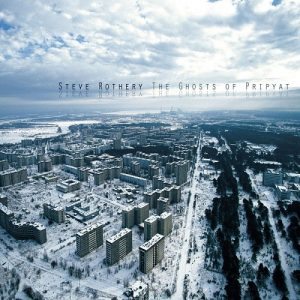 Released on February 2, 2015 via InsideOut Music

Steve Rothery is best known as guitarist for those whipping boys of the mainstream press, the progressive rock band Marillion. For over 30 years, Marillion have surprised and delighted fans old and new with some truly outstanding music. Musical fashions have come and gone, governments have formed and fractured… and Marillion are still here, not just unbowed but positively revelling in their role as eternal underdogs, having now delivered more than 15 studio albums of tremendously well-wrought and highly emotive music. The cornerstone of Marillion’s music, perhaps, is Steve Rothery’s elegaic guitar. Influenced by players such as Pink Floyd’s David Gilmour and Camel’s Andrew Latimer but with a style all his own, Rothery – as the longest-serving member of the band – is in many ways the core of the band and one of its chief writers.

Yet in all those 30-plus years, Rothery has never released a solo record. He has enjoyed a largely-acoustic based side project in the shape of The Wishing Tree, who have now released two albums (1996’s Carnival Of Souls and 2009’s Ostara), but has never released an album under his own name. Until now. A strikingly successful Kickstarter campaign – for a brief time, the Ghosts Of Pripyat pre-order was the most successful Kickstarter project in the world – has allowed Rothery the time and supporting talent to produce something very different to his day job; yet familiar enough to fans of Marillion to forge a strong link to Rothery’s work in that band.

Whilst The Ghosts Of Pripyat is a solo album in name, Rothery has assembled a strong band to record it. A reflection of the strength of the band is that two previous live albums that Rothery has released in the run up to the release of this, his first studio album, were billed as being by ‘The Steve Rothery Band’. The band form a next-generation progressive rock supergroup of sorts: Dave Foster (Mr. So & So, Panic Room) on guitars, Leon Parr (ex-Mr. So & So) on drums, Yatim Halimi (Panic Room) on bass and Riccardo Romano (Ranestrane) on keys & acoustic guitar. Throughout the album they add further colour and crunch to Rothery’s instrumental flights of fancy, giving it an appealing earthbound energy.

The album opens in almost cinematic style with ‘Morpheus’. Marillion fans will delight in the way this track builds with an almost sensual slowness from barely audible ambient wash to a circling riff comprised of Rothery’s signature guitar sound, a crystalline chorused sustain that is powerfully evocative in its simplicity. ‘Morpheus’ is half over before the band puts its full weight behind Rothery’s playing, but this is one of this album’s strengths. It is not a ornate shred-fest, nor is it a somnolent none-more-authentic bore; the music – like Rothery’s playing – is effortlessly melodic and atmospheric, almost a film soundtrack without a film. It is here that Rothery’s fondness for the playing of Genesis guitarist Steve Hackett is most evident, and it’s entirely fitting that Hackett himself makes a guest appearance on this track. The two veteran guitarists trade off against each other beautifully, as if they’ve been playing together for years.

Like any good soundtrack, each part of the album is very different in tone. Where ‘Morpheus’ was dreamy and reflective, ‘Kendris’ toys with a rolling, almost African-style drum pattern. Romano’s keys are especially important to this track, colouring in the backdrop to a musical safari whose shimmering heat haze makes for a warm, feelgood part of the album. This contrasts wonderfully with ‘The Old Man Of The Sea’, which is in many ways the centrepiece of the album. A near 12-minute track, it covers a range of moods very effectively. Opening with wave sounds, whale song and a mournful, lonely guitar fed through a Leslie effects pedal, it sounds beautifully Floydian – an effect only magnified when Rothery’s more familiar signature sound emerges to pick up the story. From these tentative but wonderfully evocative beginnings, the track gradually builds in intensity, musically and emotionally until it becomes as powerfully elemental as the sea that is its muse. The closing section in particular is one of the feistiest things that Rothery has committed to tape recently, featuring some forthright riffing built on top of a powerful performance by the assembled musicians, notably the muscular rhythm section of Halimi and Parr. In mood and subject matter, ‘The Old Man Of The Sea’ sits comfortably alongside Marillion’s epic ‘Ocean Cloud’. Steve Hackett makes another guest appearance at the end, as does progressive rock wunderkind Steven Wilson – with Rothery’s presence, there are essentially three generations of progressive rock’s finest all delivering some great playing; a rare treat.

‘White Pass’ was inspired by a treacherous icy path used by prospectors during the American gold rush, and its steadily rising tension is perfectly matched to its subject matter. A chugging, almost metallic riff crunches in midway through the track, the ideal accompaniment to this immersive tale of survival in a hostile environment. You can almost taste the icy chill of the howling winter winds. ‘Yesterday’s Hero’ also builds slowly, although the mood is almost antithetical to ‘White Pass’: the track – a remembrance of Rothery’s late stepfather, a World War II veteran – forms a delicate and deeply emotive elegy that displays some of the most restrained playing on the album. Here, more than anywhere else, Rothery evokes the feel of mid-period Dire Straits, the gentle washes of keys and E-bowed guitar building to an affectionate but achingly sad solo that Mark Knopfler would have been extremely pleased with. This is the essence of Rothery’s playing, bottled in concentrated form: less is most definitely more. The closing two minutes display another marked influence, as the band dial up the blissful introspection into a dynamic gallop, accompanied by some very Latimer-esque playing, as Rothery tips his hat to another formative influence. Perhaps understandably the most intensely moving track, this is very special indeed.

The penultimate track, ‘Summer’s End’, is another slow-burner, building from a sleepy, bucolic opening into an organ-driven hard rock riff that powers along, with a number of solos built over it, as Rothery trades some intense workouts with Foster, both of them clearly egging the other on to greater and greater heights. The magnificent atmospherics of ‘The Old Man Of The Sea’ and the emotional intensity of ‘Yesterday’s Hero’ are hard to top, but if the restraint shown on the rest of the album leave you longing for heads-down rock and roll, here it is.

The closing title track was inspired by photographs of the now deserted town of Pripyat in Chernobyl. After the nuclear accident there in 1986, the town was abandoned after radioactivity rendered the region uninhabitable. Reclaimed by nature, Pripyat makes for an eerie monument to those who died, and the displaced workers whose lives have never been the same. That same uncanny sense of loss and aftermath informs the track, which almost serves as an epilogue to the album. Rothery and Foster, joined by Romano on 12-string acoustic, build a slowly expanding web of limpid acoustic lines, almost like a musical round that becomes more ornate as it develops. The rest of the band arrive a few minutes later, developing the pattern of the round into a cyclical, almost Zeppelinesque riff. In five minutes the track goes from reverent near-silence into a muscular rocker, and you barely notice it happening; it feels effortless, utterly uncontrived.

It’s striking, on an entirely instrumental album written and produced by a guitarist, how few solos there are on this album given its running time. Rothery’s economy is admirable in that it is never forced; this is just how he takes care of business. That in itself is one of the reasons he is so beloved as a guitarist: yes, he can be truly devastating when delivering a solo; yes, he can crank out a chunky riff with the best of them; but his playing is always in the service of the piece. His reliably deft hands deliver not riffs or solos so much as they paint with six strings. Here, freed from the constraints of delivering songs – as in Marillion and The Wishing Tree – those sound paintings are given centre stage 100% of the time, and it’s testament to Rothery’s abilities as a player and a writer that the results never fail to hold your attention.

Those familiar with Rothery’s work in and out of Marillion have waited a long time for his first solo album, but it has most definitely been worth the wait. Richly atmospheric, dynamic, emotive and beautifully recorded and mixed, The Ghosts Of Pripyat is everything that those who waited for it with baited breath were hoping for. For everyone else, the album is a stunning showcase for one of the UK’s least-acknowledged guitar maestros; the perfect introduction to a talent whose indefatigable muse continues to serve up some truly extraordinary music.