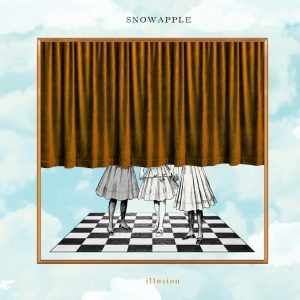 Released on February 2, 2015 via Debt Records

Illusion serves as the second full length release of Snowapple. A delicate but creatively tough listen, Illusion offers plenty to delve into.

There are many artists that struggle to write an enticing biography for themselves, which, of course, cannot serve as a reflection on the quality of the music that is created. Nevertheless, the immensely talented trio that make up Snowapple possess the double whammy: a fascinating back story and the inspired music to back it up.  The Dutch trio who form Snowapple (Laura, Una, and Laurien) can collectively boast of relations with South African jazz musicians, an international career as an Opera singer, and a fruitful background in Latvian folk music. With their confident and theatrical delivery, the remarkable background of Snowapple is omnipresent throughout their music.

The vocal harmonies within Illusion are a thing to be admired. The professional vocal backgrounds present within Snowapple are glaringly obvious throughout the album; significantly so on ‘Evil Wizard’ and the brilliantly climactic ‘Pale Blue You’.

“Folk- pop” may very well be a good descriptor for Snowapple; it undeniably slots in with the gentle string arrangements and delicate vocals that the majority of Illusion is centred around. Tracks such as ‘Small Stone’ and ‘California’ are pieces that will tickle the senses of the most fastidious folk music aficionado.

Although there is no denying the band’s ability to write an emotive piece, A large part of the appeal for Snowapple comes from the seemingly effortless ability to simultaneously be both accessible and experimental: A talent that can be seen in the creative wizardry of acts such as Wild Beasts and The Dirty Projectors. The experimental nature of Illusion is what really takes the album into a different territory, there is never any shortage of creativity and tracks are pushed into new realms with genre bashing innovation. However, that is not to say that Snowapple exclusively combats the unwritten laws of folk: ‘TOC’, for example, is a wonderfully astute piece that revels in its simplicity: wonderfully woody acoustic guitar and choir like vocals make for a plaintive yet uplifting listen.

One listen is all it takes for Illusion to cling on to your sound receptors (I’m no biologist), however after the second or third spin you may begin to pay more attention the dramatic mystery of ‘Illusion’, or the sparkly electronica and operatic vocals of ‘Wolves’. Like all great albums, Illusion is crafted with the intention that it will be explored and absorbed. Snowapple frequently throw in elements of mischievous Avant Garde, jazz, and even doses of “nursery rhyme –eqsue” whimsy in tracks such as ‘Marry a Man’ and ‘Plato’s prank’; all of which make for a compellingly restless full listen.

There are swathes of artists practising the respected art of writing cautious, but lovely, folk-pop but I am yet to hear anything like Illusion; Snowapple are delightfully unique and clearly possess no inclination to hide this.

Snowapple are currently embarking a tour of Europe, USA, and the UK. See dates here: https://www.snowapple.nl/agenda.php.