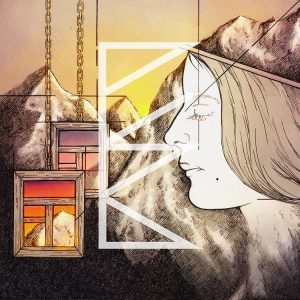 Released on January 1, 2015 via Self-released

The latest album from musician and composer Ivan Lavrov, working under the moniker of Ovod, offers up an incredibly ethereal and mysterious album experience, taking great influence from the ambient genre, but not tied down to its constraints and restrictions. On Between The Days, we hear Lavrov developing ideas and themes taken from a variety of sources, using different thematic elements to bring life to the music. We can see here great talent bursting forth into incredibly cinematic music, where images and locations burst forth into the mind with incredible ease and comfort. Between The Days comes across as rather dark for the most part, though there’s hints of comfort underneath darkened layers.

Between The Days opens up with quintessential ambient textures, using drones and field-recordings to establish the groundwork in which Lavrov builds the track up. Each track seems to offer up its own ideas and images, though there’s a coherency running throughout most of the album, connecting each track through the musical techniques used to create the tracks themselves. There’s wonderful musical texture being presented by Lavrov, which results in a very dark yet enjoyable album experience. Most of the tracks on Between The Days build up wonderfully, showcasing some great talents from Lavrov in terms of musical composition.

Whilst many tracks on the album contribute wonderfully to the overall concept Lavrov is trying to present, it seems that a few tracks fault on a few somewhat experimental ideas. Most tracks seem to be dominated by the same style of ambient drone, accompanied by other effects and techniques. Whilst these build up nicely into an interesting album experience, it does suggest that there’s not as much variety in terms of music on Between The Days as there could be. Other tracks even seem to introduce some nice musical motifs, only then to take them away before they’ve had enough time to establish themselves.

There’s a fair amount to enjoy on Between The Days, though it seems that Lavrov could perhaps benefit from refining his ideas a lot more. There are some wonderful musical ideas and techniques being presented on the album, many of which result in some very interesting tracks that are certainly enjoyable. The album could easily benefit from a little bit more care and attention at every turn and corner, which would elevate it into one that is a fantastic piece of work. At the moment, there’s enough here to show us a good enough extent of Lavrov’s talents, and his own ideas in terms of musical composition.