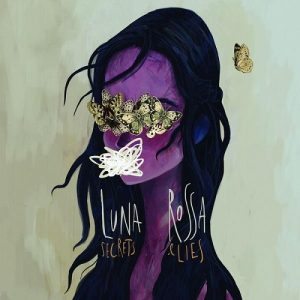 Luna Rossa is a side project by Panic Room‘s Jonathan Edwards and Anne-Marie Helder, but is a rather different proposition. There are some undeniable similarities between Luna Rossa’s material and that of the Panic Room mothership, though as Edwards and Helder are the chief writers for both projects, this is not unexpected. The difference is one of emphasis: whilst Panic Room’s music is filmic and possessed of a kinetic rock with influences from other genres, Luna Rossa’s music is more acoustic, more intimate and confessional, built heavily upon Edwards’ tinkling keyboards and Helder’s deft touch with acoustic guitar and her effortlessly emotive vocals.

Secrets & Lies is the duo’s second album, following 2013’s Sleeping Pills & Lullabies. If anything, it’s even more sparse and introspective than its predecessor, almost as if the duo wanted to move Luna Rossa’s music still further from their work in Panic Room. Sleeping Pills & Lullabies saw Edwards and Helder indulging in numerous instrumental novelties, even employing tuned wine glasses. Secrets & Lies opts to increase the sonic distance between Luna Rossa and Panic Room by stripping the instrumentation back more than ever. Helder gets to pick up her flute (the “silver wand” so beloved of Panic Room fans), and the duo use a string quartet and some limited electric and baritone guitar for additional flavouring, but the bulk of the music is comprised of what could be considered the core Luna Rossa sound of acoustic guitar, piano, double bass and harp.

This is perhaps reflective of the general mood of the album, which is more confessional than ever. The themes are universal: love, loss, depression, joy, and all the attendant problems and breakthroughs that day-to-day living provides us with; consequently this album frequently can’t help but hit quite close to home. For instance, the title track details the slow disintegration of a marriage from the perspective of both a man and his wife, complete with plangent Twin Peaks guitar interlude, the pregnant pauses between each lyric providing a wonderful but unbearable tension. As a study of the ways we manage to injure each other – and perhaps ourselves – emotionally, it’s utterly compelling, but it’s not easy listening. Similarly, the moody organ-led ‘Disappointment’ spells out the protagonists’ disillusion with a relationship that is very one-sided, sleepily baleful electric guitar singing the blues as Helder pours out her discontent, whilst ‘The Black Dog’ talks very intensely about depression, and of the ability of strong relationships to drive away the clouds, if only for a while. The lush acoustic guitar, paired with Edward’s elegant piano and glorious double bass line, makes for a hypnotic yet unobtrusive accompaniment.

The self-examination doesn’t end there, either: the swirling, mesmeric organ of ‘Tiny Demons’ frames a story about the little voices we all have within us whose only purpose seems to be to make our lives more complicated, Helder’s soulful flute filling the solo spot to atmospheric effect. Helder displays solidarity and understanding with a dear, departed friend in the stirring ‘Fly Away’, whilst ‘I’ve Been Wrong Before’ sees her lamenting her own choice of partners, worrying that perhaps if something seems too good to be true, perhaps it is. ‘The Harmony’ is a powerfully moving but hopeful message to a dying friend or relative, releasing them from this life (“Put your light in the sky / It’s not ours to question why”) and hoping that they will find “harmony, serenity / that you are so deserving”. Helder’s vocals are truly outstanding here, and it is also here that the strings of the ‘Luna Rossa Quartet’ are perhaps most effective. The album ends with the eerily sparse ‘No Chords Left’, possibly a sequel to ‘I’ve Been Wrong Before’, which sees Helder left alone, and broken-hearted: “the harmony you took from me / Has left me singing solo now”. It’s a strikingly bleak and downbeat way to end what is an intense and naked record.

The album is not all gloom and introspection, however. The record opens with a sweetly acoustic near-instrumental entitled ‘Aurora’, Edward’s gentle piano and Helder’s acoustic strum meeting with plucked harp and rolling acoustic bass before ushering in a wordless, awestruck Helder vocal line. Like the aurora itself, the track is quite a spectacle in all it’s delicate beauty. In total contrast, there is the entirely appropriately titled ‘Happy Little Song’, a boisterous, deliriously joyful ray of purest sunshine that manages to be sweet but never irritatingly twee, despite containing lines like “the animals and me can hit the seaside and we’ll play”. Helder’s sympathetic, joyful vocal is perfectly married to a naggingly memorable motif that you’d have to be a robot not to smile along to. An instant mood enhancer, it’s quite sensibly placed mid-record, between two swathes of more intense material.

Similarly, ‘Flowers In My Hair’ throws the curtains open and lets the light into the music in a similar – albeit more measured – way, a shimmering piano-led backing soundtracking a hopeful lyric where Helder imagines that her fondest wishes might come true if, as she has been told, “you really want them to”. The wordless bridges are comprised of the melody line from the nursery rhyme ‘Frère Jacques’: it’s warmly nostalgic, and entirely too sweet and affecting for words, but never cloyingly so.

Edwards and Helder have managed to create a small miracle with Luna Rossa. It’s remarkable that the duo have managed to create something that is clearly very different to Panic Room, and yet very much part of the same universe; Luna Rossa is perhaps the introverted aspect of Panic Room made flesh, the yin to Panic Room’s yang. The two take very different approaches, but are entirely complementary. There’s also a sense that the two projects are more focused and accomplished than might have previously been the case as the musicians work increasingly to each other’s strengths. Panic Room’s Incarnate was arguably their finest album to date, whilst Secrets & Lies is powerful evidence that Luna Rossa has now truly found its sonic and lyrical niche in, as the band would have it, the ‘Panic Roomiverse’. Not rock, not folk, not jazz, but inhabiting a hushed, bruised but wonderful world somewhere in-between, this honest, beautiful and sometimes heartbreaking record is a triumph.