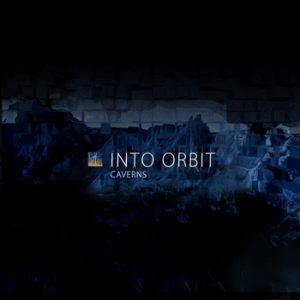 Mysteriously, Into Orbit‘s Caverns début release somehow escaped review last year. This is surprising with the love of metal, rock and post-rock among the reviewers here at E&D. I’m hoping more listeners don’t miss this impressive instrumental release as well. Into Orbit is a two piece hailing from Wellington, New Zealand. Their sound is reminiscent of many post-rock bands such as Russian Circles and Explosions In The Sky with dynamic music, that builds upon soft melodies into energetic, gutsy riffs. In addition to the satisfying post-rock edge the band also includes plenty of atmospheric ambiance and immersive drone.

As an instrumental band the musicianship (especially for a two piece!) has to be exceptional. And track after track, Into Orbit are up to the task. Paul Stewart creates all the guitar magic while Ian Moir drives the music on drums. The album gives you the goods immediately with the remarkable rocking opener ‘Corridors… Caverns’. It clocks in at close to 10 minutes and is a perfect example of what Into Orbit bring to the musical table. The track opens with a gentle melody which slowly gains pace and punch. The band shifts gears after 3m and the track becomes decidedly heavier while still maintaining a strong melodic swagger. The song drifts into some sweeping celestial, droning atmospherics then climaxing with a spirited crescendo. The tones are crisp and appealing. It is easy to get lulled by the tempting groove Into Orbit create as they soar to a dramatic finale with cymbals crashing and guitars wailing.

The lovely melodies continue on ‘Set Adrift’. Stewart plays long floaty chords that wash upon our ears like gentle waves. Moir’s accentuated beats drop in as a striking contrast to the waves. I’m not sure where Into Orbit were drifting toward but they arrive at the end of song with a jagged, unwelcome cacophony. Much like ‘Set Adrift’, the sunny track ‘Aphelion’ draws you in with a warm enticing opening that darkens the deeper you roam into the track. As with all good instrumental music, Into Orbit’s songs are never stationary long. The songs are in constant evolution with new ideas rising and turning down unexpected aural cul-de-sacs. Caverns is gripping, engaging and very entertaining composition. (The witty order of tracks is worth noting: ‘Aphelion’ and ‘Perihelion’ surrounding ‘•’ 🙂 ) The album ends with an exclamation point with the wonderful ‘Creeping Vines’. ‘Vines’ charges with layers of guitar cascading into clamorous drums. Midway through the track unhinges into a dense fog of drone and feedback as the sinister vines engulf their prey.

Caverns is bold, rapturous melody meld with enterprising, creative composition. There are soft, loud, heavy and delicate passages all of which are executed with equal sonic capability. Stewart’s guitar sorcery conjures many bewitching musical odysseys, which are led by the stalwart direction of Moir’s mesmerizing drumming. This is a fantastic album of post-rock/metal/instrumental/atmospheric/progressive/drone/ambient… delightfully experimental… music.

Oh, did I mention this audacious release is “name your price” on bandcamp? *gasp!* No excuses. Get it now.