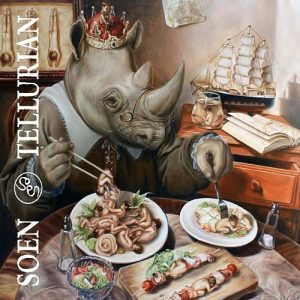 Released on November 3, 2014 via Spinefarm Records

There’s nothing like the word “supergroup” to immediately polarise an audience: the word either strikes you with terror or fills you with delight, and those feelings are usually reliant on who comprises the band in question. Back in 2011, when Soen began work on their debut album, the prospect of so many big hitters from the world of extreme metal was a tantalising one. Ex-Opeth drummer Martin Lopez, ex-Death and Testament bassist Steve DiGiorgio, Willowtree vocalist Joel Ekelöf and guitarist Kim Platbarzdis made for a formidable line-up and their debut album, Cognitive, was a fascinating, emotive and multi-faceted record that also happened to be as heavy as a bag of spanners. Recalling Tool – a band that all the members of Soen openly professed their love for – Cognitive mixed lush balladry and sweet harmony vocals with crunching riffs and thunderous drumming from Lopez. Mixing the Tool influence with the various established stylings of the various members, the record arrived to very positive reviews and it seemed that this was a “supergroup” that truly deserved to be described as such.

It’s unfortunate but often inevitable that such forward momentum leads to changes, and DiGiorgio departed, to be replaced with Stefan Stenberg, who, it must be said, fills his sizeable boots very effectively. So much so that Stenberg’s thick, sturdy bass parts are likely to be one of the things that strikes you most forcibly upon your first hearing of this, the band’s second album. Tellurian means “of or inhabiting the earth”, and Soen’s music is definitely earthbound – even the occasional celestial harmony vocals are anchored to the ground with the neutronium-heavy riffing that were such a feature of their debut. This time around, however, the band reach for the stars with a somewhat more overtly progressive approach: indeed, whilst there’s certainly still an obvious stylistic fondness for Tool, Tellurian feels more informed by Lopez’s time in Opeth: there are striking, sudden switches from crushingly heavy riffing to spacey, sparse vocal sections underpinned by acoustic guitar that recall moments from Opeth’s classic Blackwater Park. The arrangements are more ambitious, veering off in utterly unexpected directions at times – notably in ‘Ennui’, which opens with a very Opeth-style piece of riff theatre, and ‘Pluton’ where Lopez and Platbarzdis delight in building up the stuttering riff, then charging off at breathless tangents before returning to the central melody without sacrificing any momentum.

Perhaps the most striking development here, though, is Ekelöf’s increasing ease behind the mic. Where he occasionally sounded tentative on Cognitive, here he feels like he has truly settled in, and many of the most affecting moments on Tellurian are the ones where he is given the space to stretch his vocal lines: alternately plaintive and powerful, pleading and fatalistic, Ekelöf is in many ways the soul of this band and their material is the more powerful for his contributions. Arguably the album’s centerpiece, the truly beautiful ‘The Words’ not only provides an object lesson in steadily building tension, but allows Ekelöf to deliver what is almost certainly his finest recorded performance to date. Affecting and effortless, it’s an oustanding moment on an already highly impressive record. Ekelöf’s vocal on ‘Ennui’ is also incredibly impressive – it’s impossible to remain unmoved when faced with performances so powerfully emotive.

That’s not to say that the other members are just cruising along. Lopez and Stenberg make a truly formidable rhythm section, exemplified by the sudden lurches into heads-down groove metal and seismic breakdowns that regularly turn the songs on their heads and launch them off in new directions. This is truly the area where the album echoes Lopez’s past work with Opeth, the neck-snapping instrumental about-turns making the album a more exhilarating experience than it might have been in lesser hands. The frantic breakdowns in the otherwise limpid ‘Kuraman’ will drop jaws in delight, whilst ‘Koniskas’ bends itself into tight instrumental knots between vocal sections, a frantic performance from Lopez contrasting sharply with the smooth, long notes of Ekelöf’s vocal.

Tellurian places Soen firmly within a group of new progressive metal bands whose fondness for dynamics and storytelling have made them the logical inheritors of veteran bands like Opeth and Tool: among them bands like Haken and the much beloved Leprous. Soen sit somewhere slightly closer to the mainstream in some ways: their music feels more introspective and personal than many of their peers, yet despite their undoubted instrumental skill, there’s very little obvious showboating. A marked lack of solos and clear focus on the central melodies mean that these songs – for all their technical flourishes – are (whisper it) almost radio friendly, with only the two longer closing tracks – the longest tracks that the band have delivered to date – stretching out over the eight minute mark. Even then, not a moment is wasted; Soen’s economy is deeply impressive.

Tellurian is unquestionably a more ambitious record, and a further demonstration of Soen’s striking skill both as writers and performers. The only problem they may face is that of being too understated for their own good; dramatic and powerful though the album is, compared with some of their contemporaries it feels almost low-key. There’s no questioning the emotional integrity of what’s on offer here, though, and this perhaps is Soen’s trump card: at its heart, metal – progressive or otherwise – has always been preoccupied with authenticity, and that is a quality that Soen emphatically do not lack. A heartfelt and expertly delivered record, Tellurian is strong evidence that Soen are a force to be reckoned with, and that their best may be yet to come.