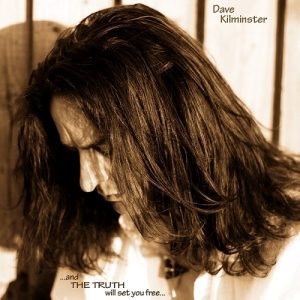 Guitarist Dave Kilminster is probably best known these days for his frankly sensational impression of Pink Floyd’s David Gilmour, having now played with ex-Floyd Roger Waters for several years. Kilminster is not merely a sensational guitarist, however – he’s a writer and vocalist as well, although these facets of his work have so far taken a back seat to his work with the likes of Keith Emerson, John Wetton, Carl Palmer and numerous others. Currently his name appears more often on other people’s records than on his own – …And The Truth Will Set You Free… is only his third solo album – but clearly there is more to him than a gun-for-hire.

The album opens with the surprisingly restrained ‘Messiah’. A gentle acoustic opening develops into a pleasingly soulful windswept rocker, with lovely harmonies and a strong chorus. Kilminster’s potential achilles heel, a seemingly inability to self-edit, becomes evident even this early on, however: at nearly 8 minutes in length it does veer dangerously close to outstaying its welcome, as a positive avalanche of choruses at the end lessen the impact of the song. Kilminster’s vocals are a bit of an acquired taste; much like Joe Bonamassa’s, they get the job done but aren’t particularly strong. The chiming acoustic ending is a welcome change from the anticipated electric guitar freak-out that some might have been half-expecting.

Perhaps more akin to what new listeners might be expecting is the second track, ‘Addict’. Possessing a strong bluesy feel, with nifty use of slide, it recalls mid-period Zeppelin at times. The track trundles along amiably enough – almost turning into Fleetwood Mac’s ‘Tusk’ at one stage – but never really catches fire. Once again, there is a sting in the tail, though – and again, it’s not a stereotypical lightning solo, but some entertainingly squelchy blues guitar, not so much a solo as a collage of wandering notes. It’s oddly reminiscent of late 70s Gilmour, which goes a long way to explain why he was the perfect man for Roger Waters’ touring band.

‘Thieves’ displays a great deal more intent, built around a sturdy rock riff. The stamping rhythm drives the song forward in a more focused way, but the chunky riffing does reveal the comparative weakness of Kilminster’s vocals again: they have conviction and emotion, but lack for power. Kilminster cannily opts to preface his most outré solo on the album with a brief violin interlude, defying expectations once again. It plays out with a string section, a sharp contrast with what went before.

The album reaches its nadir with ‘Circles’, an unremarkable mid-paced canter of a post-break-up song, topped off with some rather clichéd lyrics. The consolation is a lovely outro solo, bluesy but very much of the less-is-more school, demonstrating a Gilmour-esque economy and a finely-tuned ear for atmosphere. By the time the song comes to an end, you can almost forgive the lyrical content. Almost. Again, the seemingly endless choruses at the end of the song dilute its impact, but things are saved by the weightless resignation of the coda – one of those rare times when a fade-out really works well.

Happily, from hereon in the record is a great deal more focused and effective. ‘Save Me’ showcases Kilminster in acoustic mode. More than anything, this is reminiscent of the work of Florida’s favourite son, John Wesley; the guitar little more than a frame for a wonderfully effective storytelling lyric. It is in this environment that Kilminster’s vocals are really given the space to be at their most effective: not having to compete with crunching guitars and fuller arrangements, the fragility of Kilminster’s voice becomes a virtue instead of a liability. A very pretty string arrangement is the icing on the cake. ‘Save Me’ is a genuine delight.

‘Cassiopeia’ is another vaguely Gilmour-esque outing, delivered almost like a waltz, the simplicity of the arrangement and the (literally) starstruck awe of the otherwise traditional love song lyric combine to delightfully swoonsome effect. The closing solo in particular is truly spectacular: incredibly lyrical with a wonderful tone. Guitar aficionados will wish that it went on forever. Kilminster keeps his listeners waiting for his guitar pyrotechnics, but when they arrive, they are truly worth the wait.

In a bravura display of light and shade, the next track, ‘The Fallen’, is a more dramatic, darker track. It ups the energy level considerably from the previous few songs. A twisting, turning beast, this also features some dazzling soloing, really showing that Kilminster can shred with the best of them when the mood takes him. This and ‘Cassiopeia’ are an astonishing juxtaposition: the two extremes of Kilminster’s playing, both masterfully executed in almost perfect showcases for two very different styles. That said, this track has a blissful, almost post-coital coda with some more lovely soloing in Kilminster’s more relaxed mode.

‘Stardust’ is an almost perfect closer. It’s slo-mo late-night ambience provides the perfect setting for Kilminster’s weary vocal and languid guitar, which slowly spirals out into another truly exceptional but extremely relaxed showcase for his playing. Haunting and involving, this may well be the track that really stays with you once the album has finished playing.

Those who’ve been captivated by Kilminster’s playing have wait for this record for some time. It’s not perfect: the first few tracks are disappointingly weak compared with the material that follows later in the disc, his vocals aren’t perhaps as strong as they need to be and occasionally his lyrical muse appears to have abandoned him, but the closing few tracks alone are more than evidence enough that Kilminster is a real talent and has some real songwriting chops to go with his more obvious guitar skills. Beautifully produced – the recording is pleasingly clear, yet raw; often it feels very much like a live band recording – this is a flawed but nonetheless convincing argument for Kilminster making a name for himself with his own material, not just as the axeman-of-choice for more established acts. As the song goes, the fella plays a mean guitar, and no mistake, but as he shows here, that really is just the tip of the iceberg.