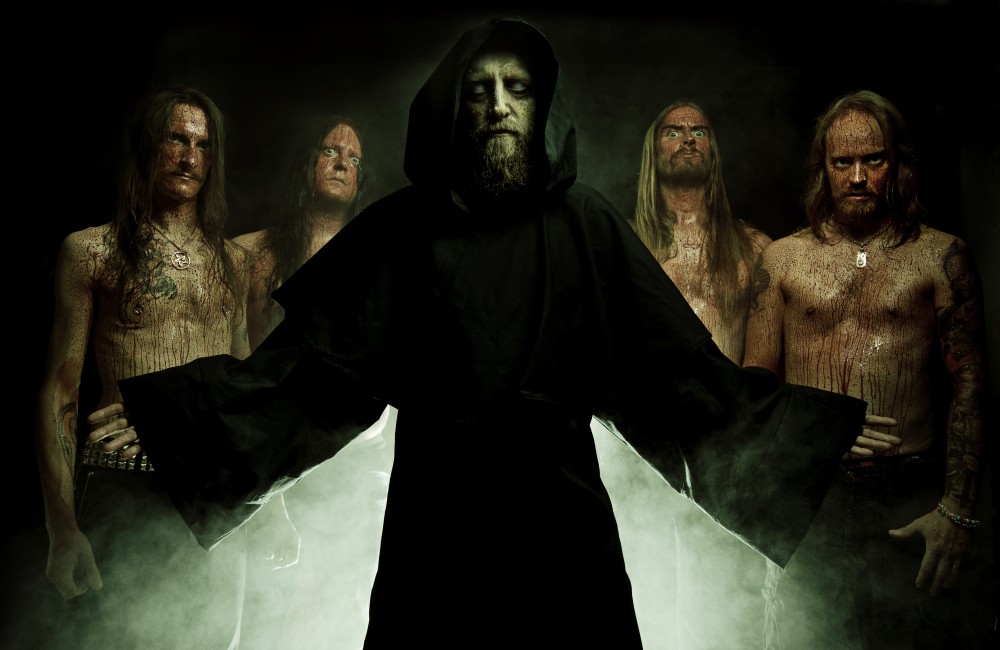 (((o))): Bloodbath has come a long way from the original experimentation in the 1990s which resulted in the Breeding Death EP. Along the way, members have changed and the sound have evolved; what were the early times like and what made you realise that this was something particularly marketable?

Anders: Well, recording Breeding Death, our first EP will always be special because how it came along so spontaneously. Out of a drunken jam came a quick delivered demo, intended just for our own experience and listening pleasure. There was no label or management involved, no expectations from the media or the fans, hell we didn’t even have a fanbase, nobody even knew there was a ”Bloodbath” being formed. We didn’t let anyone know. This was kinda before the internet age, so news and rumours spread much slower, but it did eventually reach the offices at Century Media and then the ball started rolling…Looking back on it all, I feel it’s really hard to top that kind of modest and relaxed thing we had around Breeding Death, but with that said, I still enjoyed every album we did and every chapter we’ve turned around. Bloodbath has always been fun, because we made sure it was!

(((o))): Are there any particularly fond memories of the band from earlier in the evolution?

Anders: That would probably be sitting at Swanö’s kitchen while coming up with the demo’s ”thanks and greetings” list that we totally made up just for fun. It was intended to be printed in the cassette inserts just like in the old days and it was filled with so many incredible clichés and inside-jokes we were almost choking from all the laughs.

(((o))): So far there have only been a handful of live dates, taking in some of the most prestigious metal festivals. Obviously you are severely restricted by your other bands, but do you have plans to make many more appearances and to showcase Nick live to the world?

(((o))): How difficult is it to make time and to co-ordinate everyone for the live environment?

Anders: It’s pretty much a hassle, headache and nightmare at once, but if there’s a will, there’s a way, or at least a crash and an accident hah!

(((o))): Are there any festivals or locations that you particularly want to play at?

Anders: It was important to get as many festivals as possible to take place in different countries. The colours and patterns of metal can be seen in many flags and nationalities, so we’re looking forward seeing them waiving at our live chainsaw metal massacre!

(((o))): Each of the vocalists have brought a different sound and dynamic to the band’s sound, how difficult is it for each new person to make the sound their own, whilst still being able to nail the earlier material?

Anders: Well, we went for Old Nick because he’s gonna sound like Old Nick and that leaves you pretty much with a “take it or leave it” scenario. It was never our intention to alter him or push him into a clone of neither Mike nor Peter, it wasn’t even relevant to try any of that because the music and attitude on this album demanded something different. Since Old Nick had the rotten and raw vibe come naturally, that’s firstly why he’s on the record and that’s secondly why it will also be no different to the live situation while performing old songs. Old Nick’s gonna do it his way, just as Mike did his version of the songs with Peter on.

Anders: Well, I think 2014 shows we came to a crossroad where no one felt motivated nor intrigued to continue further down the path where the last album was heading. We discussed all the styles and attributes we’d previously touched upon and realized there was one last angle we hadn’t fully explored – the filthy rotten old school approach! With that in mind, we decided to take a steep turn and go all the way to the beginning and actually even a bit further back than our original starting point. This decision brought back a long lost magic and newfound excitement into the making of the album. Considerably, both a new challenge and a familiar comfort at the same time, so on this album, we decided that nothing on the guitar front was gonna be held back or compromised. We’ve actually used and featured the HM-2 pedal on every single album except the first EP up until now, but each sound’s been tweaked so differently. In the past, the guitar sound has mainly been trimmed and toned to the point where the savage and extreme delivery have been sacrificed for a more all-round and safe sound, to achieve something more “pro”, except for the guitar sound on our debut album which was really one big HM-2 massacre and this new album is heading right back there, but doing it even heavier and more organic. This time we topped our chainsaws with an extra layer of barbed wire drenched in blood and eager to draw some more ha-ha! Drums are all natural and just bangs and rings like they were supposed to. Technically it’s all more human and less software oriented.

Everything is really pushed towards the extreme and organic at the same time. Entombed’s Left Hand Path was obviously the Holy Grail both as a reference and for a musical guideline. Another crucial album was Autopsy’s Mental Funeral. That album really set the bar for the whole attitude and atmosphere about this album. Personally I’ve been digging up a lot of old Bathory again and I think that rubbed off. I also know Jonas mentioned Morgoth numerous of times in the same sentences when describing his ideas and I know he carried a Celtic Frost influence that really showed in one of his tracks. Sodomizer’s Morbid Angel influence is once again also blatantly present, as ever. At some times, I’ve had the intention to smear the borders between death and black metal and just throw things back where you wouldn’t be able to define that other than dark, evil and extreme.