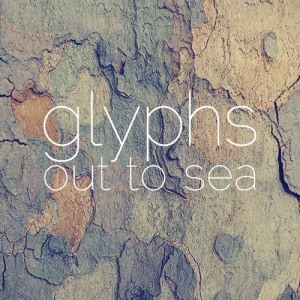 ‘Out To Sea’ is the fourth offering by electro pop duo, Glyphs. With infectious pop melodies and sharp electronic beats, Glyphs immediately attract comparisons with scores of pop acts with electronica sensibilities. However, the appeal of Glyphs does not begin and end with those yearning for the days of fluorescent glasses and extravagant pyrotechnics (I confess my memories of eighties pop might be slightly skewed).’Out To Sea’ carries a definitive modernity, which makes it such a satisfying and enjoyable, albeit short listen.

The glitchy melody of title track, ‘Out To Sea’ is a firm start. Featuring hand claps and affectingly dreamy vocals, ‘Out To Sea’ has the affecting nature and electronic warmness that is so reminiscent of The Postal Service.

‘The Machine’ is arguably the strongest track on ‘Out To Sea’ that particularly demonstrates the talents of Mark Walsh (Vocals) and Matt Wilkie (Producer). The dreamy vocals of Walsh highly complement the broken beats to create a tune that seems to swirl and float around but simultaneously carries a ‘punch’ that transpose it into an infectiously catchy but layered pop song.

The instrumental layering behind EP closer, ‘Man of Straw Man of Stone’ makes it a crunchingly gratifying listen. Wilkie and Walsh appear to really have perfected the art of creating a balanced electronic pop tune that does not get lost within itself, ‘Man of straw Man of Stone’ displays both minimalism and density at exactly the right times.

With no discredit to Glyphs, ‘Out To Sea’ is not a challenging or difficult listen; running at under twenty minutes, the EP arrives, swiftly does its job and leaves again. A quick and very satisfying musical transaction.