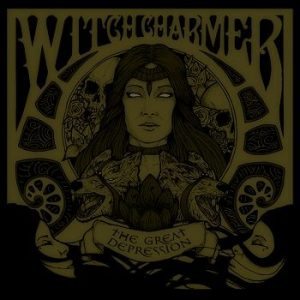 Released on September 1, 2014 via Argonauta Records

After releasing their well-received debut EP Euphoric Curse earlier in the year, Witch Charmer must have realised that they’d set the bar pretty high. Euphoric Curse was an extraordinarily well-wrought debut that displayed a band possessed of a swaggering confidence and a deep and instinctual understanding of all things doom. Like so many of their peers, this was a band that clearly were heavily influenced by the early work of pioneers like Black Sabbath and Blue Cheer, but unlike so many other bands, weren’t content to be hidebound by the doom rulebook. Mixing elements of groove metal, the detuned aesthetic of desert/stoner metal and the progressive blues tendencies of early Sabbath/Zeppelin, Witch Charmer packed as much content into their debut EP as many of their contemporaries covered in several albums-worth of material. The overall impression was of a band with vision, and an ambition to strive towards something new and intriguing, rather than one content to endlessly regurgitate a specific sound.

The Great Depression, then, is Witch Charmer’s first full-length album. The title – one suspects it was chosen with tongue firmly embedded in cheek, with a wink and a knowing smile – nonetheless sets the band’s stall out from the beginning. It’s probably worth mentioning that the cover art – a hybrid of the less-is-more monochrome sleeve art so beloved of occult metallers Venom, and the late 60s psychedelic poster stylings lately adopted by the likes of Blues Pills – is another knowing wink to the band’s inspirations.

‘Suffer’ kicks things off in real style, fuelled by a driving, queasy riff that is equal parts Sabbath and the swampy doom so beloved of the likes of Kyuss and Sleep. Witch Charmer quickly demonstrate once again that they’re not just copyists in thrall to the usual suspects, however: along with the big doomy tritones, they’ve also managed to distil Sabbath’s progressive tendencies. ‘Suffer’ switches gears two or three times, swapping the grinding doomy opening for a propulsive mid-section and an unexpected time signature change at the three-quarter mark that is almost guaranteed to wrong-foot every listener the first time they hear it. Also notable is their extensive use of female/male counterpoint vocals – sure, this is a well-worn trick among the symphonic metal bands, but it’s interesting and effective to see it employed so well here. It’s especially effective because all the vocalists pull their weight: the male vocalists – three of them, no less – turn in dependable caveman growls, some slightly more in a death metal style, whilst Kate McKeown’s bluesy, despairing wail is not only surprisingly powerful but also pleasingly tuneful.

It’s also nice to hear an opening salvo from a band that is so well produced: this is a nicely dynamic record that doesn’t sacrifice space for volume. In a genre where all too often the vocals are almost an afterthought, buried under a heap of fuzzed-up guitars and enormous riffs, it’s practically a revelation to hear vocals thrust front and centre like this.

‘The Cull’ turns up the Sabbath-style dynamics even further, with time signature changes and stop-start turnabouts driving the track in different directions just when you’ve fallen into the trap of thinking the band have found a groove and are content to sit in its pocket. Again, the counterpoint vocals are used extensively and quite cleverly, even going a bit Alice In Chains at one point as McKeown’s vocals take a totally different harmonic direction to everyone else’s: it’s eerie as all hell, and it’s a delight to see a band working so hard to make these things work so effectively on their first full-length release. The lyrics occasionally slip into cliché, but this is a minor complaint when the music is so effective and when the vocals display this kind of commitment.

‘A Watching Of Wolves’ is comparatively by the numbers, but it’s built on a sturdy bedrock, an enormous juggernaut riff that’ll give the low end on your speakers a solid workout. As if to compensate for the more obvious route taken by the song, the next track, ‘To Death (I’ll Drink)’, speeds up and slows down in a truly hypnotic manner, and so dramatically at times that sometimes it sounds like the recording itself has been tampered with. It’s at times like this that the rhythm section really prove their worth: they are more than competent, taking on all the time signature changes without losing sight of that most essential element of doom: the groove. This album grooves like a bastard throughout. Again, the lyric must have pretty much written itself, but the band’s sheer belief makes it all work: you never get the feeling that this is a bunch of posers painting a picture. It all feels grittily real and… well, honest. These guys are clearly not just scene hipsters.

‘Stare Into The Sun’ opens like pure Sabbath, all eerie feedback and a ‘War Pigs’-style slow-mo grinding riff, before taking things up a gear in time-honoured fashion. As the track slowly fades out, a titanic riff powering things along whilst guest musician Tony Reed (Mos Generator, Stone Axe) delivers a torrent of mind-warping shredding guitar, it strikes you just how intense the record is. Happily, if you leave it running, there is a final treat in store, a largely acoustic ‘hidden’ track that acts as the perfect coda, whilst also providing something for the more committed Christians to get fretful about. This is Witch Charmer we’re talking about, after all, and in a world where Sabbath are still asking if God is dead, it seems entirely fitting that an up-and-coming metal band with more than a whiff of the occult about them feel able to serve up a more certain answer to Sabbath’s question for their listeners.

Witch Charmer may have set the bar high with their debut EP, but this first full album more than delivers The Great Depression is a remarkably coherent and capable debut album which demonstrates that the band are more than just the sum of their influences. If they resist the temptation to rest on their already formidable laurels, then they are destined for great things. In the meantime, this is a band that have more than served their time in the trenches and deserve a much wider audience.