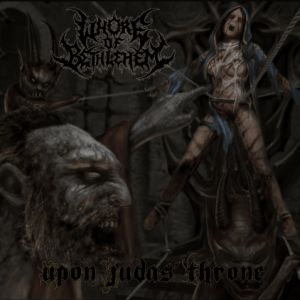 Let me first say, I have a bias towards this band. Coming from my hometown of Austin, Texas they immediately rank high in my mind. Second, having seen this band many times at shows even before I have heard this album. I can tell you they are a great group of guys and musicians. So, with that out of the way, I am just going to say this album rules.

This album is death metal at its greatest. Heavy, fast, loud, and technical as hell. With songs like ‘Christ Crusher’ and my favorite ‘Castle of Meth’. Whore of Bethlehem is the epitome of the death metal genre, but also have a little fun at their own expense.

Whore of Bethlehem’s sound is death metal, but with hints of black metal. What does this mean? It means you get technical meat grinding and demon summoning sonic guitar hymns, all smothered and covered in blast beats. Upon Judas’ Throne is a solid album, that is putting it lightly. Upon Judas’ Throne is full of blasting head banging, hair windmilling action. The musicianship alone and the production is what makes this band and their album stand out. A way which makes it seem to be easy for them to lay down ten of the most blasphemous and brutal tracks on an album. Switching to Immortal style glacial melodies into Cannibal Corpse hack and slash grind. The track ‘Leviathan’s Crown’ shows how Whore of Bethlehem can just juxapose genres and then crush them in an unholy union. This album will always be in my rotation and filed under “brutal as hell”.

Whore of Bethlehem is a solid band. Seeing them at many shows, I can say they always put a solid show on all the time. They keep their music interesting and are true to their style and fans of their genre.

So, if you like death metal; if you like to bang your head, or if you like to blast the most brutal metal in your car and scare your neighbors, this band and album is for you. I would also recommend if you get a chance, you find yourself in the Austin, Texas area, see Whore of Bethlehem. They are a band that is great to hear, but also to experience live. Whore of Bethlehem is currently on tour around the state of Texas. They be playing the Carnival of Death Tour with Suffocation, Kataklysm, Jungle Rot, Pyrexia, Internal Bleeding, and Flesh Hoarder.