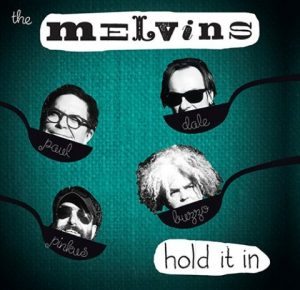 Released on October 14, 2014 via Ipecac Recordings

I got my first taste of The Melvins way back in the early 90’s with the albums Houdini and then a bit later with Stoner Witch and I have to say for me it was all a bit hit and miss. So, it was with some trepidation and hopefully a broader musical taste on my part that I plunge into the upcoming release Hold It In. This new release features Paul Leary and Jeff Pinkus from The Butthole Surfers who are a band who I think are great. It’s kinda hard to believe that The Melvins have been around for over 30 years as a band and this is some feat taken into account that they guys are more critically acclaimed rather than being commercially accessible (you won’t hear many songs from The Melvins on commercial radio stations). Buzz Osbourne or ‘King Buzzo’ as he is at times known and Dale Crover are the two mainstays of the band and they really do things The Melvins way.

So on with the show. As I said before the band has been around a long time and Hold It In is their 22nd release and their 12th on the Ipecac Recordings label, to which Osbourne seems to be heavily involved in with various collaborations along with Mike Patton. I gotta say that the first track ‘Bride of Crankenstein’ is most definitely a Melvins track. A heavy, heavy slow sludge-filled riff with maximum fuzz and really powerful drums with Osbourne’s unique singing/growling style. Going by the lyrics the track seems to be about drugs gone wrong. I am really surprised about how much I like this song, good times!!

Tracks 2 and 3, ‘You Can Make Me Wait’, which is a trippy, catchy tune with plenty of flange on the vocals and ‘Brass Cupcake’, which is an uptempo rocker both are more than slightly touched by the hand of the Butthole Surfers, which is a good thing. ‘Barcelonian Horseshoe Pit’ is a bit of an experimental number that doesn’t really float my boat and kinda breaks up the feel of the album for me. Next up is ‘Onions Make The Milk Taste Bad’ and thankfull it’s back to the good stuff of odd time signatures and syncopated drums. This track is one of my favourites on the album. Track 6, ‘Eyes On You’, is a quick step, stomping tune and ‘Seasame Street Meat’ is a slow stompin’ riff fest.

Another quick punchy tune is track 8, ‘Nine Yards’, and another strong tune. I can’t believe how much my opinion on The Melvins is changing the more I listen to Hold It In. ‘The Bunk Up’ is number 9 with more syncopation and great riffs, which then morphs into a beautiful breakdown (I can’t believe I’m using the term beautiful to describe a Melvins song!!) before building back up again into the main riff. It’s one of the longer tracks on the album at 07:35 but it seems to be over all too soon. ‘I Get Along (Hollow Moon)’ actually has a country vibe off it and is not a bad wee tune, although it won’t make me run and purchase any country albums. The penultimate track is ‘Piss Pisstoferson’ and is probably the most mainstream song on it, but again another great song. On to the last track ‘House of Gasoline’ and a bit of a weird one as from about 3:15 it goes into one of those hidden/experimental type noisefests that I am not a fan of.

So, all in all Hold It In is an album that has surprised me a lot and I am now going to have to return to the two Melvins albums I own and give then another few spins as well as the other 18 or so albums. Consider this album as a conversion to Melvindom. Apart from 7 mins or so of the very last track this is a fresh sounding record with no airs or graces all done in the Melvins way. Buy it, spin it and enjoy it. You won’t regret it!