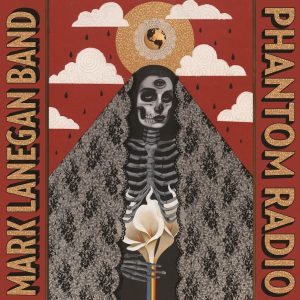 Released on October 20, 2014 via Heavenly Records

Anyone showing signs of confusion as they made their way through Mark Lanegan’s palate-cleansing No Bells On Sunday EP may find themselves initially shellshocked by this full-length offering that takes its inspiration from driving round Los Angeles soaking up 80’s radio. Yet while the initial vibe from Phantom Radio is one of constant surprise, it’s something that settles down well after a couple of plays to become yet another shining milestone in an extraordinarily varied career.

Mark’s press release blurb for this album contains the self-effacing quote that although the Screaming Trees touched mostly on American psych garage bands when forming their own sound, it was British post-punk that they were listening to, “I just waited until I was in my late forties before I started ripping it off.” ‘Barriers’ on their first EP back in 1985 might suggest that they weren’t that averse to be at least slightly influenced by what was going on over here, but their UK indie fondness was largely relegated to occasional background shading on their early records and was completely absent from his solo output that explored (and redefined for a new generation) Americana and Blues. ‘Ode To Sad Disco’ from his genre-distorting Blues Funeral album and ‘Dry Iced’ from the recent No Bells On Sunday EP indicated that a shift was on the way, and Phantom Radio shows Lanegan revelling in a reinvention that probably surprised and delighted him just as much as it will do to everyone else.

It’s hard to connect to an overarching vibe from Phantom Radio, but Gustavo Rimada’s cover art probably invites the better clues: red and gold framing black and grey; and the central solemn, decomposing figure clutching lilies with a rainbow-coloured stalk. Much has been said of Lanegan’s Dark Mark persona, and he dispels much of this at a stroke by putting light up against shade in an almost alternately-occurring pattern to confuse the listener into submitting to the realisation that he’s just as adept at expressing joy as he is delving into his usual dark corners, and in doing so these extremes of bright colour and sunless monochrome are accentuated by their musical neighbours here.

Sat in between opening track ‘Harvest Home’ and ‘Floor Of The Ocean’ is ‘Judgement Time’, a song that draws on much of the imagery that is usually attributed to him but in completely undiluted form so that what previously felt like allegory is presented here as a pure apocalyptic vision accompanied by a voice that sounds incredibly fragile, as though he’s channelling his entire past and associated sorrows into two and a half minutes before heading off on another flight of fancy. This approach is most evident in the case of the pairing of ‘Seventh Day’ and ‘I Am The Wolf’: the latter (a co-write with Duke Garwood) an uncompromising and menacing look deep into himself with suitably prowling and imperilled accompaniment; the former an infectious groove of a track preceded by a laugh, ended with a keyboard flourish that reminds me of early Nine Inch Nails and a chorus that goes “la lala lala la lala la la” and a voice as comfortably smooth as you’ll probably ever hear him sing.

And all of this so far doesn’t even mention the record’s high points. ‘Death Trip To Tulsa’ provides another in a long line of Lanegan’s epic set-closers and something that is bound to become a firm favourite live, ‘Waltzing In Blue’ is a gently psychedelic choral piece that fills any space it happens to be playing in by virtue of some beautiful vocal harmonics delivering a stunning elegy… then there’s ‘Torn Red Heart’. In a career flooded with great moments, this song comes across as Echo and the Bunnymen trying to fit ‘Bring On The Dancing Horses’ into Joy Division’s ‘Atmosphere’ and dovetailing the two perfectly, the euphoric bliss of one song meeting the anguish of the other to come up with something so compelling and moving it almost completely overwhelms Mark’s gentle, breathy and sad vocal. It takes a big song indeed to even try to push his voice away from the front and centre, but it does just that and makes Mark’s performance within it all the more powerful for doing this.

Phantom Radio is, like Mark Lanegan’s procession of fine records, hard to place on any sort of pedestal. He continues to make records that don’t particularly fit any notion of a Grand Scheme, and it’s to our benefit that they don’t. It’s another collection of the good and the great that will leave listeners both wanting more and wondering just where he’s going to head off to next. And long may he continue to do so.