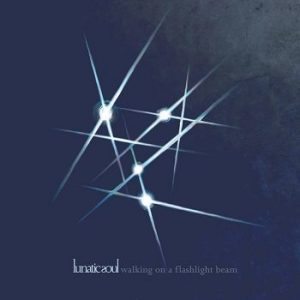 Walking On A Flashlight Beam is the fourth album from Polish rockers Riverside’s Mariusz Duda, working under the name Lunatic Soul. Duda must tire of being asked if the freedom of his work as Lunatic Soul could tempt him away from working with the much-loved Riverside, but despite some similarities in approach – Duda is the chief writer for Riverside as well – the two remain different enough that they happily co-exist, each influencing the other. In many ways, the Lunatic Soul records have been a revelation. Incredibly impressive though Riverside have been and remain, there’s a fragility and spaciousness to the Lunatic Soul material that allows Duda’s formidable muse to strike out in intriguing new directions that aren’t always so evident to a musician working in a band environment. Riverside are masters of in-your-face realism; Lunatic Soul are more impressionistic, more abstract.

It’s immediately evident that this album is very different in mood to previous Lunatic Soul albums. Whereas the first Lunatic Soul album was chiefly concerned with mortality, the second with what happens after we die, and the third in painting melancholic vignettes, Walking On A Flashlight Beam is a story – a story about “someone who thinks he can walk on a beam of light and who doesn’t need more than his own world of fiction.” The subject here is retreat from reality: a search for the kind of solitude that allows creative endeavours to flow through the creators hands. That solitude comes at a price, however: and like the lighthouse-bound antihero of Norwegian progressive rockers Gazpacho’s similarly solitude-obsessed Missa Atropos, withdrawal from the human sphere, whilst it has its own allure, can be limiting, or at its worst destructive.

The album opens with the rushes of icy synth that introduce ‘Shutting Out The Sun’, like the waves rushing up a freezing beach at midnight. The tide really is coming in: this is the sound of Duda ushering you into his universe. The unhurried electronica slowly unfurls like some primordial nocturnal flower; this is not an album of immediacy. Everything happens at a deliberate, inexorable pace, sucking you in and then steamrollering you with its intensity. The title of this opening track should tell you a lot about the nature of the music on offer here. Full of a stark, icy beauty, it bewitches but is at times deeply unsettling. A lengthy, largely instrumental piece, ‘Shutting Out The Sun’ is truly hypnotic – much like the album as a whole, it packs in a lot of content, but is so mesmeric that the changes leap out of the speakers at you like set pieces on a ghost train ride. Here, an interlude of thundering drums gives way to some heavily reverbed vocals from Duda that fade into the echoing blackness before another eruption of drums and Jean Michel Jarre-esque treated samples builds the by-now oppressive tension to breaking point before falling away into the abyss. And Duda is just getting started.

‘Cold’ – despite another deeply eerie synth opening that sounds like it could easily have soundtracked an interlude of The X-Files where Mulder and Scully are creeping around by torchlight in some deserted military silo – is slightly more familiar fare. Built around a masterfully restrained vocal from Duda and chiming acoustic guitar, it feels much more akin to the previous Lunatic Soul albums, at least until a driving electronic pulse ups the momentum. Here it sounds like a gloriously atmospheric lost Underworld song. The play-out, again, is unhurried: gradually building into a crescendo featuring live drums and vocoder, akin to Signify era Porcupine Tree, all creeping menace and glacial detachment.

‘Gutter’ marks a return to the more tribal elements of the first Lunatic Soul album. An oppressive thundercloud of a song built around a vaguely Eastern-sounding riff and an ever-changing backdrop of ticking and clattering percussion, it drills mercilessly away whilst Duda sings that “Fear is what I need, what I need to feel real”, and as the track changes gear, there is a crushing feeling of vertigo, the listener a helpless obstacle in the onrushing traffic of Duda’s demons, his thunderous, snaky bassline propelling the song blindly onwards into the onrushing darkness. Even then, there are times when Duda paints some light onto his dark canvas: swirling vocal melodies and troughs in the relentless, questing rhythm providing some measure of relief before each new onslaught.

This is followed by the light relief of ‘Stars Sellotaped’, a brief interlude reminiscent of Jarre at his most reflective. A cycling synth pattern provides an atmospheric backdrop to impressionistic flashes of sound, like torchlight whizzing past your eyes. The blue and green pinpricks are still all you can see as the album totters into the dark heart of the album, ‘The Fear Within’.

Another eerie instrumental piece, all raindrop percussion and pitch-bent effects, the track is like a spectral, long-dead equivalent of Syd Barrett’s ‘Room of Musical Things’ as heard in Pink Floyd’s ‘Bike’: where ‘Bike’s finale was an expression of madness, locked away from the world in some remote room, this is the sound of loneliness playing on the nerves, the effect of dislocation from human contact playing tricks on the mind. The unease steadily grows, occasional odd noises impinging onto your consciousness over the inexorable rhythm, as if the listener is being stalked by their own imaginings. Again, though, Duda provides some reassurance, a warm hand in the darkness – the presence of a gentle acoustic guitar motif, and the twisting of the icy rhythms into something a great deal warmer, yet melancholic, holds the swirling ghosts at bay. Duda never lets you forget where you are, though, and finally he leaves you alone in the dark, disembodied cries and howls giving way to whispers and an oppressive feel of dislocation.

‘Treehouse’ anchors the album back to the everyday world, its warm analogue vibe sounding like a synthed-up Beatles. After the preceding ghost hunt, it’s a welcome relief. There is a sense that Duda has found the tranquility he’s been seeking: “Can you feel all is quiet? It feels so right.” he says, just as, over in another channel, he has his misgivings. “I guess”, he adds, sounding decidedly unconvinced.

‘Pygmalion’s Ladder’ picks up with another Eastern-sounding riff and percussion-guided momentum. The feel this time is less oppressive but nonetheless somewhat sinister, its snaking rhythm dipping in and out of minor keys in a disquieting, uneasy manner. It’s Egyptian market music for Lovecraft fans, shot through with a spine-chilling water-drop xylophone sound and clattering percussion. “Light and dark, my heart / Despair / Laughter and tears / My voice and your touch”, laments Duda, although there’s still some self-awareness here in his solitude: “Maybe I’m damaged beyond repair / Asleep in my ivory cage with shutters down…” Abruptly the rhythm alters, and the listener is tipped into an icy pit of paranoia as a thunderous rhythm engulfs them again… only for Duda’s inimitable guitar to part the clouds with an oddly triumphant motif, as if Cozy Powell’s ‘Dance With The Devil’ is playing at half speed. It’s a great moment: cathartic, but never losing the gravitational pull the track has already established.

The sunlight is short lived, however, as martial drums and grinding synthesizer riffs disrupt the warmer feel and return us to the darkness, Duda pleading for release from the increasingly oppressive solitude. Here the intensity of his work with Riverside, and faithful collaborator Wawrzyniec Dramowicz on drums, provide the muscle to build the rhythm into a mesmerising, muscular riff that barrels into the listener, only to vanish in a shower of tinkling keyboard and acoustic guitar before abruptly kicking off again, a truly breathtaking moment. At 12 minutes in length, some will undoubtedly cite this as the prog centerpiece of the album: it’s certainly masterful, but without the slow tension of the preceding tracks, would it have had the same impact? Possibly not, but we’ll never know, because Duda is by now a master of sequencing a record in this way.

‘Sky Drawn In Crayon’ serves as a breather before the grand finale, a gentle acoustic piece with suitably melancholic vocal from Duda. “I can breathe a sigh of relief / I acknowledge the end of my closed reality”, he sings, layering vocals and the excited shrieks and laughter of playing children into a warmly nostalgic and affectionate impressionistic wash of sound. This would have made for a fitting finale, but with Duda there are no easy answers. The warm sound collage is replaced with icy stabs of synth and a creeping feeling of tension and unease, and we’re left back in the darkness as the closing title track begins .

Built around warm-sounding analogue synth and a powerful metronomic drum pattern, the title track serves as the credits music to Duda’s film about isolation and dislocation. Melancholic rather than paranoid, the track is all the more warmly familiar in tone and feel to Duda’s work with Riverside, so makes for a pleasingly hypnotic, emotive closer that reassures as much as it reminds us of the rollercoaster ride that we’ve just been on.

Duda’s work with (or rather, as) Lunatic Soul has been a revelation. There’s always the fear that the solo work of a member of a much-loved band will be either at total odds with his other work and be difficult for aficionados to come to terms with, or provide an outlet for a frustrated musician who is simply not happy on board the mothership. Happily, this is clearly not the case with Duda: his work with Lunatic Soul is merely another facet of his work with Riverside. They share an intensity, a focus that all the most impactive music has; they are different in tone but not in feel. With the rock band veneer stripped away, Duda’s muse is permitted to stretch in intriguing new directions, which has certainly had an impact on his work with Riverside, adding new musical armaments to his increasingly impressive arsenal. Each Lunatic Soul album has had a very different tone: the tribal feel of Lunatic Soul, the more celestial atmospherics of Lunatic Soul II, the largely pastoral melancholy of Impressions, and now the dark, powerful, deeply intense Walking On A Flashlight Beam. Impressive as all the Lunatic Soul albums have been, this is almost certainly Duda’s most impressive offering to date. Intensely atmospheric, deeply personal, beautifully wrought and powerfully emotive, this is an unbridled triumph.