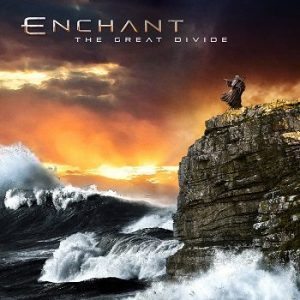 Released on September 30, 2014 via InsideOut Music

Enchant have travelled a difficult road over the years. Since the release of their first album, the well-received A Blueprint Of The World in 1993, the band have won a small but loyal following but have been unable to capitalise on their early success. Overshadowed in no small degree by the rapid success and notoriety of other, superficially similar bands that made a lasting impact around the same time – most notably Dream Theater and fellow West Coast prog legends-in-waiting Spock’s Beard – Enchant struggled to attract the same kind of attention. A line-up change or two, and a comparative lack of attention and live performances, relegated the band to second-tier status. After delivering the sturdy but uninspired Tug Of War in 2003, the band slipped into a lengthy hiatus, largely due to its members being busy with other things: frontman Ted Leonard spending time with Affector, Thought Chamber and ultimately filling the vocal spot in Spock’s Beard, keyboardist Bill Jenkins touring with Simon Collins’ band Sound Of Contact, and all of the members spending more time with their families.

The Great Divide, then, is Enchant’s first studio album in a little over a decade, and their eighth to date. Chief songwriter and guitarist Douglas Ott has admitted that he wondered if the band would ever make another record as time slipped by, but also that he feels Enchant feels revitalised as a result of the time away.

‘Circles’, the opener, certainly bodes well, with a promising groove. The immediate impression is one of a band that has re-discovered a bit of its earlier swagger; however, although the song returns to that highly effective groove for each verse, the bridges and chorus lack the same kind of intent. Jenkins’ nimble, exploratory keyboard work provides most of the fireworks, but Enchant still have a disappointing tendency to get stuck in a repeating pattern without significantly developing it; the mid-section of this song is a perfect example. Leonard’s vocals are impressive as usual, and there’s some interesting use of a voicebox/vocoder. There’s no question that everyone can play extremely well – Ott’s squalling guitar solo towards the end is pleasingly extravagant – but there remains something contrived and deliberate about Enchant’s approach to writing. There feels to be little in the way of spontanaeity, and certainly at this early stage of the album, it seems that very little has actually changed in the decade since their last album.

‘Within An Inch’ manages to display part of the band’s problem by essentially following the exact same blueprint as its immediate predecessor: chunky cycling groove in the verses, sparse repeating pattern for the bridge, arpeggios aplenty in the chorus, drum roll and then a return to the start. The resulting song is expertly played, but inspiration again feels to be rather lacking – except, that is, for Jenkins, who turns in a spectacular keyboard solo to round things off. His development has been something to behold, and given performances like this, it’s small wonder that Sound Of Contact felt he was the right man to fill their keyboard stool.

The title track kicks off sounding remarkably like mid-90s Dream Theater, albeit without the metallic crunch. In some ways this is symptomatic of Enchant’s other chief problem: they often feel as if they are rather late to the party. Some of this material does feel very much like songs written by other bands back at the dawn of the Third Age of prog in the mid-90s. There’s some Dream Theater here, some Spock’s Beard there, a hint of 1980s Rush, even some Tiles. As homages go, it’s immaculate, but it’s often hard not to feel that that’s pretty much all that this is: a homage. This song in particular is a real disappointment – it stays stuck in second gear throughout, with only Ott’s ornamental guitar solo, equal parts Dave Gilmour and Alex Lifeson, to hold the interest.

‘All Mixed Up’ sounds a lot more convincing, a chunky opening riff and nimble keyboard work paired with an excellent Leonard vocal that delivers the kind of intent that has been lacking so far. The rhythm section also work very hard here to provide the muscle that the song deserves. Perhaps unusually for a very prog-oriented band, sometimes Enchant seem at their most effective when working within the confines of more concise song lengths – this, the shortest track on the album, eschews the numerous irritating fade-outs that plague the rest of the album and delivers a song that possesses the kind of power and intent that the band seem prone to losing when allowed to stretch out.

‘Transparent Man’s call-and-response verse vocal and tricksy percussion – drummer Sean Flanagan dividing time cleverly to provide the song with an extra twist – holds the attention, but alas the repetitive choruses lead to the song rather wearing out its welcome. Even one of Ott’s excellent solos can’t save the song from it’s slightly bland rock radio feel. It peters out into a wash of cymbals, sorely lacking in genuine excitement.

Happily, it would appear that the band have, in time-honoured tradition, saved the best of their work for last. ‘Life In A Shadow’ again benefits from its brevity, Ott’s tasty melodic guitar the perfect partner for Leonard’s most emotive vocal on the album. Memorable in a way that most of the more obviously progressive numbers here struggle to accomplish, it’s an unexpected highlight. Possibly this arena is where Enchant’s real strength lies, and if they can find a way to marry this melodic gift with their technical chops, they may yet surprise those who have yet to warm to their charms.

‘Deserve To Feel’, on the other hand, is self-evidently Enchant in full-on progressive rock mode right from the start, with it’s staccato opening riff and unexpected turn-on-a-dime time changes. Happily, it’s a lot more convincing than the earlier longer pieces, given an extra injection of energy by the entertaining duelling between Ott and Jenkins, which provides the tension and excitement that much of the earlier tracks struggle to generate. Leonard is once again outstanding, and it’s not hard at all to perceive why he has been such a perfect fit for Spock’s Beard when you hear him effortlessly tackling material like this. Ott turns in another wonderful solo, whilst Jenkins’ truly eccentric solo spots are a delight. This track has a contagious joy about it that displays what this band is truly capable of. However, once again, the track fades out; by this point of the record, it really feels like this is a band that simply do not know how to end songs.

Final track ‘Here And Now’ opens with the winding of a clock, and the darker tone established here is a welcome change after the carefree feel of must of what precedes it. It’s not hard to see the significance of the theme of the passage of time: “Where have the days gone? / They must have came and went / I should have paid attention” Leonard sings, and the sense of the band seizing the opportunity to re-group after their time away lies just beneath the surface. The ticking in the background gives way to an alarm clock going off, and a fine Ott and Jenkins showcase delivers the coup de grace as the song builds to a suitably monumental close. It’s a thoughtful, emotive number that shows that the band are about more than mere nostalgic homage, and is a strong way to end the album, although yet again it is marred at the final hurdle by a rapid and clumsy fade-out.

The Great Divide will undoubtedly be welcomed by those who have already fallen for Enchant’s retro stylings and instrumental chops after their long absence, but there’s little or nothing here for those who either haven’t encountered the band before, or who have been unconvinced thus far. It is a solid but unspectacular return from Enchant, that frustrates more than thrills. There are too many fade-outs, too much that is safe and familiar, and too little true inspiration. There is unquestionably real talent here – everyone involved is extremely capable and the playing is flawless. However, the albums lacks urgency, lacks verve, and perhaps most crucially, often seems to lack heart. One can only hope that the band who recorded A Blueprint Of The World and Blink Of An Eye haven’t done themselves a disservice, and that now that their forward momentum has returned, their best work lies ahead of them.