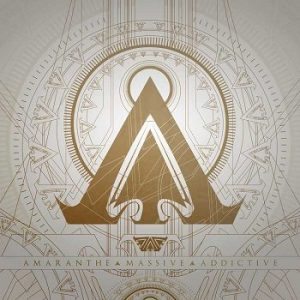 Released on October 20, 2014 via Spinefarm Records

Amaranthe are that rare and precious commodity: a metal band who really do try and push the boundaries of the genre. The Swedes have earned a great deal of ire from the more conservative elements of metal fandom with their very slick, heavily produced brand of metal: to the degree where some have dismissed them as not being a metal band at all. This is evidence of how ridiculously blinkered genre fandom can be: love them or hate them, Amaranthe are clearly and identifiably a metal band. All the elements of modern metal are here to some degree: the chunky drop-tone riffing, the thundering double-bass drumming, harsh vocals and the occasional spiralling guitar solo. Where the purists get upset is with the short, unashamedly commercial songs with instantly memorable choruses, the extensive flourishes of studio wizardry (everything from Eurodance programmed beats to stutter edits and the heavy use of vocal treatments) and the fact that the band aren’t timid about their co-opting of tropes from other genres.

This, their third album, is in many respects business as usual. If the band’s previous albums weren’t your cup of tea, Massive Addictive is unlikely to be the album that changes your mind about the band. It is, however, their slickest and most polished offering too far: they’ve taken their pop-like approach to huge choruses and their heavily layered vocals further than ever before, and the various dance and pop influences are more carefully integrated than on their previous two albums. In retrospect it was clear that they were becoming bolder about weaving these influences through their music with each successive record; in many ways Massive Addictive is the logical apotheosis of their carefully-crafted sound, and existing fans are bound to hail it as a defining record for the band. Since second album The Nexus, there has been a single change of personnel: harsh vocals are now provided by Henrik Englund (of Scarpoint) following the departure of Andreas Solveström after the Nexus tour. As expected given his pedigree, Englund does a sterling job throughout; his slightly more metalcore-friendly approach giving the band a touch more aggression when he takes the mic.

‘Dynamite’, opening with the sound of someone lighting a fuse and a fusillade of frantic keyboard over a cycling riff reminiscent of Evanescence, is a fine opener – memorable, and effective in that it sets out the various elements of their sound with some style. Bubbling synth, heavily layered vocals, Elize Ryd’s clean and powerful female vocals, harsh vocals, treated vocals, a muscular driving rhythm, dancefloor-friendly beats and a staggering Steinman-esque production are all present and correct. In many ways it’s like a brief restatement of the band’s sound before they get down to business.

Second track ‘Drop Dead Cynical’ was the song chosen as the album’s lead promotional single, and it’s plain that it was an excellent choice. The song is built around a crunching riff that is a close relative of Marilyn Manson’s ‘The Beautiful People’, and the alternating harsh vocals and Ryd’s powerful vocals in the chorus make for a striking contrast; for good measure, the band also throw in some of the most overt use of studio trickery on the whole record, with Eurodance beats, stutter edits and heavy use of synthesiser to display more clearly their intent to really blur the lines. Possibly against all odds, it works stunningly well – in many ways it’s simultaneously the most adventurous and most crowd-pleasing song on the whole record, which is no mean feat if you think about it.

Happily, the record doesn’t let up after nailing its colours firmly to the mast. ‘Trinity’ – after you’ve played “spot the Star Trek: The Next Generation sample”, or perhaps that’s just me – ups the dance/pop influences still further, yet still manages to find time to squeeze in a respectable shredding guitar solo. Some of the band’s detractors opine that this band lack the technical ability to make more complex songs; on the evidence of their performances on this record, nothing seems further from the truth. Make no mistakes, Amaranthe’s music is the way it is not because it has to be, but because that’s the way it comes into being. This is not a cynical record, created purely to get on the radio, to shift huge numbers of records; it may be anathema to those who prefer more flesh on the bones of their music, but Amaranthe’s music doesn’t appear to be created in a lab. It’s how these musicians sound when working together, for better for worse, whether the listener likes it or not – and in the end, what could be more metal than that?

The fittingly addictive robot-pop of the title track, like Britney Spears guesting with Marilyn Manson, makes way for ‘Digital World’, another triumph as the techno-rock of Linkin Park collides with the crunch of 90s Metallica and the pop sensibility of Abba to grin-inducing effect. The more melancholic ‘True’, however, slips into a slightly treacly mix of Evanescence and Within Temptation at their least preposessing, lacking the unselfconscious genre-blending of the previous tracks, and comes off as slightly underwhelming as a result.

Sadly, the record takes time to recover from this, although there are times when the band snap out of their comfort zone and deliver the goods: the none-more Eurovision ‘Over And Done’ is a very pretty and surprisingly emotive number, whilst ‘Skyline’ is a magnificent battle cry, equal parts Nightwish at their power metal extreme and Within Temptation at their anthemic fist-in-the-air best, with a thundercloud middle eight that will have Lacuna Coil fans in raptures. However, the repetitive and unengaging ‘Unreal’ – a somewhat underwhelming mid-paced ramble (albeit with a superb little guitar solo, all the more effective for being so unexpected) – is a disappointment, and ‘Danger Zone’ is pure Gorgonzola, a dappy lyric and uninspired chugging riff conspiring to stop the song ever really catching fire despite sterling vocal performances from all the vocalists, Ryd and Englund in particular. The low point of the record, happily it’s soon left in the dust of the scrambling energy of the subsequent ‘Skyline’, which recovers the records poise in record time. The following ‘An Ordinary Abnormality’ ups the energy level still further, constantly threatening to trip over itself as it blasts away towards the horizon. After the mid-album sag, these two songs restore the lost momentum just in time for closer ‘Exhale’, which dials things back down again, albeit in some style, Ryd’s emotive vocal easing the listener out of the album with some genuine pathos.

In some ways it is frustrating that Amaranthe have honed their songcraft so relentlessly that nothing here clocks in at longer than just over three and a half minutes. In one sense it is great that there is no fat to trim – the whole album clocks in at a trim 41 minutes – but you can’t help wondering what this band would do with more space. If some of the descriptions of the tracks above sound over-familiar, or if they seem to run into each other, then Amaranthe’s achilles heel is becoming evident. As intriguing as the band are stylistically, and as beautifully rendered as the material is, there is a sneaking feeling, three albums in, that the band are in some small danger of running out of genuinely new ideas. It seems churlish to accuse the band of delivering nothing more than empty musical calories, since the material is undeniably memorable and they plainly channel plenty of thought and emotion into it, both in the studio and on stage. For all that, though, Amaranthe’s schtick is becoming rather familiar at this point. Time will tell whether they have the spirit to experiment further with their sound, or if the law of diminishing returns sets in, making a sound that at first was thrilling (or at the very least fascinating) lose its impact through repetition and self-replication. They clearly have the ability to evolve their sound; the question is whether or not they have the will.

In the meantime, Massive Addictive is as close as makes no difference to a definitive stylistic statement for the band. Slick, highly polished and unabashedly commercial, it won’t be everyone’s cup of tea, but it is nonetheless a highly accomplished piece of work that will undoubtedly make the band new friends as they go forward.