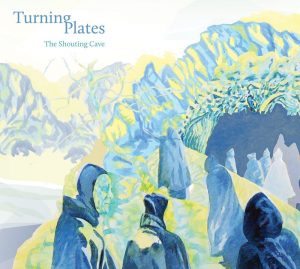 Released on September 22, 2014 via Bigcartel

I feel that Turning Plates are deserving of a short introduction before the process of hardcore reviewing begins. ‘The Shouting Cave’ is Turning Plates’ debut album which was partially funded by Creative Scotland. The quintet that forms Turning Plates consists of Duncan Sutherland (vocals and guitar), Jason Matthews (piano, clarinet, synth and bass), Jackie Baxter (cello), Tom Smith (trombone and violin) and Stephen Coleman (drums and percussion). Turning Plates have been together since 2011 and met through Duncan Sutherland’s search for band members through Gumtree. Quite a fitting history for a band delivering a concept album concerning the effects of the digital age.

Now. To the music!

Before I even listened to Turning Plates debut album, I was immediately intrigued by the idea behind it: ‘The Internet is the purest reflection of humanity, a world built entirely of our own thoughts, emotions and desires’. This is not an album about USB ports and 4G: ‘The Shouting Cave’ has the intention of questioning the effects of the web and what it tells us about humanity. It presents the idea that the internet is the purest reflection of the hopes and desires of humanity. The viewpoint that there may be more to the relentless domination of the internet than the culmination of brain dead bodies reciting Amazon prime adverts amidst burning buildings is definitely a welcome one. There is no straight narrative to ‘The Shouting Cave’; it consists of individual stories that each have a common theme. With their intriguingly luscious sound, Turning Plates make their debut a truly beguiling one.

If I could describe how Turning Plates sounded with one word, it would be ‘warm’. Not using the word as a term for any negative connotations, but rather that the soundscapes that Turning Plates create are wonderfully vibrant and cohesive. This creates the effect of sounds melting into each other to produce very pleasant sounding layers. Turning Plates ability to make seemingly sparse instrumentation sound epic and loud is a trait that is thankfully present through ‘The Shouting Cave’. First track, ‘Avatar’ is a fine example of this; Cinematic trombone coupled with Sutherland’s smooth vocals leads onto colourfully strummed acoustic guitar, which culminates in a satisfyingly rich crescendo.

There is a real vitality to ‘The Shouting Cave’ when listened to in its entirety. It is perhaps an unnecessary and elementary statement to make on a review, but the song writing on ‘The Shouting Cave’ is just very very good. There are no songs on this record that sound recycled which is of obvious merit to the band. The amount of effort that has gone into the writing and recording process is glaringly obvious. Songs such as ‘Falling Lives’ really sells Turning Plates in terms of musicianship and production; A lesser band would struggle to pull off such a slow burner effectively but here it is pulled off magnificently (Sutherland’s impressive vocal display is a must hear). The video for this is worth checking out:

The Shouting Cave is an album where transitions between songs are so important for the listening experience. The quiet instrumental ‘Wild Roots’ leading onto the ‘Evil Man’ still leaves me open mouthed. The changes in tone present throughout the album succeed in scrapping away any of the potential monotony and keeping the listener hooked in. It may be a cliché to declare that an album should be listened to in its entirety, but in this case it really does have to be said. Not only will the lyrical mood of the album progress (album closer ‘The Human Isle has particular significance), but a full listen feels like a musical jigsaw that is slowly being pieced together.
?
‘Rare Air’ is one of many album highlights, a real up – lifter of a song that just elevates the listener: ‘I am in my spring, I am green tinged and I am flying’. The violin and cello playing are irresistible; this song will be stuck in your head for weeks. ‘Rare air’ is a prime example of Turning Plates ability to arouse emotions with dramatic music and endearing lyricism. ‘Animals’ has a hip shaking groove to it that manages to remain brooding thanks to the sparse guitar line and perfectly complemented violin, it is a song that makes the classical music background possessed by some of the band very clear. On top of this ‘Take me to Medusa’s lair’, is one of the best song openers I have heard.

As I’m writing this I am all too aware of stacking superlative upon superlative to write about this release. Nevertheless sometimes high praise is deserved. It is very hard to talk about such an interesting project without a large amount of enthusiasm. This is definitely one of the most interesting albums I have heard this year; if you are reading this, I implore you to go out and enjoy it.