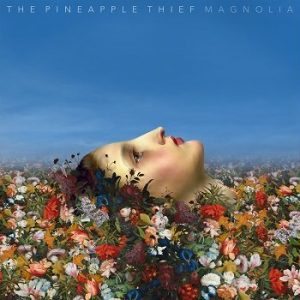 Bruce Soord has had a difficult couple of years, and not for the first time. Long-serving drummer Keith Harrison left the band shortly after the release of their last album All The Wars, and threw the band into a spin, a period that Soord now describes as “profoundly sad”. However, one of the reasons that Soord is so beloved to The Pineapple Thief’s fans is that he wears his heart on his sleeve, and listening to Magnolia, there’s no question that the band’s trials and tribulations have inspired Soord to turn in one of his strongest collections of songs to date.

All The Wars was a tough act to follow. The band had upped the ante in numerous ways, working extensively with real strings for the first time and creating a hushed, intimate yet symphonic sound that was the perfect foil for Soord’s choked, lovelorn, world-weary songcraft. However, in hindsight, there was a sense of a band in transition. The aching, heartbroken ballads mixed perhaps a little uneasily with the full-tilt, dark, meat-and-potatoes rock that comprised the bulk of the band’s previous album, Someone Here Is Missing. It seems like the band were searching for the means to glue to the two extremes of their work together. Magnolia demonstrates that they have found what they were looking for.

Nowhere is this more perfectly illustrated than in the opening track ‘Simple As That’. A low-key, almost spoken intro slowly builds up into a veritable explosion of power, and the song is a perfect storm of The Thief’s fearsome syncopated riffing and Soord’s typically passionate delivery. Here, then, are both sides of the band melded perfectly into a perfectly-proportioned four-minute slice of all that is great and good about this band.

Another thing that is immediately apparent is just how beautifully recorded and mixed Magnolia is. The guitars roar, the drums thunder… and yet there’s plenty of air in a wonderfully spacious mix that ensures none of the fine detail that the band regularly pack into their music is lost. Sometimes in the past their dense and detailed sound has suffered when confined to the studio, but Magnolia is unquestionably the best-sounding record the band have made to date.

The album may deliver a knock-out blow right out of the gate, but if there was any concern that they may have peaked early, the rest of the record is ample reassurance that they have plenty of tricks up their sleeve. ‘Alone At Sea’ serves up another sturdy rocker, whilst ‘Don’t Tell Me’, built on a shuffling drumbeat and a lush bed of soaring strings builds steadily into a yearning ballad that may just be one of Soord’s finest hours. The title track is a heart-piercing song of support and strength for a comrade beaten down by life: “I thought I’d lost you to everything you’ve lost / Your broken heart / I thought I’d lost you under the cover of night”.  Another wonderful string arrangement marries beautifully with some of Soord’s finest tortured guitar lines to deliver another highlight. The fact that this is followed by the beautifully tragic ‘Seasons Past’, all tentative piano, cello, and Soord at his most poignant and reflective, is almost too much to bear. Soord even turns in an increasingly rare solo – he is notably reticent about extended soloing, but when his solos do appear, they are not technical exercises but wonderfully soulful and – that rarest of things – so memorable.

‘Coming Home’, on the other hand, is the band at their most baleful and mordant, with a lyric that sounds as much like a threat as it does a promise enshrined in a lumbering groove underpinned by queasy strings and cavernous bass. It is perhaps a distant cousin of the epic ‘Too Much To Lose’ from Tightly Unwound, but perfectly distilled into barely three minutes. This is a feature of Magnolia, more so than any of the band’s other albums: every song is beautifully concise. There are no ten-minute epics here, yet the band still sound very much like they’ve always sounded – a neat trick that so few bands seem able to pull off.

More uneasy balladry follows, with ‘The One You Left To Die’ serving up a simmering tension that builds into some powerful riffing before sliding away under an acoustic coda, before ‘Breathe’ crashes in with a sledgehammer riff. This is an especially powerful track that switches gears between mid-paced introspection and full-on rock euphoria with ease, and crams a great deal into its brief running time. Hot on its heels is ‘From Me’, a remote lament built on minimal piano and plaintive strings that somehow manages to be briefer still. Truly, Soord’s ability to shoehorn the feel of an epic into three or four minute songs is something to behold.

The closing trio of songs is especially strong, with the stamping rocker ‘Sense Of Fear’ dovetailing wonderfully into the restrained ‘A Loneliness’ before delivering the truly astonishing ‘Bond’, a swirling,  anthemic number which crams everything fans have come to expect from The Thief’s epic album closers into under five minutes. It’s a blaze of fist-in-air pyrotechnics, an outstanding string arrangement reaching for the sky whilst the band powers towards a typically uplifting finale.

Whilst the progressive rock fans that took them to heart in the early 2000s may find the band’s delight in a more concentrated and streamlined approach puzzling, they perhaps shouldn’t be too concerned. Whilst there are no epic progressive rock extravaganzas on offer here, all the hallmarks of The Thief’s best work are here in spades. At the same time, their meticulous quality control and spirited performances, allied to their memorable songs, surely mean that the crossover success that the bands fans have long wanted for the band cannot elude them much longer. There is absolutely no sound reason why The Pineapple Thief aren’t a radio staple, beyond the simple fact of limited awareness of their work, and in a world where bands like Muse, Biffy Clyro and Foo Fighters are million-selling huge concert draws, The Pineapple Thief richly deserve their time in the spotlight. Magnolia is a dizzyingly thrilling showcase of all that is good and great about this superb band. One can only hope that their time has finally come.