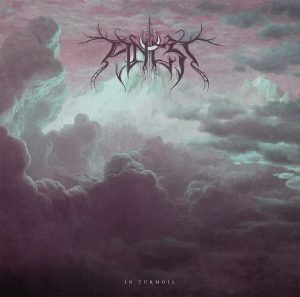 Released on August 31, 2014 via WOOAAARGH Records

Releasing many splits and EPs since their formation in 2011, Ancst now released their full length, In Turmoil. I was a little excited about getting to review this album, I appreciate my metal with a little bit of punk in it. Ancst does just that; with lyrics that are about political/ social struggles, combined with melodic black metal guitar harmonies and pounding double bass drumming.

In Turmoil is a seamless mix of both genres of crust and black metal for 13 tracks. Diehard fans of black metal might think this album a little to much on the punk side, but I like the mix. Opening with a dark ambiance, you would think this album would play more into the darker side. But yet, the first ringing guitar notes are more along with post-hardcore. In Turmoil has more gruff vocals searing out in a more emotional tone then the abyssal screams of traditional black metal. While the influence of black metal is there (their sound is close to a Swedish layered black metal sound), this is not a black metal album. But make no mistake, this is an album that is worth listening to.

In Turmoil is an album of darkness and negativity, but a negativity which needs to be expressed in a way which brings hope. A hope in a dismal world. Even with all the negativity that In Turmoil projects, this album is full of a mix of emotions, which scream out on every note. Thundering drums and sonic guitars and moments of melodic suspensions. This album is well played and keeps the listener involved with shifting times, emotions, and themes.

In Turmoil is a great album and well produced. The tracks flow well and are heavy as hell! Again, while most über-kvltists will shun this album, if you like your crust black and dismal, this is the album for you. Ancst is currently on tour around Germany, this will be a great act to catch if you can.