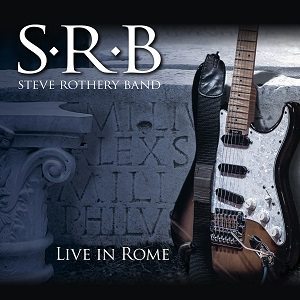 Out on August 25th through

There's little that is more likely to strike fear into the heart of any music fan than the idea of the "guitarist solo album", especially in the rock idiom. So often they are merely showcases for soulless technical show-boating, as the guitarist in question blazes heedlessly away as his audience slips into a coma. This is doubly true when the album in question is a live recording and the guitarist is not forced to brevity by recording formats.

Happily, Steve Rothery is not from the Yngwie Malmsteen school, where louder, faster, better, more is the order of the day. He is best known for his 30 years and change as one of the key members of British progressive rockers Marillion, under whose mantle he's delivered some truly extraordinary playing over the years. Marillion graduated quickly from emulating their 70s prog heroes to blazing their own trail, producing thoughtful, atmospheric and powerfully emotive music. Their aesthetic is one of powerful restraint, and it's clear that Rothery plays a key role in ensuring that the band adhere to that rule of thumb.

Amazingly, despite his long tenure in Marillion, it is only this year that Rothery will release his first solo album, The Ghosts Of Pripyat. Tales are already legion about the astonishing success Rothery enjoyed when crowdfunding the album. Unsure about how many fans would be interested in an instrumental solo album, Rothery decided to use Kickstarter to fund the album, accruing his funding target in under a day - ultimately the campaign reached £60,000 very quickly indeed, several times his original target. This is not just a measure of the devotion of Marillion fans but also a testament of the fondness the progressive rock community share for Rothery and his playing.

The Ghosts Of Pripyat is due for release in September. In the meantime, fans have been able to enjoy not one, but two live releases featuring the material that Rothery has been putting together. This is the second of these two releases, designed to give fans a work in progress preview as Rothery puts his band through their paces. Here is the chief difference between the stereotypical guitarist's solo album as described above and what Rothery has delivered here: Rothery's name may be the draw here, but he has assembled a formidable band in order to record and play the material, and whilst Rothery's chameleonic guitar is the centrepiece, all the players are given crucial roles in bringing the material to life. This is no vanity project: it is a living, breathing entity all of its own. Rothery's bandmates here include Mr. So & So guitarist Dave Foster (a long term friend and collaborator), ex-Mr. So & So drummer Leon Parr (who has deputised for Marillion's Ian Mosley in the past), Panic Room's Yatim Halimi on bass, and Italian progressive rockers Ranestrane's Riccardo Romano on keyboards. The band has been working together on Rothery's album since last year, and clearly the intervening time has seen them grow together into an extremely effective unit.

Marillion fans will already be familiar with Rothery's gliding, effortless playing, and unsurprisingly there is a great deal of it to enjoy here, as Rothery's lead guitar effortlessly fills the void left by the absence of a vocalist. Rothery is a fluid and lyrical player in the Andrew Latimer/ David Gilmour school - both players that Rothery has professed his admiration for in the past - and the instrumental nature of his self-penned material gives him ample room to stretch out and deliver both sturdy, thoughtful structural playing and expansive soloing of the type guaranteed to delight his existing fans. The material nimbly shows off the various sides of Rothery's playing: opener 'Morpheus' is a languid, unhurried bliss-out that slowly builds momentum into a euphoric finish, whilst 'The Old Man Of The Sea' begins innocently enough before erupting into a firestorm of some of Rothery's most uninhibited and frenzied soloing and finishing like a freight train. 'Kendris' - the only one of Rothery's solo contributions here that clocks in at under 10 minutes - is a slowly unravelling nest of gentle, almost tentative Eastern-flavoured lines that steadily grows in confidence and arriving at a suitably forthright conclusion, and 'White Pass' is another slow-burner that builds steadily through some darker textures into some sturdy riffing. 'Yesterday's Hero'  is a mid-paced canter with a delicious Knopfleresque intro that also provides a stunning showcase solo, and 'Summer's End' builds to a truly barnstorming climactic blow-out that sees Rothery trading formidably intense solos with Foster in a suitably face-melting manner.

Rothery's solo material - six tracks in all - makes up the first disc of this collection, and this performance makes a strong argument for the idea that when The Ghosts Of Pripyat arrives, it will have been well worth the lengthy wait for a solo record from Rothery. Perhaps the only real concern at this point is whether the studio album will capture the same magic these live recordings possess, but as all the musicians involved are the same, hopefully this is lightning that can be bottled again.

The second disc of this release comprises a collection of some classic Marillion songs, all notable for containing some of Rothery's best loved performances with his band. Obviously, however, songs such as these require vocals, and here they are provided by two guests, Italian natives Manuela Milanese and Alessandro Carmassi. Whilst naturally Milanese and Carmassi can't replace the effortless charisma and sheer vocal firepower of Marillion's Steve Hogarth, or indeed his predecessor, Fish (aka Derek Dick), they both acquit themselves well. Milanese is especially potent on the powerful ballad 'Waiting To Happen', the long vocal lines well suited to her vocal style, and turns in an impassioned 'Sugar Mice'. Carmassi imbues fan favourite 'Easter' with the required pathos and does a fine job with the demanding 'Afraid Of Sunlight', although he struggles a little with 'Cinderella Search', where he sounds entirely too tentative for the first half of the song. What is remarkable is how accurately Rothery's band manages to reproduce the subtleties of the Marillion material. Of particular note here is Riccardo Romano's turn on keyboard; keyboards are an integral and crucial part of the Marillion sound and have been notoriously difficult for other musicians to get right.

The set ends with two tracks from Italian band Ranestrane's concept album A Space Odyssey. Romano is a member of Ranestrane, and both Rothery and Marillion's Steve Hogarth guested on the album, so there is a welcome symmetry here, especially played in front of a largely Italian audience. The Ranestrane material is pleasingly atmospheric and gives Rothery a chance to display his fine melodic sense. The closing 'Materna Luna' builds to an almost metallic climax and makes for a superb way to end the set.

All the Rothery solo material here was also included on the previous live set, Live in Plovdiv, so the question for less committed fans may be "What's the difference?" It has to be said that the band feel more comfortable with the material, sounding rather less tentative than on the earlier recording - this is especially true of the rhythm section, as Halimi and Parr sound even more in tune with each other than they already were; their interplay on some of the longer tracks is memorable, especially on 'The Old Man Of The Sea', where it borders on the telepathic. Rothery is also to be applauded for electing to play whole songs from the Marillion back catalogue, rather than link together solo set-pieces as he did for the Plovdiv performance: these are songs that really require all their pieces to work their magic.

A delight for Rothery's existing fans, this is also a fine record of Marillion's legendary guitarist doing what he does best. Rothery's enormous influence on a whole generation of guitarists may go largely unmentioned outside of the progressive rock scene, but this live album is a timely reminder of the scope and passion of his playing. For those new to Rothery's work, this album also serves as an enjoyable and memorable showcase for one of the UK's true guitar virtuosos, and the much-loved work of his mothership band to boot.