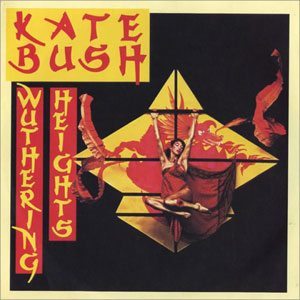 It's true what they say - the older you get, the more past events slip through the mists of time and are lost to you somewhere beyond the veil. A few very vivid occurences aside, most of what happened to me before the age of about eight is lost to history. One of those few very vivid events is as clear to me now as it was yesterday, though. It was the day I first heard Kate Bush.

On Thursday, February 16th, 1978, I was five years old, having started at primary school the previous September. I lived with my mum at my grandparents small terraced house, my erstwhile father having long since disappeared from the scene. My mum worked as a staff nurse, and also part-time in a restaurant in town, to make ends meet. Considering the demands on her time and how tiring her endless parade of night work and long mornings and afternoons between shifts at the restaurant must have been, she spent an amazing amount of time with me - between her attentions and those of my grandparents, I never wanted for attention or things to occupy me.

Those precious evenings when she was at home rather than at work were often spent practicing my reading or basic maths, playing board games or watching TV. I owe a great deal of my taste in TV to my mum, who despite a weakness for Crossroads (the big British soap opera of the day) loved science fiction and fantasy (Star Trek, Dr. Who, Blake's 7 and later Battlestar Galactica were all favourites that we both never missed) and watched a lot of factual programmes - the whole family were absolutely transfixed by David Attenborough's ground-breaking Life On Earth when it started airing around this time, and I've had a deep and abiding love for nature documentaries ever since. But one show my mum never missed - and consequently I never missed it either - was the BBC's Top Of The Pops.

At the tender age of five, I was entranced by the glitz and sparkle of the pop acts as they strutted their funky stuff (and this was the 70s - there was a lot of funk and disco on Top Of The Pops, even as punk was beginning its strangled death rattle) and the rhythmic nature of so much of the chart music really appealed to me. I've been told several times that the family were convinced that I would want to play the drums when I got older, and that they were all busily engaged in trying to work out how that would be in any way possible in a terraced abode - it's a good job I didn't, as my sense of rhythm is akin to that of a robot trapped in a magnet factory, but I digress. To my five year old consciousness, noisy + shiny = good. And so it went, week in and week out, with me enjoying the process of watching Top Of The Pops and the colourful songs, but never really engaging with them, never really understanding what was going on.

However, one song that was on that fateful edition of Top Of The Pops was to change all that forever. My mum and I were seated in the near-darkness (the only light came from the TV screen and a little tabletop lamp) in the usual fashion, next to each other on the little settee. I was gleefully jiggling along to the beat as usual, when a song came on that was like nothing else I'd ever heard. It was being sung by a pretty girl in simple black clothes, and the flashiness of most of the other acts was noticeably absent. Her voice was very unusual: a ghostly, imploring wail. I must have suddenly gone very still and quiet, because my mum turned to me in her usual solicitous way and asked, "OK, duck?" "Uh huh", I said, unable to tear my eyes from the screen. "Who's that, mum?" My mum shook her head. "I don't know, duck. Let's listen, and I expect they'll tell us after she's finished." And sure enough, after the song was over, Kid Jensen told us, "Kate Bush there, with 'Wuthering Heights'."

Bush herself has been famously disparaging about this, her first appearance on Top Of The Pops, calling her performance "bloody awful", but there's still something so appealing about it, so unstudied and heartfelt. For all the uncertain glances at the camera, the slightly nervous vocal (yes, it was a live vocal - something that was to become a forgotten art on Top Of The Pops and indeed music TV programming generally) and her occasionally self-conscious gesticulations, the then only twenty-year old Bush projected an endearing and truly unique persona nonetheless. It's not hard for me, even now, to see the same appeal in that performance that captivated me all those years ago.

I woke up the following morning with 'Wuthering Heights' still in my head. And so it began.

Something must have been triggered in my brain, because I couldn't get the song out of my head. I vaguely remember going into school that day and wandering around singing my own version of the song, which consisted of about two of the lines, repeated over and over again. No-one else really seemed to know what I was on about, but as 'Wuthering Heights' - and Kate - slowly conquered the UK, one radio or TV appearance at a time, something amazing happened: the song - Kate's first release - finally climbed to the coveted number one spot in the singles chart.

Kate was to make a total of three appearances on Top Of The Pops to perform 'Wuthering Heights', and the associated promo video was everywhere as well. Indeed the promo video itself is the other chief memory I have of the song, as it spawned the nickname Kate was destined to have in our house for a few months. Kate appears in the 'Wuthering Heights' video - at least the UK version, as another very different video was prepared for promotional purposes in America - in a flowing white dress amidst a sea of dry ice, performing her own solo choreography to the song. At my tender age I felt she looked like an angel, and that's what she became to me: the "angel lady".

I drove my family insane with 'Wuthering Heights'. Utterly unselfconscious in that marvellous way that only five year olds can be, I steadily memorised the words - still only having the dimmest of ideas what they were all about, although I did at least feel sure that it was a ghost story, something I was delighted to discover that I had been absolutely right about later - and then the choreography. I spent weeks dancing around the neighbourhood singing 'Wuthering Heights', and if you've ever heard me sing, you'll know what a trial that must have been for everyone, as I can't carry a tune in the world's largest bucket and I think I've only improved with age.

My mum was clearly aware that something special was happening, as she took me to buy a record for the first time in my life. I was not a stranger to records: I spent many happy weekend afternoons listening to the radio or to my mum's Beatles and Neil Diamond albums on the long-antiquated record player my grandparents owned, a table-sized four-legged monstrosity made by Argosy that opened like a liquor cabinet to reveal a record deck within, and whose speakers were set into the cabinet itself.

This music was evidently part of my musical make-up by osmosis, but other than a slight fascination with the fact that a flat, almost featureless object could create this huge variety of sounds, I hadn't demonstrated any particular liking for a specific artist... until now. So my mum took me to the local branch of Woolworths, which carried the top 40 singles in neat little racks. "Would you like a record of the angel lady? So you can listen to her on the record player?", I was asked. Well, limited as I now understand it was, the record player did sound a lot better than our little colour TV, so I nodded excitedly - and probably started singing 'Wuthering Heights' again, which most likely told my mum that she was making a huge tactical error, but happily she overlooked the obvious disadvantages in feeding my addiction - and with her help, took a copy of 'Wuthering Heights' to the till. I paid for it with my pocket money, which I had started receiving when I started primary school. Usually my pocket money was spent entirely on sweets or an occasional ice lolly, but I didn't mind in the least that the last month's worth of accrued funds were all spent on a record instead - after all, it was the Angel Lady. This probably set an important precedent for me, as the vast majority of my "pocket money" has been spent on music ever since.

And so it is that I credit Kate Bush with not only being the creator of the first single I ever owned, but also for turning on a part of my brain that had hitherto lain dormant, an area that understood that music was more than just a collection of pleasant sounds, but something that could communicate ideas, stories, and most importantly, emotions.

I still have that single, although unfortunately the intervening time has not been kind to it. The sleeve got scuffed and creased, and I played the record itself to death, until finally, a couple of years later, the A-side developed a skip in it. I never contemplated replacing the damaged single, because by then I had a copy of Kate's debut album, The Kick Inside, which contained both 'Wuthering Heights' and the single's B-side, another wonderfully quirky song named 'Kite'.

But that's another story.

Next time: Dave discovers the joys of 'The Kick Inside', Kate's debut album, and with it the joys of The Album.