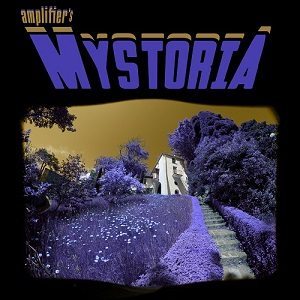 Following the release of Amplifier's sprawling grand opus, The Octopus, in 2011, the band have most definitely had their ups and downs. After the departure of long-time bassist Neil Mahony, the band were forced to regroup and rethink their approach: the lengthy process of writing and recording The Octopus had been a trying experience for all the praise the record subsequently received. Looking backwards to look forwards, Sel Balamir and his band re-visited previously demoed material and used it as the basis for the subsequent Echo Street, a more streamlined and concise record that reassured everyone, not least the band themselves, that their quest for sonic adventure remained undimmed in the face of all that life had chosen to throw at them.

It's immediately apparent that Mystoria is a very different album to Echo Street in terms of sound, although in terms of ethos the two albums are probably closer related than any of the other records Amplifier have made. Mystoria eschews the gentler, more stripped-back feel of Echo Street and glories in its chunky twin-guitar riffing and thunderous rhythm section, much as the band did when they put together Insider and The Octopus. At the same time, the tendency of the band to indulge themselves in sprawling psychedelic space rock jams has been reined in. Mystoria is subject to the same intense focus on trimming the fat that Echo Street was subject to - indeed, the band have emphasised that they spent some time honing the songs and finalising their arrangements before they started recording, something they haven't tried before. On the basis of Mystoria, this approach certainly seems to suit them.

This new sense of focus, allied to their delight in generating planet-sized riffs, is immediately apparent in the one-two punch of the opening tracks, 'Magic Carpet' and 'Black Rainbow'. The opener is a delightfully psychedelic instrumental built around a sturdy riff that might have lasted eight or nine minutes on previous albums. Here it arrives, says what it needs to say and is done in under four minutes, without sacrificing its loose, jammed-out feel. 'Black Rainbow' makes for a striking contrast, a gargantuan doomy riff powering along a muscular rocker that possesses energy to spare. "And I’m going to sing my song", bellows Balamir, "Been stuck in a throat far too long / And I’m going to get me gone / Going to get me some!" As the song crunches to a halt, Balamir opines "Well, we did it again", as if anyone was in any doubt by this point. And so the scene is set for a really crowd-pleasing album, one that will delight existing fans and appeal to those new to Amplifier's swirling psych-influenced rock.

The album has been described as a "party record", with Balamir stating that "It’s a summer time rock record to hopefully make people feel good when they listen to it. That’s the only intent.” In many respects that is absolutely the case. Jammed full of catchy hooks, sing-along choruses and Balamir's trademark guitar, this is an album that impresses immediately, sticks in your mind like velcro, yet has the variety and substance to withstand repeated plays without losing its appeal. Some of the songs here are so quintessentially Amplfier that they might as well have the word 'Amplifier' written through them like a stick of rock: the two openers, the playfully off-kilter 'Bride' and 'Named After Rocky' (which contains a really crowd-pleasing moment as a clearly gimlet-eyed Balamir breaks the fourth wall to tell the listener "Dance toe to toe with the devil /And I’m gonna do you proud / I’m gonna make you proud!") are all good examples of this.

However, it wouldn't be an Amplifier album if Sel and company didn't have something new and unexpected to present: here, the unexpected is provided by a surprising voyage into ska with 'Cat's Cradle' and the baleful, shoegazey 'Open Up'. The former comes across like Kula Shaker re-imagining something from the Madness back catalogue, the unmistakeable skanking ska rhythm underpinned by a wonderful turn by the rhythm section of Alex Redhead (bass) and Matt Brobin (drums), paired with a playful lyric that indulges in some social commentary ("Well, the world is like a cat's cradle / Too much tension in a cat's cradle") and a wry vocal turn from Balamir. 'Open Up', on the other hand, is the song most removed from the sunny, somewhat carefree feel of a lot of the other songs, coming across like 90s indie darlings Lush at their most metallic, a fuzzy wall of sound framed by reverb-laden icy sheets of guitar and a pleading lyric as Balamir asks a lover "Well, are you looking for a man / To try to solve / Well to open up / Won’t you open up?"

The somewhat nightmarish 'OMG' continues this darker thread, a juddering riff and bleak lyric ("Did you look 'em in the eye / As life was choking you / Choking you...") meaning that these two tracks dunk the previously sun-kissed listener in freezing water, enabling them to return refreshed yet unsettled to the remainder of the album, which picks up the more carefree feel established by the earlier tracks. 'The Meaning Of If' may have a somewhat fatalistic lyric ("Well, any simple man can see / That there ain't no cure to the meaning of if / 'Least no meaning I can see") but the swirling guitar that runs through the track is pinned to the wall - as is the listener - by a titanic Sabbath-style riff that intimates that if Balamir believes that the world is going to hell in a hand-basket, he'll be going out with a smile on his face, dancing like no-one's watching.

The album closes with a pair of tracks that are clearly closely interrelated, as the mellow 'Crystal Mountain', with its strong 60s psychedelic pastoral feel and suitably surreal love ballad lyric gives way to a building tension that resolves itself into the wonderfully typical fuzzed guitars and lumbering riff of 'Crystal Anthem', that manages to pack in a truly jaw-dropping storm of squalling guitar before collapsing, exhausted, into a heap. The chorus of 'Crystal Anthem' seems to define both Balamir's world view and the band's approach to Mystoria as a whole, as Balamir sings "And I just want to say / That life is a kind of game / We’ve all been born to play." As with all the best games, life may be sometimes difficult: the path to victory designed by sadists and the pieces easy to lose, but ultimately games are designed to be fun. And the new-look Amplifier, not least Balamir himself, would appear to be playing this game to win.

Mystoria is a resounding triumph for Amplifier. Whilst Echo Street was full of great songs and superb performances, its comparatively sedate feel did sometimes leave one wondering if the freewheeling sense of adventure that so typified the band had been tempered permanently by the problems and setbacks that they'd had to deal with. Mystoria is both a sure-footed restatement of Amplifier's intent and evidence that, like all the most positive survivors, the band have learnt a lot from the bumps in the road. The band that recorded The Octopus are back, older, bolder, wiser, and with a fire in their eyes and in their bellies. Long may it be so.