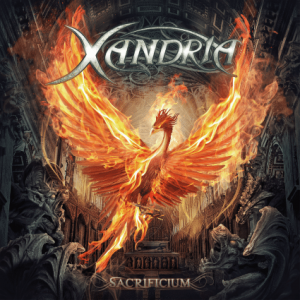 Xandria – always the bridesmaid, never the bride. At least, that’s how it seems. Over the past 17 years, Xandria have turned in five solid albums of quality symphonic metal and attracted a small but loyal audience, but have not managed to reach the wider audience that they probably deserve.

A large part of the problem has been one of continuity: since their inception, they have shed and gained a large number of musicians, seemingly never able to retain a stable line-up long enough to capitalise on any momentum built up by each new release. In the wake of Nightwish’s recruitment of Floor Jansen – their third vocalist since the band’s inception in the early 90s – it’s probably worth remembering that Xandria are now onto their fifth vocalist. Given that the vocalist is so key to the sound and identity of any symphonic metal band, it is perhaps no wonder that they’ve failed to engender the kind of continuing appeal that some of their contemporaries enjoy.

Incoming vocalist Dianne van Giersbergen (no relation to Anneke, for the Gathering fans amongst you) has the unenviable task of replacing several much-loved predecessors as well as trying to put her own stamp on the band’s material. She’s probably best-known for her impressive (and ongoing) work with prog metallers Ex Libris, so is well-attuned to the metal world. Here, away from the frantic soloing and unison playing of Ex Libris, her vocals are given more space to breathe, and it’ll surprise none who have heard her sing with her other band that she turns in a stunning performance here. Perhaps it’s just the nature of symphonic metal, but in this environment she sounds more Tarja Turunen-esque than ever before. Technically, she is more than equal to the task, and it could just be that Xandria have landed on their feet with her recruitment.

Van Giersbergen is not the only new recruit – this album is the first showing for new bassist Steven Wussow. Whilst the spotlight is necessarily shone in his direction rather less often, he acquits himself extremely well here, his thicker, warmer sound less strident but perhaps more fluid than that of his predecessor Nils Middelhauve.

Sacrificium sets out its stall immediately, and with some style: the title track opens the album, all 10 weighty minutes of it, and contains a veritable checklist of everything Xandria fans - and, indeed, fans of female-fronted symphonic metal - might hope for. A portentous spoken-word intro, extensive use of a choir, Van Giersbergen's operatic vocals in full effect and a powerful, weighty performance from the band, who crash in with a fabulous buzzsaw riff and shepherd the epic track through its numerous twists and turns with unquestionable flair. By the time the opener crashes to a halt, it almost feels like you've listened to a whole album - it's cleverly arranged, beautifully performed, and showcases everyone extremely well. It also sounds positively Wagnerian, Joost van den Broek's production is extremely impressive as usual.  Despite everything that's going on, nothing ever gets lost in the mix - quite an achievement in itself.  This is easily Xandria's best-sounding album, a serious sonic upgrade that will have long-term fans giddy with glee.

However, Xandria do have a problem to deal with. By the time that ‘Nightfall’, the second track, is half-over, new listeners will have realised that Sacrificium sounds rather familiar. Both ‘Nightfall’ and ‘Dreamkeeper’ sounds remarkably extremely similar to Nightwish in their pomp - hell, even the titles evoke the Finnish legends' oeuvre, and I'm sure that even Xandria's staunchest fans will probably have to agree that ‘Dreamkeeper’ sounds remarkably like a hybrid of Nightwish's ‘Nemo’ and ‘Ever Dream’ at times - not in a "where's the lawsuit?" way, but the inspiration is clear and fair leaps out of the speakers at you. ‘The Undiscovered Land’ is part ‘Creek Mary's Blood’, part ‘Meadows Of Heaven’. ‘Betrayer’ is part ‘Over The Hills And Far Away’, part ‘Romanticide’. It's as if, whilst Nightwish experiment with their sound, Xandria have set out to pick up where the Finnish band left off - if Nightwish had released Sacrificium as the follow-up to Once, it's hard to imagine anyone would have batted an eyelid.  That's not to say that the band don't deliver some impressive set-pieces from time to time: the arrival of a slow grinding riff halfway through ‘Dreamkeeper’ is memorable, as is the apocalyptic bridge section of ‘Stardust’, and the extended soloing that closes out the title track's sturm und drang. It's just that there's a definite sense that listeners have been here before.

There are glimmers of the true essence of the band, less imitative moments that showcase a band firing on all cylinders and determinedly moving forward, moments that may well have you holding your breath as the band pulls off so dextrously what less experienced musicians in the long since crowded female-fronted symphonic metal arena routinely struggle to accomplish.  Overall, though, Sacrificium sees Xandria drifting further towards a classic symphonic sound, perhaps adopting a few more overt influences from power metal with more, and faster, solo spots and a more anthemic, sing-along feel than previously. The touch of electronica that helped shape the sound of the band in their early years is almost altogether absent now, a change that metal-as-real-music purists may applaud but which leaves the band sounding less distinctive than ever. In polishing their sound, Xandria have lost a little of what set them apart.

This, alas, is the problem in the final analysis. Sacrificium is a slick, powerful record that sounds superb and is filled with superb performances, but there’s little here that doesn’t sound like a number of other bands. In short, it lacks a personality of its own. Van Giersbergen womanfully does her best to invest herself in the material and does an excellent job - to these ears she's almost certainly the most impressive vocalist the band have had to date, and that's saying something - but there is little to indicate any desire on the band’s behalf to truly create their own identity, or to say anything new.  Perhaps the band’s stable line-up has finally arrived and a willingness to colour outside the lines will arrive given time once the band have been playing together a while longer – on the basis of Sacrificium, when that moment arrives, this will be a band to watch. In the meantime, this certainly isn’t a bad record - it's a very enjoyable one, and Xandria have raised their game substantially - but for all the polish, it lacks originality and an identity of its own.