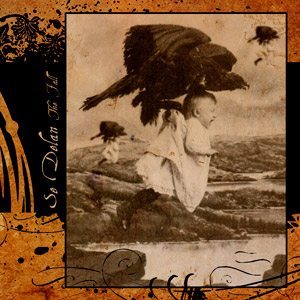 The Fall is the debut offering from Se Delan, ostensibly a duo of Justin Greaves (of Crippled Black Phoenix/Iron Monkey) and Swede Belinda Kordic (who previously recorded under the moniker Killing Mood). Perhaps the most astonishing thing here is that Greaves has found time to work on a project unrelated to Crippled Black Phoenix given that band's formidable creative momentum - they've recorded no less than seven albums in barely ten years.

Greaves and Kordic seem to have arrived at an almost telepathic understanding, and The Fall appears to have taken shape rather quickly. The album is also markedly distinct from Greaves' other work, this new writing partnership providing an intriguing glimpse into a side of his music that listeners have only dimly glimpsed in Crippled Black Phoenix.

The albums opens with an instrumental piece entitled simply 'Intro', which sets out Se Delan's stall with style. It is built around a plangent repeating riff and echoing, barren interludes where Kordic's wordless vocals swirl around like an icy wind around a long -deserted town. Funereal piano plays the piece out, and even at this early stage, the album has already managed to generate a creeping sense of unease, isolation and loss.

This feeling of disconnection is something the album delivers consistently, and potently. Whilst instrumentally it's not "heavy" in the traditional sense, its mordant, leaden sense of entropy lends it an oppressive feel. Don't be fooled by the predominance of acoustic instrumentation or the spacey, loose arrangements: this is a demanding listen, an album that makes time slow to a crawl and which casts a
powerful spell. It's not a record you'll find yourself sticking on in the background; it's a captivating, deeply emotive record that will grab you by the lapels and force you to pay attention.

There's a strong sense of a specific style being created before your ears, something which can probably be best described as a sort of post-apocalyptic Americana-influenced gothic blues. Many of the songs are built on sturdy repeating patterns, cyclical riffs that suggest the likes of Led Zeppelin's reading of the folk standard 'Gallows Pole'. The effect is utterly hypnotic, and magnified by the eerie quality of Kordic's vocals which are frequently close-miked and drenched in reverb, the keening of forlorn ghosts on the edge of hearing. When Kordic's vocals are given more space - as on the haunting 'Beneath The
Sea', built on a metronomic drumbeat and banjo riff - there's a bleakly confessional quality to them that bypasses your thought processes altogether and proceeds to directly raise your neck hair.

Fans of Greaves' previous work in Iron Monkey and Crippled Black Phoenix needn't be unduly concerned, however - it's not all gloomy introspection. Frequently the songs build to a Mogwai-esque post-rock climax, the storm clouds gathering to generate thunderous finales. The clearest example of this is probably 'Dirge', the track that was lifted from the album as a promotional 'single'. Twin Peaks-esque guitar, drenched in reverb, is accompanied by thudding drums and Kordic's spooky siren-song vocal. The whole slowly, oh so slowly, builds in intensity before delivering an apocalyptic coda, the song finally petering out, as if the musicians are utterly spent. The listener certainly is.

More than any of the other tracks here, 'Dirge' is possibly the perfect distillation of the embryonic Se Delan sound. 'The Hunt' also delivers a dose of unrestrained power, its firmament-splitting drums and cavernous riffing, undercut with sinister sound-bites, verge on the chaotic and the track manages to be genuinely disconcerting.

There's plenty of other drama to be heard here. Other highlights include 'Little One', where icy piano and an almost whispered childlike vocal combine to cast an eerie spell, a ghostly choir hovering in the mists of the song to deliver the coup de grace. 'Today' comes on like a cross between Lykke Li & Mazzy Star, with a lilting but dramatic guitar riff. Closest to a 'single' is the deceptively dark 'Tonight', which, with its huge guitar riff and disconcertingly seductive vocal, is strident enough to immediately enter your subconscious. It even manages to include a tortured guitar solo, a rarity on this album, before closing with a chilly haunted house organ refrain that will freeze the blood in your veins. It's the sort of thing Twin Peaks fans might expect to hear played on-stage at the Roadhouse, the sound of love and desire conjured as demons to run from, rather than angels to run towards. "A dream is a dream / But not tonight", croons Kordic, in a way guaranteed to give listeners restless nights.

The final two tracks deliver yet more rich atmospherics. The sparse guitar that opens 'On My Way' is accompanied by wolf-like howls before giving way to brash verses, interspersed with sparse rootsy guitar, an object lesson in dynamics. This is all topped off by a beautifully realised climactic solo and a spectral ending, Greaves' guitar lost in the fog as the wolves circle the camp fires. The closing 'Lost Never Found' takes a rather different track, substituting quiet menace comprised of spooky piano and a heavily reverbed vocal, like a funereal Goldfrapp. Greaves' guitar once again provides a fulcrum for the band to build momentum upon, and the song climaxes like frozen waves crashing onto bleak sands, a simple plaintive piano motif closing out the record.

Whilst it's undeniable that the components of Se Delan's music are in some ways well-worn musical tropes of their own - Mazzy Star, the shoegaze of early Lush and Slowdive, the spooky 50s dancehall of Angelo Badalementi's Twin Peaks soundtrack work and the ghostly Americana of bands like Wilco are all fairly obvious touchstones - the evident love of the band's various influences, and the thoughtful and deeply effective way in which they are all combined make Se Delan's debut a real treat for the ears, a deeply felt and hugely atmospheric record that speaks of greater triumphs ahead.