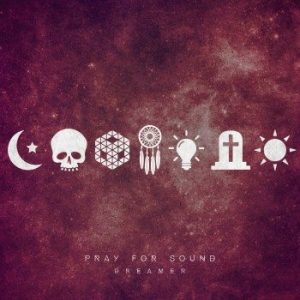 I discovered Pray For Sound when, surfing the net, I accidentally landed on ‘Tympanoplasty’ from the album Monophonic and I started diving into a world of pure cinematic post-rock. At that time Pray For Sound was the solo project of Bruce Malley  from Boston, MA, an artist able to produce that kind of music that doesn't need words to describe his emotions.

Being very curious about both the band and the album names, I did some research and I found that Bruce Malley suffered very much with hearing loss, tinnitus and ear pain, rendering him partially deaf in the left ear after repeated surgeries. Bruce translated in music those emotional experiences that are all concentrated in Monophonic.Knowing that allowed me to even better dive into the artist music world and I've always kept an eye on him.

Hailing from the Boston area, in September of 2012, Joe Aylward, Chris LaRocque, Nick Stewart, and Steve Aliperta joined Bruce to become a band that delivers a music that sits comfortably in the post rock category, with occasional hints of metal.

Pray For Sound are now back with the debut full length album, Dreamer that will be released on July 9th, 2014 through the label Flesh and Bone Records. Dreamer is composed by seven songs and each one represents a different dream state expressed through melodic post rock - even  the brilliant  cover artwork expresses the same states and emotions through symbols.

The opening ‘Sleeper’ is music for the night you get served on a silver platter. The elegant execution of this track demonstrates that post-rock, when it’s done right, can make dreams for the daydreamer, give an escape for the escapist and bring new thoughts to the thinker. It’s a track that talks directly to your heart.

Everything change with ‘Decayer’ that kicks off with grandiose attacks-by crashing guitars with a pursuing rhythm that seems not leaving you till when, unexpectedly, it dissolves into a gentle melody that, again, moves and it’s a great mix of post rock and post metal elements. Soft and heavy, light and dark, this song has a great combo in it.

‘Sonder’ follows the same path of the previous track meanwhile the short title track works as an emotion packed interlude, as all dreams should be. ‘Conceiver’ has the typical post rock structure of soft-loud-soft segments and with ‘Mourner’, Bruce and his instrumental band, deliver a track full of charming melodies that will blow away the listener. Soft and lilting, it touches the listeners gently and quietly. I felt in love with ‘Day Bringer’ since the first time I heard it. This song and the ethereal echoing vocals that work as that additional instrument that gives more power to an already beautiful melody, showcases some of the band’s beautiful sound perfected throughout the years.

Dreamer is an album that will remain with you even when it’s finished thanks to its long-lasting effect. There’s a lot in it, from the gorgeous multi-chordal pads, spreading over barely recognizable major scales, the echoing vocals, layered, delayed, and then layered again. Here are the stunning waves of sounds created by the guitar riffs that explode before dissolving in a calm melody after the storm. Here is also the illusion of time: it’s easy to get lost in Pray For Sound’s atmosphere to find yourself wrapped in a thick blanket of sound, slowly drifting away into nothingness.

Dreamer, is coming to cassette tape in transparent blue and green swirl shells, limited to 50. Each package will include a tarot card set, digital download, U-card packaging and a sticker.