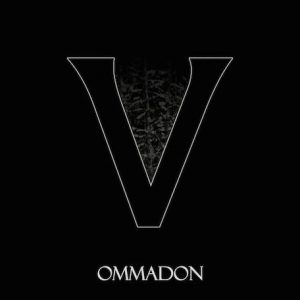 I had an unusual initial response to Ommadon’s newest album V. Whether I put it on in the car, on headphones while working, or on big speakers at home, I get the nagging feeling of wanting to stand back, to just get further away from it somehow. Yes, it’s monstrously heavy, and yes it’s extremely long, but that’s not quite why I feel the need to retreat; and it’s not because it’s something to try and get away from either. Instead it’s the sheer enormousness, the colossal scale that seems to defy assessment. Listening to the two 45-minute tracks on V is like trying to imagine your own burial under the Himalayas.

Setting out into the first track, for the opening minutes it feels like scrambling over random glacial boulders of thudding chords, too elemental to really connect up into a rhythm yet. But once you’ve settled in for a couple millennia, from a geological-era perspective you can start to appreciate the crumpling mountain ranges of riffs, the tectonic low feedback tension and the slow lava distortion. The riffs might not be quite as immediately “catchy” as some of Ommadon’s previous ironworked monoliths, but that again is partly due to the eyewatering vastness of the record, and with repeated listens the entire mountainous cycle can begin to be grasped.

At about 14 minutes in, and again at 27, the pace picks up a bit briefly: an iceberg crashing into the ocean, with ripples of force spreading out into the track even while the rhythm folds back ponderously under the waves. From the half-hour mark, there’s a nice reprisal of the riff but in a disfigured, half-melted and even slower form. In places the howling-ghost background fuzz gives out subdued hisses and shrieks, like noxious, threatening vapours shrouding the leaden gravity of the riffs. But picking out details and moments seems a bit inappropriate in attempting to describe them in separation from the dense and impenetrable lump of dark mass that is the entire record. Even though at times it feels difficult to get a grip on the whole of the riff, and despite a pretty single-minded commitment to the sludgy distortion and not much else, there’s more than enough change, differentiation and all-out space-time-crushing heaviness here to keep dragging you (and various other nearby galaxies) into the black hole.

In the second track the riff comes in, sluggish and fat, for a few minutes setting the scene for developing rhythms around it. But then the riff really comes in, smashing the expected boundaries of volume, an energising burst for the track which also keeps things poised for yet heavier blasts that could drop at any moment. Comparisons with SunnO))) will be inevitable due to the vast oppressive drone-doom weight, but here are no such avant-garde additions or cool collaborations to add quirks and variety... I hear Ommadon as closer to Monarch’s brutal and unforgiving morasses, yet even Monarch’s vocals offer another shade of ash grey that Ommadon refuse. The vast expanses of this record might deter many, but strange treasures are available for those willing to make the trek across its punishing volcanic landscapes.

For some reason this record hasn’t been made available yet on graven slabs of obsidian glass; however, it is the first Ommadon release to come out on vinyl, and it’s available to download here (with their four other albums- free downloads that I actually listen to regularly). See them live on their UK tour with Horse Latitudes and Coltsblood at the end of July.