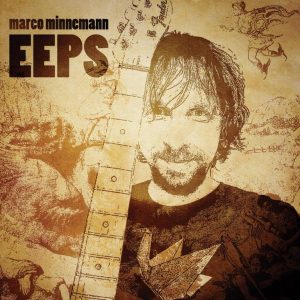 From the very beginning of EEPS, multi-instrumentalist Marco Minnemann lets us know we’re in for something a little different.  ‘Cheap as Fuck and Awesome as Hell’, showcases Minnemann’s too-good-to-be-true drumming ability, with occasional bursts of distorted guitar and synth (also played by Minnemann) before devolving into a short organ-only ditty.

In other areas, we’re treated with short pop songs (‘Oblivious’, ‘Sunshine’), lengthier prog epics (‘Sushi Cat Doll’) and …Marco sampling his own voice to utter the title of ‘Douche’ over and over again. Elsewhere, EEPS sinks its teeth into the heavy grooves we’ve come to expect from Minnemann’s drumming.

Experimentation is key for this album, as I touched on briefly in my interview with Marco. Tracks like ‘OC/DC’ and the informatively named ‘Right on Time and Out of Tune’ focus almost entirely on rhythm in lieu of melody, where Marco plays out of tune bass, keys and guitar. The closest similar idea I can think of is the Frank Zappa composition ‘Approximate’, in which each member of the band selected their own pitch to play the main motif in. This does not create the cacophony one would expect, as by being ‘right on time’ what we’re left with are interesting and unexpected sounds.

It’s not just this rather extreme level of experimentation that works on this album. Experimentations in texture are found in abundance, and provide for a rather unique listening experience. The titular track combines metal riffage with jovial, almost juvenile keyboards and hand-clapping, always skirting around the groove you’d expect from such low-tuned guitars. ‘Soul Dance’, on the other hand, gives us the heavy drumming we’d expect in a metal track and juxtaposes that with acoustic strumming.

This all comes to a head with the lengthy centrepiece ‘Sushi Cat Doll’, featuring excellent interplay between all of the instruments and a stellar guitar solo – it really does reveal how great a musician Marco Minnemann is, and hopefully will put any considerations of him being just a good drummer aside. The track alternates between heavy grooves and ethereal quiet sections, before combining them together for a finale that is both parts intense and subdued.

With this level of experimentation, it’s going to be hard to please everyone. Both ‘Dead Ghost’ and the aforementioned ‘Douche’ start out incredibly cheesily, but they completely redeem themselves by the end. Similarly, some of the poppier tracks didn’t work for me, but they act as an excellent palate cleanser after some of the more intense works, and I certainly appreciated their placement.

So yes, I keep saying EEPS is experimental, but so would be playing one single note for 14 hours straight. Through its subversion of song structures, its contrasting textures and general inventiveness, EEPS manages to attain the highest compliment I can give an album – to be experimental and fun to listen to.