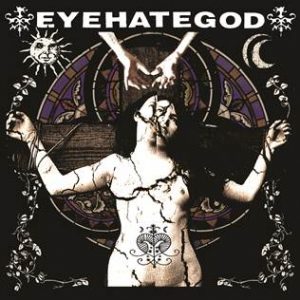 “The return of a fraction of the output signal from an amplifier, microphone, or other device to the input of the same device; sound distortion produced by this.

Or: The process of returning part of the output of a circuit, system, or device to the input, either to oppose the input (negative feedback) or to aid the input (positive feedback).”

Eyehategod delivering a fracking sublime slice of blues drenched, NOLA inspired sludge metal. It’s hard to believe it’s been 14 years since their last album, as it's been a long road for these boys since 1989. What started as a side project for all involved (and a way to get a trip to Europe) has now lasted over 25 years, spawned many imitators and clearly defined heavy music from that corner of the globe. And they should be damn proud. It's been a loooong time coming. And before I go any further I'd like to take a moment and raise a glass of the good stuff to Joey LaCaze, who sadly passed away last year. This is his last work, and an excellent epitaph. Well done mate, and thanks for all the hard hits. For anyone wanting to donate money to help out his daughter Lilith, go here.

Now – the music. There’s ample detuned guitars, solid, powerful drumming, brick walls of feedback and harsh, screamed vocals. Just as you want an Eyehategod release to be. I put this on and instantly was transported back 10 years, thrust into a seedy dive bar with bikers playing pool in between fights and the boys wailing around on a stage. Great.

The album opens with ‘Agitation! Propaganda!’, a sub two and a half minute slice of angry feedback and vocals reminiscent of early 80’s punk, with that unique NOLA edge. It’s barely there, shaking up your brain and making your foot tap before it’s gone with a wash of cymbals, leading into ‘Trying To Crack The Hard Dollar’. One of the strongest tracks for me, this has all the hallmarks of an Eyehategod classic – a veritable wall of atonal feedback kicks off the song, with Mike’s vocals verging on some sort of drunken demonic possession. It’s a simple riff, but Jimmy and Brian manage to take a single note riff, run it through what I assume is a keg of bourbon and look what comes out the other side. Great stuff. And that bass warble is wonderful.

‘Parish Motel Sickness’ blows past you in a blur, then we get to ‘Quitter’s Offensive’. Now THIS is a detuned riff. So fat and low, the guitars almost sound like basses, with Mike’s chorus vocals simply dripping resentment and venom throughout. Probably my favourite track on the album. ‘Nobody Told Me’ smashes through next, with more of that feedback, fuzz and blues to the fore. ‘Worthless Rescue’ is next, and a good example of where the difference in recording comes through – apparently about half of the album was recorded before they reconvened at Phil Anselmo’s studio with Stephen Berrigan producing. ‘Framed To The Wall’ is pure Black Flag mixed with a touch of Black Sabbath (and perhaps early NoFX?), Joey’s drumming all punk, no blues with his staccato snare shots.

‘Robitussin & Rejection’ is another standout, and you definitely get the feeling that this is autobiographical… And with these boys it would make perfect sense. There’s at least one criminal conviction per band member, and cough syrup seems to be a dainty breakfast tipple for these boys. This one is slow and sludgy, jerking and weaving its way through the track – in fact, exactly as I would imagine a cough syrup bender to be like!

‘Flags and Cities Bound’ is the closest thing to an ‘experimental’ track on this album, with spoken word sections bemoaning the inbred nature of some sections of the United States, extended slabs of feedback and a run time twice the length of any other track on the album. It’s good, and I don’t feel it drag, but it *maybe* didn’t need to go this long.

‘Medicine Noose’ is next, and reminds you all of a sudden that you haven’t heard a single major key riff all album until now – and it’s fleeting. It’s like they suddenly came over all ‘Kyuss’… but not for long. It’s great, and another strong track – this one got a lot of play in my house. ‘The Age Of Boot Camp’ finishes off this release with more (yes, more) feedback, chunky guitars and Mike really wailing away, like some kind of NOLA demon. It’s a solid finish to a good album.

So give this a spin – it might not get you straight away if you’re not familiar with their work, but it’s worth sticking with. And if you do know their work, then you’ve probably already heard it.

Did I mention there’s feedback?