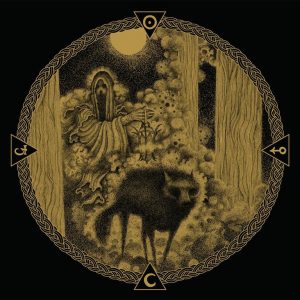 Out August 26th on

Bastard Sapling is self-heralded as being a black metal band that promises “no bullshit”. With Instinct is Forever, it is true that the music does not have traces of any unnecessarily strange cross-genre experimentation. Still, this is far and away from leather and bullet-belted Satanic fare. The expansiveness of the band’s sound makes it arguably the most exciting release within the genre so far this year.

Bastard Sapling is largely made up of members of Inter Arma, another band that refuses to fall into well-trodden territory within its chosen genre of sludge. That band's most recent release, last year’s Sky Burial, was an album that could only so tenuously be called sludge. The band blurred their heavy sound into a potent, psychedelic blend of styles. Bastard Sapling’s music is easier to place, at least on a surface level. The tracks here tend to stay grounded within the parameters of epic, melodic black metal. The execution, however, is that of a decisive crew of musicians that are able to build musical ideas into long-form journeys through everything from chiming folk to the bone crunch of old school viking anthems in a vein that easily echoes hallowed champions of the genre such as Immortal.

As far as hero-worship, this album makes very smart moves to avoid mining the past for stale material. The track ‘Lantern At the End of Time’, for example, launches through a triumphant gallop and rich, clean vocal harmonies into something much uglier. All the while, through its sprawling ten minute runtime, the song maintains an air of the sublime even at its most thrashing. The feeling of movement is imbued throughout the album so that by its end you feel as if you have actually gone somewhere within the music. These are the evocative elements that stand out in a wash of bands that all too often are happy to turn a cross upside down, play some arpeggios over blast beats, and call it a day.

It is difficult, however, to fully pinpoint what makes the music here sound so fresh. At times, it does not necessarily sound like anything earth-shatteringly new. Many bands, Krallice and Aosoth come to mind immediately, have created similarly multi-tiered testaments to propulsive, highly-melodic black metal suites. Even those two acts are often refining style rather than redefining it. Again it comes back to execution. No one has arranged a more muscular or appealing grouping of songs within this style in a long time. There is such a strong core of songwriting and musicianship as to make the pleasantly familiar vibe of a defiled requiem sound vital and boldly contemporary. The band does more than fuse separate parts into a cohesive whole, they create their own dialect of black metal wherein the syllables are familiar but the overall construction is something entirely its own.