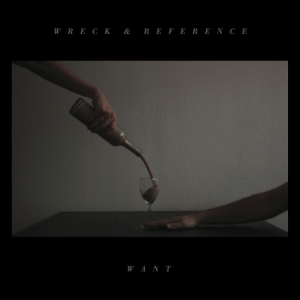 It is difficult to talk about music sometimes outside of hyper-eclectic cliques made up of various internet blog heads. The constant streaming, new tracks and artists every day via countless new digital venues, creates an atmosphere that is easy to get lost in. Trends flare up and disappear, sub-genres are birthed out of nothing and quickly forgotten. There are boards on the windows of witch house, and blackgaze and  chillwave are being criticized by the very bands that created them. If it sounds like I’m describing some sort of internet hype-driven dystopia, I should point out that this constant flux of new sound is what makes the music that lasts so exciting these days. At a more accelerated rate than ever before, artists are blending styles and trends in ways that transcend any ability to pin down where any of it came from or where it’s going. Music has come to resemble an electron cloud, with no single trajectory able to be mapped effectively. This is the world in which Wreck and Reference excels, demonstrating with their album Want that conversations about what metal is or isn’t are becoming completely obsolete.

There are elements of metal throughout the album, most notably the rending screech of Felix Skinner’s vocals. Through the digital skittering and chitter of album opener, ‘Corpse Museum’, it is easy to feel an understanding for the band’s aesthetic. Electronic, synthesized grinding against agile, weighty drumming, with a pained howl throughout. The ear tends toward the familiar in its attempt to categorize. Industrial, sure, there are elements of that in the strange power-tool synth sounds. There is also something between hardcore and noise-rock in the vocals. These elements picked apart, however, complicate what is really going on in the music. There are so many incongruous sounds and influences working together toward something new that it becomes useless to try and pin it all down.

Too often, listeners self-appoint the staggering task of quantifying and organizing conflicting sounds. This leads to linguistically useless non-categories, tossing countless bands into the pit of being labeled “noise” or the even more ubiquitous “post-metal”. It might give you a very basic intellectual idea of the music in Want, you will expect a mix of styles and moods throughout, but the actual emotional impact of a track like ‘Stranger, Fill This Hole in Me’ is something much more intangible. The melancholy that pervades throughout the album is used as a melodic lead-in from the ticking geiger-counter of the song’s first half into a skittering drum break that opens the gate for a blast of everything from theatrical goth pomp to pummeling art rock catharsis. And yet if you look through that sentence, you see how many adjectives are needed to try to convey what this band is doing.

The problem is that people can’t listen to everything. People are criticized for not giving certain artists “enough of a chance”, and it is difficult to parse through what leaves an immediate impression and what might need more focus and time than we usually have. The need for describing music clearly has never been greater in terms of recommending music or even discussing it so that good music can find its different audiences. And yet this comes with the implicit understanding that the experience of discussing music, a favorite pastime of many, does not even come close to the experience of listening to music. We reach for words to try and catch the essence of these bands that seem to pass by so quickly and almost always fail.

So the challenge is this: how do we reward bands that seem to have learned what so many of us have not about music's lack of boundaries? Wreck and Reference are a band that should be discussed - often and by many. What words, then, do we use? The most basic idea to take away is that Want is an album brimming over with melody, dissonance, impact, and subtlety. It is an album that is many things at once and is therefore a complete puzzle for bringing up among fellow music obsessives. The best advice I have is this: absolutely buy this album, then take it to a friend. They will ask you “what does it sound like?” You might try to tell your friend that it touches on everything from Xiu Xiu to Prurient to Godflesh to Suicide, and as you trail off listing bands you will catch yourself and realize the best way to communicate the power behind this album. Just play it for them.