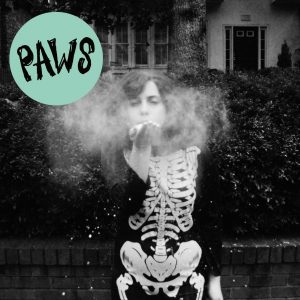 PAWS’ 2012 debut Cokefloat! was a complete surprise. Coming off the buzzing shock waves of several shows at SXSW in 2013, the band clinched it for me with their blend of syrup-sweet melodies and a lyrical vulnerability that is sadly too infrequently present on many contemporary bands.

With this year’s arrival of follow-up Youth Culture Forever, it seems that band in some ways has given audiences more of the same along with something intangible that makes it all just sound a little bit better. Is that too simple a word? Complete, cohesive, I could get my dictionary out but the main takeaway here is that this album sounds like a band that is exponentially more confident and well aware of their strengths, of which there are many.

One of those strengths is the utter crunchiness of the guitars, the band does not often let up on the intimate, over-driven sound of power pop by way of fuzz pedal that offers an up-close listen to something that is immediate so as to allow for clarity in the consistently excellent vocal melodies and lyrics that read like open notebook soul-baring.

A song like early album standout ‘Someone New’ does not have roots in complex poetic tradition with lines like “My heart is not a fucking toy that breaks whenever I see you with someone new,” but that was one of the strengths of the band’s debut that has thankfully carried over. PAWS is a band that cuts directly into the heart of the matter with very little pomp, something refreshing when stacked up alongside a lot of bands that are so often concerned with esoteric concepts and obtuse, layered imagery. That approach can definitely be exciting at times, but sometimes a band needs to sound like they understand how things work on the planet Earth. There needs to be more bands that understand that the world has its share of heartache for everyone and it’s ok to forgo the poetry and just say, “It sucks.”

While Cokefloat! had a sort of juvenile gleam to it, though, Youth Culture Forever is more forward-thinking. Vocalist/guitarist Phillip Taylor still drops a healthy amount of F-bombs throughout their follow-up, further paring away any notion of pretension or artifice from the band’s stalwart approach to vulnerability that manages to also feel muscular. Many people often mistake frequent swearing as immature when it comes to lyrics, but when you consider how far advanced the band’s sound is surrounding these blunt lyrics it is clear that the band is pushing themselves far beyond their debut recordings.

Album closer ‘War Cry,’ for example, subverts almost the entire album that precedes it. Starting as a lonely guitar line with a simple, tape-hissing vocal, the song begins to slam into slamming, churning post-rock in its most caveman form. Taylor lets out a heartblood-spilling scream as the band completely goes off script into an extended cosmic jam. It is a completely exhilarating moment that soars beyond the otherwise tightly constructed pop gems leading into it.

These left turns the band takes showcase their willingness to expand on their sound past simply being a fuzzed-out power pop trio (I am avoiding using “pop-punk” because I think it’s a mistake to call them that). The band, whose strengths seemed so firmly in place on their debut, has found new ones that hopefully point toward longevity in their career. It’s a bold move toward the future of a band that demands greater attention moving forward.