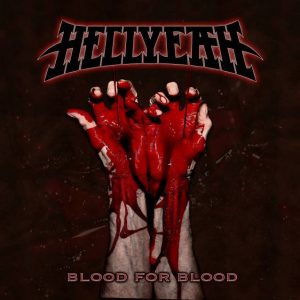 According to the HELLYEAH promo and website they ask you to forget the guys' past bands and notoriety and just take the band for what is. Fair enough so I won’t write anything with regards to this. Chances are if you like this kinda stuff/genre then you will already know the history of the band.

So on to the good stuff, and I do mean good. With the Blood for Blood album HELLYEAH have “probably delivered the album that they would have wanted to record the first time around” stated Vinny Paul, but probably steered away from it as to avoid being compared to their previous bands.

For me this album blends together perfectly what each of the guys are renowned for, Vinnie Paul’s tight ass groove filled drums, locked into the heavy ass bass lines of Kyle Sanders and the rip your balls off power riffs and grooves played by Tom Maxwell on the guitar. Add into this heady mix vocals from Chad Gray and I gotta say that this is a great heavy album that when listened to at volume gets the room, in fact, the whole building shaking to the beats. It’s probably back to what the guys are better known for which takes the album into a darker more serious place in terms of both musical style and lyrical content as the few tunes I have heard previously from HELLYEAH have been more party anthems. But that’s not to say there are no anthems on Blood for Blood.

Onto the tracks then. 'Sangre Por Sangre (Blood For Blood)' is a perfect opener for the album and a great indicater of what is to come. I checked out the video for this song as well and it is a cracker. 'Demons In The Dirt' and 'Soul Killer', tracks 2 and 3, don’t let up one bit and continue in the same vein. Track 4 'Moth' for me is the stand out tune as it has an amazing hook and chorus. 'Cross To Bier (Cradle Of Bones)' and 'DMF' are the next tracks and again doesn’t fail to deliver on power and melody. The last 3 tracks 'Hush', 'Say When' and 'Black December' all live up to the high standard and overall tone of the album. I hope and have no doubt that this album will go down extremely well in all quarters as HELLYEAH have delivered a really fresh and relative album and will give the sometimes more groomed younger acts who use the “paint by metal” techniques a much needed kicking to understand that the music in all cases needs to come before the image duh!!