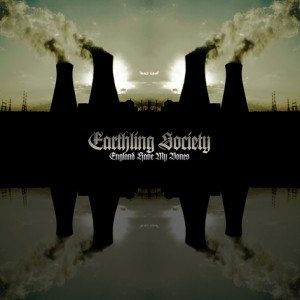 Fleetwood may not be known for it's rock and roll heritage apart from forming one half of a uber famous rock band but little did we know that bubbling under the surface was a vibrant underground scene and one of the fruits of that are Earthling Society.

Having garnered acclaim from none other than out there psychonaut Julian Cope, Earthing Society have been ploughing away through numerous line up changes searching for that perfect sound. Casting their lot into a heavy psych/jazz crowd, England Have My Bones is the new release from the band and sets it's stall out as a sprawling meisterwork that aims to reach parts other albums don't reach.

So far, so psych and what you do get is one hell of a dense psychedelic work that takes repeated listens to truly appreciate the full effect of what Earthling Society are trying to do. It's not perfect and it does meander in parts but when it hits that psych bone, oh my you better watch out.

Consisting of four songs, 'Aiwass' is the first and throughout its eleven minutes serves as a swirling, dense, psychedelic introduction to the album. Almost impenetrable in parts, it creates a vortex of sound which builds...and builds...and builds. Typically psych and space rock, the clarity of the musicianship is excellent and keeps things interesting.

'Tortuga' takes things down a pace and is the only song here with vocals on it. It's probably the most accessible too and the submerged lyrics help drive the song to its conclusion. It's a slight psych masterpiece which can sit along bands such as Lucid Dream and The Oscillation for it's take on a sub-Spiritualized level.

Brilliant as this is, nothing quite prepares you for the cover of Alice Coltrane's 'Journey Into Satchidananda' which out grows its jazz roots and take on a full on space rock experience. Firmly rooted in the bass and drum section which at times threatens to turn tribal, it's yet another dense piece and turns the original on it's head. It's a weird situation where free form jazz gets grounded in basic instrumentation but sounds even more out there.

It all rests on the title track to see us out and after all the extreme psych it's time for a come down tune and this does the trick with it's slight guitar leading us slowly back down to earth. It may sound a bot trite but it does work and it's only after the album finishes that you start thinking about what you have actually just listened to. It's the equivalent of a breather after an intense trip.

England Have My Bones is an intense piece of work and can stand tall amongst the current psych scene for trying something different. It's intense and very dense but give it time and it reveals myriad possibilities in the music. There is a strong jazz ethic throughout which leads to some rather interesting excursions and it is this that should set them apart from other deep psych acts.