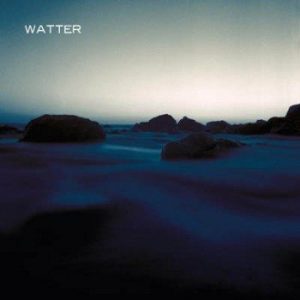 After the release of the début album by Inventions, the new post-rock super duo formed by Eluvium with Explosions in the Sky's Mark T. Smith, now the label is going to release another  long awaited record.

Fans of post rock, prog rock and, more importantly, of amazing instrumental music will be delighted with This World, the album that signs the début of Watter, a super trio composed by Britt Walford of Slint, Zak Riles of Grails and the multi-instrumentalist Tyler Trotter.

A great party requires a special guest and it so happened that Tony Levin, longtime bassist of the legendary progressive rock band King Crimson, joined the team and together these genius created an album that is absolutely amazing. Other guests on the album include Walford’s fellow post-rock veterans Rachel Grimes of Rachel’s and Todd Cook of The For Carnation and Shipping News.

When I read about this project I was obviously  excited and when I finally had the chance to listen to it I got lost in it. This World lures you in, and then you know you cant get away, it's beauty in plainness .... it fools you.

This World is an album which, from the opening 'Rustic Fog', draws you into a world made of burnt guitar, swelling atmosphere and strange vibes.

The album opens up with the  seven-minute 'Rustic Fog' and you are immediately transported in an amazingly addictive dimension. ‘Rustic Fog’ is like complexity in simplicity, the rhythm is pursuing and the execution is brilliant. The sound becomes darker and deeper towards the end and it conquers you. The opening track is the mermaid that leads you into the Watter's world and leaving it is quiet impossible. Watter know how to write a grandiose introduction!

With the following ballad 'Lord I Want More' we slowly slide into a mesmerizing melody that soothes and caresses you till landing to the immensely strong 'Small Business', the wonderful section featuring Levin on bass alongside Walford, Riles, Trotter, and guest vocalist Dane Waters. 'Small Business' starts off gently and rises and falls through a progression of various themes, sometimes featuring quiet sections of stuttering instrumentation but mostly flowing along with lush keyboards dominating the sound. There is a wonderfully tense build-up around the first five minutes before the band unchain heavy riffs and, as it happens in the best prog songs, they achieve the peak and then they continue going to the complete opposite way. The instrumental section at about the eight minute is notable and marks the moment where rhythm changes toward funk, cinematic riffs. 'Small Business' is magnificent.

‘Seawater’ is one of the most sublime moments of the album. The bass is very prominent, not only in this section but also really throughout the album.

Clocking in at 40 minutes, the title track really showcases the bands ability to write a solid, memorable melody. ‘This World’ is a beautiful ballad with an awesome guitar and an amazing piano. This track is a must for each music lover and one of the best music journeys you could ever experience .

After approximately 50 minutes, one can appreciate the masterpiece that is This World. It’s all there: the long songs, the short songs, the instrumental sections, and the repeating melodic themes. Yet it all sounds as fresh and vital as ever, taking us on a musical journey that only this super group can do.