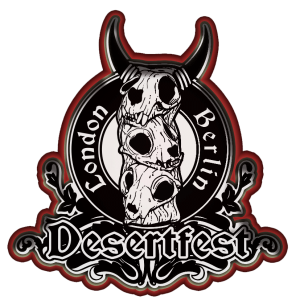 So Desertfest happened again.  If you are unfamiliar with this ridiculous event,  it is basically every riff loving nutter on the planet descending upon Camden to break their skull in a variety of ways for three whole fun filled days.  Absolutely cracking line up this year as ever.  Here’s what went down.

Monkey3- This was one of the main attractions for me.  I’ve been listening to these four Swiss chaps for years but they seemingly never play the UK so I was a little disappointed to find out I would be peaking so soon.  Anyway, all minor complaints like that were quickly blasted away upon launch as they were absolutely off the scale.  They delivered spacey jams, too amazing for a mortal like me to begin to comprehend, and blew me away harder than I have ever been blown before.  Ultimate start!

Necro Deathmort – The Black Heart was more rammed than I have ever witnessed, making the temperature roughly around 83,000 °C.  Electric doom duo Necro Deathmort decided not to take any prisoners though, smashing out one of the heaviest and darkest set I have seen them do and it was gruelling (in a fucking good way)!  I’ve never had so much fun whilst fighting for my life before.  Top notch!

Sixty Watt Shaman – I used to listen to this band when I was seventeen, and, as they have not toured in about fifteen years, I was keen to check them out.  They play decent enough southern style stoner rock like Alabama Thunder Pussy – it was pretty heavy and they were enthusiastic but can’t really hold a candle to some of the boundary pushing music that’s happening in the scene in 2014.

The Ultra Electric Mega Galactic – I was pretty hammered by then, to the point where I didn’t even recognise Ed Mundell.  I have so many memories of him being this striking blonde bombshell in his Monster Magnet days.  He looks older and wider now, like the rock star life style may have caught up with him.  However, he certainly can smash out a riff and some amazing lead guitar.  They pumped out a very enjoyable, fun little set with some of the most ridiculous lead guitar you’ll ever witness.  Not too heavy or challenging, just what we all needed at that time of day.  I think they played an Atomic Bitchwax track too – sweet.

Horisont – The Black Heart as busy and boiling as when Necro Deathmort played.  I think I liked what I saw, but unfortunately needed to leave after about ten minutes because I thought I might actually die.

Spirit Caravan – Meh, I don’t want to sound like a complete heathen but I always find some of the founders of the scene quite boring.  They are obviously great musicians, but in all, a bit bog standard stoner rock for me really.  Not my cup of tea (or can of K cider) but the place was packed out and some of their fans seemed more than transfixed and delighted. 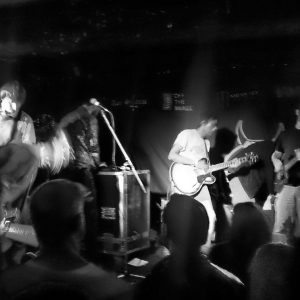 Slabdragger – The Underworld was more packed than I saw it for the entire weekend, which is mental considering they were on first and they play London all the time.  Rammed with good reason though – absolutely ridiculous riffs ranging from spacey jams to filthy death metal.  They really looked like they were enjoying the shit out of it too.  Huge entertainment backed up with sheer power.  KABLAAM!

Arabrot – The Norwegians took to the stage with a completely new line up to what I have seen before including a rather crazy looking lady in a hospital robe or something.  Just wow… it was nuts.  Loud as tits and brutally maxed out, whilst ploughing through seething noise rock which almost sounded like a darker and pissed off version of The Melvins.  Mainly new material but was a nicely balanced set with real variation.  This was certainly the best I have ever seen them, finishing with the crazy lady walking around the stage screaming which, consequently, made me want to go home, hide in a cupboard and stroke my cat until it all blew over.

Hey Colossus – These seven chaps don’t look like a Desertfest band.  In fact, they barely even look like a band.  However, what they lack in aesthetics they make up for in pure awesome.  They opened with ‘Hot Grave’, which was unreal, and then took us on an incredible trip whilst sounding unlike anyone else at the festival, or the world at large for that matter.  Lots of wonderful electronic noises floating in the background of some jaw dropping riffs whilst the vocalist kept looking increasingly menacing, saliva dripping off his face.  One thing is clear, Hey Colossus are a ‘don’t give a fuck’ juggernaut rock music machine which will never be stopped by anyone or anything.

11 PARANOIAS – Ahh perfect, one of Mike from Bong’s bands who make a right horrible racket.  Mike stood with his back to the crowd as they assaulted everyone with rather maxed out riffs.  The vocals were pretty snarly and disgusting, whilst the guitars basically threw brutal riffs at us.  That said, there was the occasional respite when it got a little spacey.  Incredible drumming too.  HUGE!

Weedeater – They hardly ever play the UK so no surprises that the ballroom was utterly rammed for these chaps.  Good job too, because they created an intensely special moment for us all.  The drummer was positioned down the front so we could all enjoy the hugely entertaining, hurricane of thing that he is.  All this with far out weedy visuals happening in the background.  Wino even came on for a jam and delivered a flawless Lynyrd Skynyrd cover.  It was impossible not to just stand there and smile (and maybe even shed the odd tear). 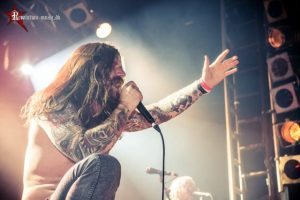 Kvelertak – I love Kvelertak.  The most enthusiastic band ever simply smashing out their stupidly fun tunes, whilst a circle pit the size of Wales caused utter destruction.  Not an unpumped fist in the house.  What is better than a heavily tattooed man with a beer belly standing there bare topped with an owl for a head?  Nothing, that’s what.

The Cosmic Dead – I’ve seen this band four times in the last year but by god I was not expecting this.  They absolutely tore the Black Heart a new one with a sonic onslaught of pure exhilaration.  The crowd went bat shit mental, resulting with someone landing on my face and blood pouring down my nose.  I was left holding my coat, nursing the wound with one hand and a pumping fist of the other.  The band literally just floated around the crowd or the last few minutes.  In the meantime, we were all left to piece together what life was like before we witnessed this stunning performance. 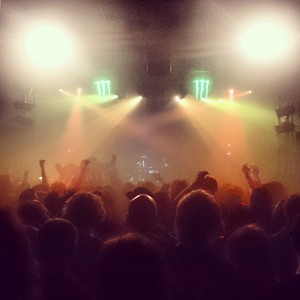 Pombagira – I’m not sure if it was too early in the day but I could not get into this two piece doom band.  I found their last album a little unfocussed, and found the live performance to be much the same.  I feel that all doom should be powerful, like it’s being played through a storm on the side of the mountain.  This wasn’t.

Grime – This Italian doom power house were fierce.  A cosmic smattering of relentless riff combos which made my brain curdle and my face cry.

Radio Moscow – Yes this was great.  Three chaps seemingly beamed in from the seventies to entertain us with their fantastic retro rock'n'roll jams.  The bassist could not have looked any more cool.  Whilst all the delightful little riffs bounced around the room  we all just stood there catching them like psychedelic butterflies.

Eagle Twin – Really quirky doom backed up by some of the most ferocious jams I have heard all year.  A truly unique performance, and a great example of a band taking it to the next level in 2014.  That’s exactly what all this is about!!!

Church of Misery – Wow, these guys were monstrous.  A total slice of annihilation – loud, crushing, hair everywhere.  The crowd could barely cope and went berserk.  Church of Misery are heavyweight legends, and I'm not sure if I’ll ever recover. 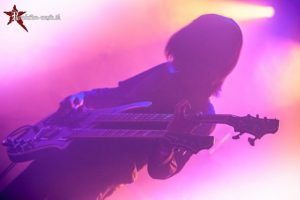 Boris – Amazing.  The drummer was concealed for large part of the set through the smoke, but when he finally emerged with that huge Japanese gong it was one of the best moments ever.  They did everything, from the most hypnotic doom jams to the most beautiful of post rock.  It got stupidly loud right at the end – I think they stole every amp at Desertfest just maxed them out, demoting me from a tired moron to a twitching corpse.  Perfect end to the perfect weekend.  See ya next year!