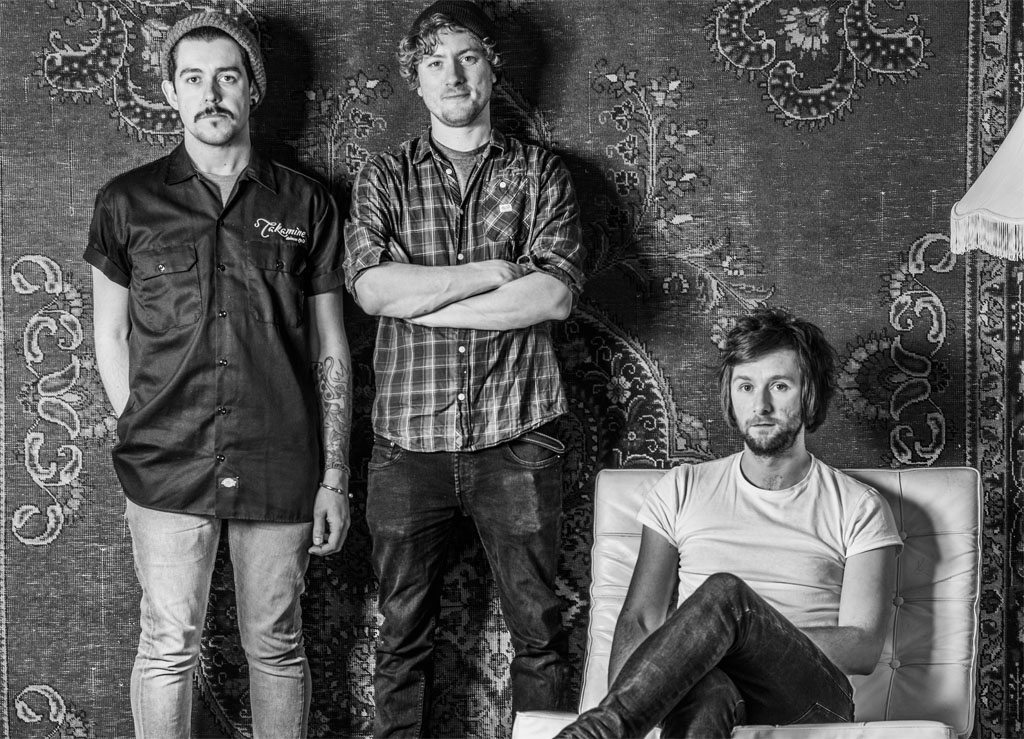 Polymath recently blew our tiny minds at the amazing Strangeforms festival in Leeds, and have just played a handful of dates around the UK. Bassist Yoseph Leigh Branton had a chat with us about what’s in store for the future.

(((o))): First of all, thanks for taking the time to talk with us! First and foremost, how about an introduction to the as-yet uninitiated and unaware?

Yoseph: Ok, we are an instrumental, 3 piece, Prog-Math band from Brighton. We've been around for a bit less than 2 years, and we started life as a side project for Monsters Build Mean Robots and Last Days of Lorca founding member, Tim Laulik-Walters.

Yoseph: 2014 has been great. We've spent as much of it as possible playing shows. We've done a few mini-tours around the Midlands and the North, as well as a few shows closer to home. We've been really lucky to play with some great bands this year; recently we shared the stage with Mutiny on the Bounty on a couple of occasions, which was a fantastic experience. We've also been playing with Cleft, Shrine, Lost in the Riots, Vasa, Quadrilles, and loads of other great bands, so it's all been pretty full on. It's always great to play with bands who inspire you, and push you to play better, faster and create weirder effects.

(((o))): I can imagine you guys having a huge whiteboard in a studio somewhere with impossible equations of time changes and rhythmic shifts that you somehow put together to create these chaotic, yet thoroughly formulated soundscapes. How do you go about the songwriting process?

Yoseph: I wish we did have a white board, we should definitely get one! Our song writing process tends to be quite rhythmically based, both Tim our guitarist and Chrispy are drummers, so we tend to think in rhythms first and build everything else around that. Tim will usually bring us a rough idea for a progression, we'll learn it, build it, and then go back through it messing up time signatures and making it all a little weirder.

(((o))): With being able to record as many layers as you want within a studio, how is that then transformed when performing the song live? I did notice a hell of a lot of guitar pedals at the Strangeforms festival you guys played recently!

Yoseph: Studios will always give three pieces a freedom that we can't replicate live, that said there are very few layers on any of our recordings to date, more sugar icing than additional parts. Live we use between 3 and 4 separate looper pedals, mainly used for doubling up guitars here and there. As far as the rest of the pedals go, I don't think we're any especial exception on the Math circuit, Cleft, Mutiny on the Bounty and ASIWYFA are good examples; it's a pretty effects crazy genre, everyone has a two man lift pedal board. Every guitarist is constantly trying to make their guitar sound nothing like a guitar.

(((o))): Speaking of which, how was Strangeforms for you guys? For us, that has to be one of the best line ups we've witnessed in quite some time!

Yoseph: We agree, it was a great festival. Bad Owl did an incredible job of organising and promoting, and the venue was perfect for it. It had such a great DIY feel to the whole event. None of the bands were rushed in between sets, no-one played to an empty room, all the bands were brilliant. We can't wait for next year.

(((o))): So there's 'Vertex', 'Tetragon' and 'El Castillo' available as free downloads on your Bandcamp along with EP La Unión De Roku & Demipenteract. Do you have any plans to record/release anything else in the future?

Yoseph: We do indeed. In fact, we're very excited to be heading to the studio with And So I Watch You From Afar engineer, Lee McMahon to record our first full length EP. We're even planning on putting it out on Record. We're currently crowd funding the project through Kickstarter, which is going very well. We've come up with loads of rewards for supporting us in funding the record, and it's a great opportunity to pre-order the record. We're planning to have everything finished and released by September, but we might even put out a couple more freebies in the meantime.

(((o))): Here's a little something I like to throw into the mix, for nothing but shits and giggles really: I'll ask a question in the form of a lyric - idenitfy it if you can, and answer in another random lyric. "Can you tell a green field from a cold steel rail?"

Yoseph: The lyric is Pink Floyd, 'Wish You Were Here'.

Response: "The gardener plants an evergreen, whilst trampling on a flower"

(((o))): Apart from the upcoming album (good luck with the Kickstarter!), what else do you guys have planned for 2014?

Yoseph: More shows, more stuff. We're going to head over to Europe later in the year, and do a few shows with Mutiny on the Bounty. We'll try to play with 100 Onces when they're back over here as well. We might do a few more live sessions, maybe do a live release as well. We're focussing on the record right now, but when it's done, we'll be sure to pack the rest of our year full of shows and downloads and anything else we can fit in.