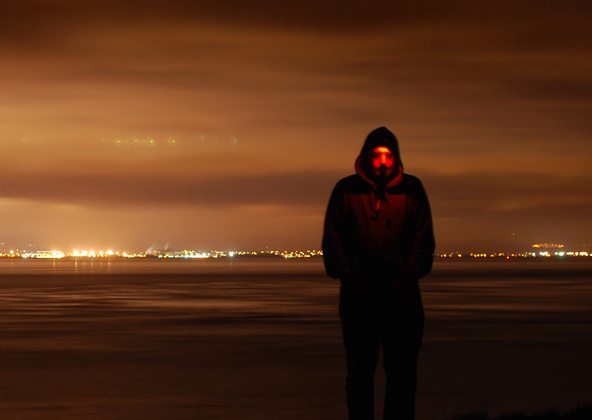 For a long time now, we've been big fans of  Tim Waterfield; both in his guise as head honcho of Field Records and as the one man post rock  machine that is Karhide. April saw the release of new EP 'Colossus' (reviewed here) - so we thought it was about time he sat down with us to discuss his music, and what's in store for the future.

(((O))): Thanks for talking to us. First off, can you tell us a bit about what Karhide is, how it
came about & how long you've been doing it?

Karhide started as my last band Ann Arbor came to an end around 2007 because I was planning to move to the US and I did not want to stop working on music. It was a really good learning period for me because I threw myself totally into recording and wrote all the tracks for the Acadia album while I was over there. It took me the whole 4 years to write and record the album and part of it was wanting to do something different to what has gone before. I’m still really happy with the album and even as I was finishing the mixing on it I
was having lots of ideas where I wanted to take the sound.


(((O))): Playing solo post rock is a pretty crazy brave thing to do. Are there ever times
when you wished you had other band members to hide behind?

There’s often times where I wish I had a full band to back me up when things go wrong or I arrive at a venue and I know the PA might not be quite right. A few weeks ago I played at the Cellar in Oxford and the laptop had a fit during the first song and I had to reboot so it put me on the back foot straight away. It’s only one of the few times I’ve had issues with the laptop but it always makes me think of how I can improve things and move forward to make it the best I can.

(((O))): Even on the unfinished mixes of Colossus I've heard the sound feels 'bigger' than
Rough Sleep, which in itself felt bigger than what had gone before. Is that something you're consciously aiming for or just a product of more experience / new equipment?

It’s odd you should say that because the tracks on this EP are older than most of the tracks on the last two EP’s and I’ve not really thought of them as bigger. I think of these tracks as the fast loud tracks for an album and they seemed to fit together to make the EP.


(((O))): On Colossus you've brought in Alex from Tacoma Narrows Bridge Disaster & the drums sound huge. Is this something you plan to do more?

I really like to be able to write tracks and then get a live drummer in because it adds something new to the tracks that I would not be able to program. I’m a control freak and technology has allowed me to create really cool things but I know when something needs a little something extra. I think there’s going to be more collaboration in the future and there’s people I’m talking to so that the tracks can be reworked for the album.


(((O))): You've been 'on the scene' for a long time now, how do you think things have changed over the last 10 years? And how, both as a musician and a label, has digital & online changed things for you?

Things have changed a lot and things are not as clear as they once were. At one time everyone wanted to be part of a label and now bands have to forge their own way through. But there are now some great tools for musicians and bands like Bandcamp and Soundcloud which would of been amazing when I was first starting out. I have always believed in DIY so the web has made it easier to get material out but now it seems like
there is a lot more bands which makes it harder to stand out.


(((O))): Colossus is yet another Karhide EP. Is there a reason you choose to release your music this way rather than save the tracks up for an album?

I think at the moment I have not been able to face working on a full album because of how much it will take out of me. Most of the tracks I’ve been releasing as EP’s were written by the end of 2012 and I was ready to start on the album in Jan 2013. Lots of things happened last year that meant I could not commit the time to work, the main one being that my Dad was diagnosed with terminal cancer at the start of the year but lost his battle in November and then I had to make sure my Mum was OK. I’m just about back into music and deciding on what my plans are for the future but I’ve also been thinking a lot about the past.


(((O))): Saying that, we've been having a lot of debate here recently as to whether there is indeed really still a distinction between an album & an EP in the digital age. What are your thoughts on that?

I would say that an EP is still a harder sell than an album because it does not always get the recognition that an album will. With Field I have released a number of EPs and they have always been harder to push and the press will often focus on albums. So I made the decision not to release any physical EPs again through Field because it’s so hard to make the money back.


(((O))): You've been at the helm of Field Records for over a decade now & seen many a post rock luminary pass through your doors. Who are you excited by at the moment & is there anyone we should be looking out for, Field and otherwise?

I’m really in to Killl Chaos which I released the album by at the end of last year after they were invited to go on tour with Jamie Lenman. They are just working on a new EP which should be ready in a couple of months. If you’ve not heard the new Jamie Lenman album you should check that out and if he plays near you go!

I’ve also been enjoy the new album by The Barnum Meserve which I think they are releasing later this year but I’m not sure on what label. Other bands I’ve enjoyed over the last couple of months are Signals from the Isle of Wight, Beat Easton from Southampton, AK/DK, 100 Onces, Tera Melos as well as the new album by Lesser Key.

New things that are coming up are finally a new album from Alright the Captain which should be with us this year along with a possible new Upcdownc album. I’m also excited to hear the new Rumour Cubes album when it’s finished because last time I saw them play they were really good!


(((O))): Is there one artist you really wish you'd worked with over the years but never quite
managed it?

I always wanted to work with ASIWYFA because I love them and the live show is great. I did talk to them about releasing a split single a long time ago but the other band I had in mind dropped off the face of the planet so it never happen.


(((O))): Quite a few of the bands & promoters we've interviewed recently have cited last year's ArcTangent as feeling like something of a turning point for the post rock / metal scene; giving what was previously something quite disparate a flag to rally around. Would you agree with this & any plans to get Karhide on the bill at some point?

I love the idea of ArcTangent and was really disappointed that I could not go last year because of other commitments. I think a lot of the Post Rock scene has grown in a DIY way and left a space for some smaller festivals to come and fill the void and show the bigger festivals how it should be done! I have some news about playing but I’m not allowed to say. (Karhide have since been added to the ArcTangent lineup!)


(((O))): Finally, is there anything else you want to tell us that we haven't already covered
here?

Go and check out the Karhide and Field Records back catalogue there’s some great stuff!