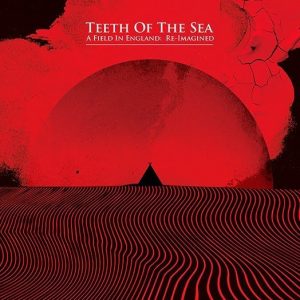 Teeth Of The Sea

When Teeth Of The Sea announced they were re-scoring A Field in England live I felt it was a great combination. Ben Wheatley's hallucinogenic, sprawling epic was finely scored on film by long term collaborator Jim Williams, but the great thing about music and film is they both can inspire interpretation and TOTS have a seemingly natural ability to create music inspired by film. Their recent astounding album Master itself sounds like a mushroom fuelled disco for the apocalypse. It very much ‘feels’ like a soundtrack and conjures imagery every time I listen to it.

For me the only negative aspect of the Field in England shows was not being able to get to any of the performances. Thankfully Rocket Recordings have stepped in to ensure we can at least hear what these shows were like. After recording the interpretation it now sees a release on vinyl as a Record Store Day exclusive. This is the essence of what RSD is about I feel. An exclusive release of something quite unique, rather than major label's attempts to hijack it with crude ‘cashing in’ releases.

As for the actual music, it's very different to Master but no less brilliant. It begins with the sprawling ‘Whilst We Live In Fear of Hell’, gentle waves of ambience with Sam Barton's now familiar trumpet playing merges with acoustic guitar and sparse melodies. It fades before the trumpet returns piercing the near silence. It's mesmerising stuff with an electronic throb providing the backing with minimal rhythms

If you're a fan of TOTS it won't matter if you also enjoy the film. The music can be enjoyed separately and personally I think it makes a great come down companion to Master's euphoric highs. I'm sure it wasn't intended that way, but it is definitely more laid back but equally as brilliant.

The second of the three tracks is ‘An Ungodly Scheme’. Continuing in the minimal approach, it builds with a glorious repeating melody. As gentle swirls of synths and atmospherics build the trumpet emerges again, bathing the closing in warmth. If you weren't familiar with the film and the title and sounds here could give a different impression. ‘A Field In England’ could mean a festival site, with revellers watching the summer sun by campfire. It's got that kind of feel, and is credit to TOTS that the music creates more than imagery of the film.

Having said that, it’s difficult for me not to picture the iconic scenes of Reece Shearsmith on final track ‘Open Up and Let The Devil In’. The scenes of him emerging from the tent and those moments on film scored by Blanck Mass fit perfectly with this alchemy inspired track. After tribal rhythms open, a magical flickering melody dances through the track. Inspired and captivating it weaves its way before ending triumphantly with trumpet coating the military like rhythms. A spellbinding finish to an excellent and essential record.

Teeth of The Sea continue to prove to be one of the country's brightest talents. With this re-imagining of A Field in England, they've created a truly worthwhile RSD release.