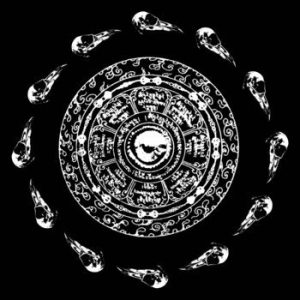 Out on April 10th on limited cassette through Tartarus Records

The night sparkles with stars as you cast your gaze upwards, the deck of your small craft rolling under your feet. Deep rumbles emanate from off your stern, mixing with the cloying stench and hypnotic tones you hear.

Mesmerised, you lean over the prow, the water shimmering and dancing under the moonlight. But you lean too far. In that split second of regret you hear a laugh - or what sounds like one. And then you enter the water. And it is here.

Yog-Sohoth is slowly rising to the surface of a suddenly roiling sea, tepid breath marking its presence before it arrives and its tendrils slowly wrap around you to pull you down into the inky blackness...

You vainly struggle against it, losing precious energy attempting to cease its flow. The leviathan laughs at your puny attempts for salvation - braver and stronger men than you have tried and failed against its inhuman grip. The pressure increases in your chest while the darkness envelops you, drawing you deeper into it's confining embrace.

A guttural voice rings out in your ears (or is it in your head?), imploring you to fight. The voice is like gravel scraping across an empty car park, transient yet impossible to ignore. The beat of your heart thumps harder, struggling to send blood to your extremities as the beast constricts harder. Needle like pricks rack your body, leaving fire and ice where they've been.

The incessant thumping continues, no respite, no relief and no salvation. Matching the tempo of your heart as if to mock you, it's all around you. Normally comforting, this will signal your demise. Distorted bass notes sludge their way to you from somewhere, entwining themselves with slow, powerful guitar...

The light is lost to you now. Inky blackness approaches you and you begin to welcome it, knowing that this struggle is doomed. Slow melodies cascade through your ears, bouncing around inside your confused head as the suckers of the monster’s tendrils feel their way over your skin, searching for a weak point. Guitars signal your epitaph.

Sparks explode behind your eyes, lending unearthly light to what you can see. Your fists have no power against such a force. You now know there is no escape – the beast has you. Who will mourn for you? Will you be noticed? Or are you simply another loss to the unknown seas – a spidery scrawl on the page of a ledger.

Throwing your head back you give in, taking in as much water as you can. Salty brine rushes into your lungs as the beast constricts again, locking you in place. As bass thumps and those drums toll one last time for your lost soul you see a last glimmer of light flash past you. And then it is there.

The leviathan's eye somehow looms out of the darkness, impaling you with an alien stare. It knows your pain and your death, and it cares not. Dark, evil intelligence is there behind that monstrous pupil. You are an amusement, a gnat. A meal.
For you have been taken. You belong to it. And tonight it will feed. And you are human – it is an old God. The world will turn for aeons, and it will stay the same. Humans will rise and fall, and it will continue.

And it will feed.

And it’s down there, in the dark…. Listening.

And that's what listening to Ortega – ‘Crows’ is like. Dark, twisted beauty. Can't recommend it enough. So bleak it'll tear your face off. So good you'll keep coming back for more. I know I have.

*** postscript *** So I listened to this release a couple of times and the above 'review' formed in my mind, so I thought I'd write it. This is the first time I've heard of the band, or heard their music (which is kickass). So I jumped on their Bandcamp page, and then their Twitter. And then I saw this: https://fb.me/3c2Bt9VOQ

What the fudge? So they posted that pic the day I wrote the above... Damn. I think I got what they were trying to do...

Also, how the hell do I get one of those shirts?