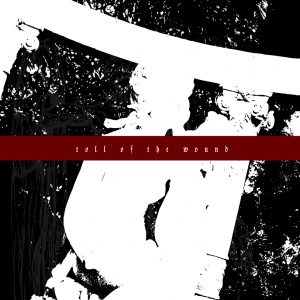 Released May 13th through

Edinburgh's masters of misery Of Spire & Throne satisfy my craving for tectonic heaviness in a way few other bands can. Their devastating dirges have had me swaying perilously close to collapse the couple of times I've caught them live, and their latest release Toll Of The Wound captures their particularly intense strain of doom perfectly.

The disjointed martial rhythm of the opening track can scarcely prepare you for whats to come, as 'Legacy' erupts in a bludgeoning riff, soon joined by guitarist/vocalist Ali Lauder's subterranean, subhuman roar. The cumulative effect is genuinely disturbing, sending a shiver up your spine before crumbling it into dust, as the band alternate between short sharp shocks and guitar-strangling sludgier sections.

There's not a moment of relief to be found, and even the introductory percussive atmospherics of following track 'Tower Of Glass' will set you on edge, dreading what could be coming next with every cymbal tap. This sense of unease continues throughout, as the band never quite bring the track to any kind of conclusion, with Lauder and bassist Matt Davies seeming more content to meander malevolently around Graham Stewart's brilliantly restrained drumming. The looser structure of this track is no bad thing, but a comfortable listen it is not.

Closing track 'Cascading Shard' is a full 13 minutes of desolation, which proves to be extremely fucking unlucky indeed, as wave after wave of distortion slowly erodes what little semblance of sanity you might have had left. The woozy lumber of the opening riff sounds like Sleep if they opted for crack instead of weed, with Lauder's rumbling vocals underpinning the whole horrible thing.

Each layer of the track is slowly stripped away until only the bass remains, before everything coalesces into an earth-rumbling stomp. The final minutes prove to be the most dynamic of the whole album, the clattering drums and ever-writhing riffs ensuring that Toll Of The Wound closes as strongly as it began. Sure to be one of the few releases this year truly worthy of the word crushing, this release will soon be available on a variety of beautifully presented formats via Broken Limbs Recordings.