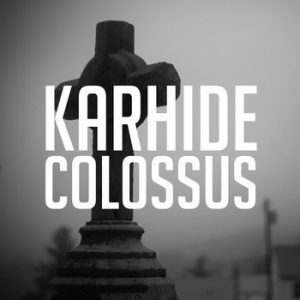 I saw Karhide – aka Tim Waterfield – once, about 3 years ago, in a pub. In Blackpool.

Well, when I say ‘saw’, I was there and he was there and it was really dark and I couldn’t actually see him. Let’s say, I ‘heard’ him. He was dead good. He played his guitar and did exotic thing with electronics, and was joined by another fellow on guitar. I think it was Marty from Alright The Captain.

Anyway, the point, such as it is, of this waffle is to introduce you, dear reader, to the fact that Karhide likes to invite other musicians to help out with things. And, in the case of this new EP of his, Colossus, that musician is Alex Rainbow, blond haired Adonis and drummer from Tacoma Narrows Bridge Disaster. Who makes his presence felt pretty darned early.

There’s a few slightly un-nerving industrial noises, a clatter of drums like a load of bins falling down a lift shaft and then OOOFT! Imagine being fired out of a launch tube, hammered back into your seat by acceleration, into space. ‘Colossus’ is a bit like that. Space-rock riffing like a heftier Hawkwind, rapid fire blaster cannon drumming, it’s the soundtrack to the wildest flying saucer attack never filmed. It’s punchy and stabby and exhilarating and batters you around your cockpit for 4 minutes and then, suddenly and unexpectedly, there’s a delightfully airy little coda which totally blows my space battle analogy, but leaves me grinning like an idiot every time I hear it.

‘Turing’ – and I’m going to stick with the science fiction imagery here – is more like a chase through the flickery neon-lit urban canyons of Blade Runner (Other dystopian future urban sprawls are available). It’s gritty, abrasive and a tad uneasy. Synth heavy, skittery drums. You can – well, I can, anyway – imagine the huddles of weirdos, the reflections in the puddles, and the claustrophobic, vertigo-inducing walls all around you as you hunt something down for your enigmatic bosses. Yes.

‘If Not Else’ packs a lot into its three-and-a-half minutes, alternating between gut-punching heavy space-fuzz riffing and almost Miami Vice-esque synth noodlery. Mostly the riffs, though. It’s a bumpy ride, after which, ‘Guitar Swell’ is just what you need.

It’s an odd title, I think, as there appears to be very little actual guitar in the recipe. It’s a soothing synth/samples/piano drift - a bit glitchy in a Vessels kinda style. Maybe some of those washy sounds ARE made by a guitar, I don’t know. Whatever, it’s a fine way to relax in front of the fire after a hard day fighting space aliens and chasing replicants through the city.