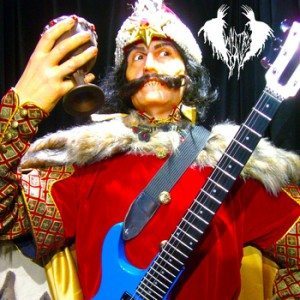 There’s something askew about Whitby Bay. Their logo seems to be just right for a black and white, dimly-lit forest scene, and yet it is featured next to a cartoonish wax figure of Vlad Tepes as if he lost his way and found himself out of place in the Pirates of the Caribbean ride at Disneyland. There is something undeniably off-center with the music too, of course, and on their debut single Unextinguishable Candle they ride the tension between a band that clearly got all As on their black metal homework, but is just as content to explode the whole scene with unorthodox mayhem.

With the track, 'Unextinguishable Candle', Whitby Bay makes their way fast and loose through a primal, blasting beat as guitars chug along to the properly demented vocals. The checks are all in the right boxes, although the song breaks itself up at first into strange stop-start rhythms that would throw any traditional black metaller into catalepsy. When you note that the band worked with Weasel Walter (of The Flying Luttenbachers fame) and cite the blues-perverting art psychos Harry Pussy as an influence alongside Ulver - it begins to make a lot of sense. It is possible to be reverent and irreverent at the same time.

As flip-side 'Black Cape' stomps into its climax, you’ll be glad to hear that you can indeed learn the black metal formula and break it in some really satisfying ways. The track is always just on the cusp of becoming a joke, and yet it’s also so undeniably crunchy and malevolent as to satisfy the reptilian part of the brain of any open-minded headbanger. It’s hard to pinpoint where the band is coming from, how far in their cheek do they keep their tongues, and that’s part of what makes it such a delicious puzzle of a track. I can’t wait to see what they come up with for the full length.