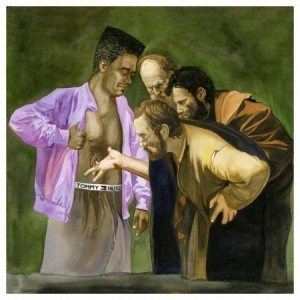 (((0))): Thanks for taking the time to do this interview with Ech(((o)))es & Dust. Can you give our readers that may not have discovered you yet a history of Marijuana Deathsquads and what you're about?

Marijuana Deathsquads probably started somewhere around 2009, as a way to free ourselves up from the music we were making in a previous hardcore band. We wanted a project that could take many forms, that could play with as few or as many members as we wanted, that could include all of the musicians we wanted to play with at any given time, that could play the weirdest and wildest shows possible and act on any crazy vision we had.

We started by doing a yearlong residency in Minneapolis, then took the residencies to LA, NYC and Austin. Lately we've been touring with our best friend band Poliça and doing maybe the weirdest thing we've ever done: play as a five-piece band every night, same members, similar sets, playing songs that we all know, on the stage with lights at around 8pm. It's wild!

(((0))): In your press release for the album 'Oh My Sexy lord', it said that you were "a gang first, and a band second". That's a damn fine attitude to have, what kind of a gang would you describe yourself as?

A gang of kids sitting in a field, or on a hill somewhere smoking pot and coming up with awesome names for their gang.

The name actually comes from the future, during the devastating Marijuana Wars, when weed is the only currency and the great floods have all but erased the crop from the planet. In the present context though, it's just two words that sound beautiful together.

(((0))): 'Oh My Sexy Lord' is an amazing album that's easy to get lost in and has an inkling of chaos and anarchy, yet the structures of organic-elctronica within also have a sense of order about them. What's the writing process like, and do you write specifically for recording in the studio or for live shows?

Controlled chaos is our main thing. We've always written for the live shows first, writing new sets before each show, so we amassed an insane amount of material after a while. A lot of that has ended up being used for other projects or rap beats or whatever, and a lot of it gets recycled and adapted.

If we revisit it and the sounds seem too old, we just write new stuff. The recording process for "Oh My Sexy Lord" was insane. We probably literally went insane over a 10 day period of recording something like 6 hours of material, which was then edited down, trying to find where the "songs" might be. It took a very long time.

To contrast that, we recorded and mixed the Music Rocks EPs in about a week. The process for the next recordings lies somewhere in between those two.

(((0))): Talking of playing live, I've been checking out some videos on Youtube. My favourite is the full show you did for K Radio last year, non stop for half an hour! There must be some serious communication between you going on to know where the changes all come in. There's a part in the video where you're all waiting for the drums to come back in with shit eating grins on your faces, and then the sonic insanity kicks back in! Even though there's huge concentration going on, you look like you're having the time of your lives. Do youprefer to play live or recording?

We use a lot of hand signals and visual cues to communicate with each other during the live shows so that we can change and react instantly and all together. I think at this point we still all prefer to play live, it's really what the band was built for. We learn new stuff after every performance, and are really excited to take that back into the studio as soon as possible for the next recordings.

(((0))): 'Ewok Sadness' is the first single to be taken from the album and the video does indeed feature a very depressed Ewok. I wondered what one would look like, and the video definitely captures that! Was it your intention to go with a literal vibe to take the song to screen?

Our intention was to do a literal depiction of the songs title, a title that was already ridiculous and really has nothing to do with the imagery in the song - Ewok Sadness was just what the original beat/map of the song was called, and it stuck permanently. The song itself is dark and serious, so it seemed like a good idea to go for a funny and wild take on that for the video.

(((0))) There's quite a few extra members to the gang on the album (Bon Iver, Policia's Channy Leaneagh & Har Mar Superstar). Is there anyone you'd like to work with who you haven't yet?

We've been really lucky to have worked with so many amazing musicians. We have a long list of musicians and artists we'd love to work with at some point. Brian Eno, Joey Baron, John Zorn, EyE from Boredoms… a thousand other dream collaborations…

(((0))): How was the tour in Europe? Do you notice a difference between these crowds and the ones back home?

This tour has been going really great! We play early in the evening, but the crowds seem to fill in and then actually stay to watch us which is very cool. The crowds on this tour haven't danced around as much as at home, but at home we're usually playing very late and under very different circumstances.

We understand we might be tough to take in when your just walking into the club at 8pm not expecting to be bombarded by an unknown opening act. But the crowds have been very gracious and we've met some super cool people out here.

(((0))): We like to let people know about new music (be it recent or from the archives), is there anything you'd recommend to our readers that you're listening to right now?

Why don't we just list off some of our favorite Minneapolis music that's going right now: The Cloak Ox, Lizzo, Tender Meat, Father you See Queen, Ronia, Plain Ole Bill and Get Cryphy, Allan Kingdom… Har Mar Superstar made an amazing album last year and is currently touring the shit out of it. XXXPRESSIONXXX from New Orleans.

(((0))): Before you go, Here's a random question in the form of a lyric just for the hell of it. Guess the song if you can, then answer in another lyric: "What is Love?"

"Baby don't hurt me"? Is that the right answer? From that terrible SNL sketch thing?
Response "love" lyric:

"Ain't enough room in this fucking town
When you see tin head, tell him be ducking down
I'm not romping around
He better be ready and prepared to be stomped in the ground"
-DOOM

We have a small tour in March starting with a bunch of shows at SXSW. Then we're going to try to write and record 4 new albums this year. And we'd like to set up some more residencies somewhere, possibly in Europe.

(((0))): Thank you for taking the time to answer these questions, all the best!