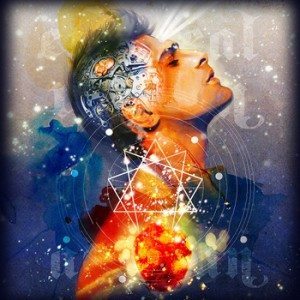 Whilst the eyes of the world may be on the political implications happening in Ukraine at the moment it is good to see that aside from all the serious happenings there is music still coming out of it. Whether the Ukraine music scene is vibrant at the moment is a moot question but Ethereal Riffian are definitely giving it a go on this new mini album Aeonian.

Certainly music that is of its place, it's unlikely that the music here has any bearing on real world results and as such we should not try to find any implications. Instead it is worth sitting back and listening to a decent slice of Eastern European metal which shows enough talent to betray what may an un-mined area of music.

Aeonian has high aspirations and a cursory glance at its song titles with their implications of being some sort of concept immediately either causes alarm bells or excitement depending on your point of view. There's no need to worry though as the music here is pretty damn good and displays an innate sense of creating a doom laden atmosphere. There are also some pretty tremendous riffs on offer.

As the lyrics are indecipherable we have to settle with the mood delivered by the songs and as the album progresses we find ourselves swept along as riff after slow riff builds to measured doses of clean psych which drift along on beautiful guitar playing. A great point being on the final song, which mixes in Meddle era Floyd with a fine dose of early Sabbath.

Maybe a bit of variety could have been introduced but when you settle into this genre of music there is little room for manoeuvre. No such problems though as the production and excellent musicianship is enough to get us by. In fact, on repeated listens multiple strands of segments from earlier songs reintroduce themselves making it quite a satisfying whole. Not bad, not bad at all...more of a connoisseurs album for people who appreciate decent musicianship rather than one to get your head down and mosh to.