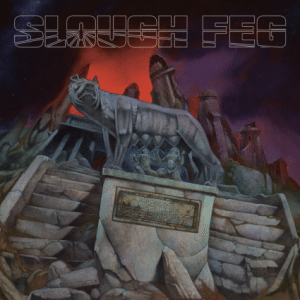 Digital Resistance is Slough Feg’s eleventh studio album. It stands to reason that once a band is at that point in their career, you’re either on board or just don’t get it. And it seems like more people are on board with Slough Feg than ever before, with Digital Resistance receiving the band’s widest distribution and greatest media notice in their history. This is a good thing for Slough Feg fans, a sort of validation for those who have cornered many a metalhead with a hands-on-both-shoulders “no, seriously dude” monologue for over a decade. It’s a good thing for metal fans in general, really, seeing a band that so unabashedly adores the genre receive proper attention for it. That said, Digital Resistance is not Slough Feg’s best album. Whether or not that even matters at this point, though, might be a moot point.

A common theme in interviews with frontman Mike Scalzi is that he lives a musically insular life. He has loudly worshipped Maiden and Priest from day one and seems perfectly content to ignore modern music outright. In a way, it’s this refusal to progress or expand that is the band’s greatest draw and its biggest weakness. Perhaps despite Scalzi and his bandmates’ best efforts, however, there has always been a progression in their sound. While the template has often stayed the same - borrowing heavily not only from NWOBHM stalwarts but also celtic, folk, and psychedelic influences - the band has always crafted albums that each have a specific identity. 2011’s Animal Spirits, for example, not only explored similar philosophical/historical themes in each song but had a raw edge that stood apart from their other albums. Likewise, it’s easy to point out differences between the songwriting and tone of Hardworlder and Traveler despite similarities in setting and terminology because each of those albums were based on such specific source material both literary and emotional. Digital Resistance maintains that idea of thematic uniformity, exploring the effects of technology on culture and specifically how we interact with each other. Sonically, however, each track seems to borrow not from one specific raw source but rather from different moments in Slough Feg’s own past as a band.

The most noticeable element in the new album is a steering away from the more raw, thrash-indebted sound of Animal Spirits to a return to the early career favorite Twilight of the Idols. There is a galloping, folksy swagger to these songs whose primary purpose seems to be getting people to get together with some beers and have fun. In a metal community seemingly preoccupied with being taken serious, it’s refreshing to know that you can always count on Slough Feg’s ability to inject some goofiness into a scene that is so often dominated by the gloomy and the self-serious.

Opening track 'Analogue Avengers/Bertrand Russell’s Sex Den' sets the tone quickly. In addition to its chuckle-prompting title it launches into a tune that’s more full of swagger than menace with a terrific electric organ offering a bounciness not heard from Slough Feg in some time. Scalzi’s vocals even seem to call back to earlier years as he sounds comfortable belting out in a register high enough to grant his voice a youthful brightness. Similarly jaunty is the song 'Ghastly Appendage' which echoes tracks from the past like 'The Wickerman' with a rhythm set to swing to-and-fro wildly. All the while, Slough Feg maintains their usual focus on catchy sing-along melodies and rumbling percussion that resonates more with the fist-pumper than the mosh pit philosopher. This isn’t to say there isn’t emotional truth or deeper meaning to be found here, the album covers broad ground from the aforementioned technology-indebted social ills to the moral struggle of a reflective hitman (in the stellar track 'Habeus Corpsus'). Slough Feg has always been a band with plenty of ideas, but in this case the music forcibly conquers the foreground from the very beginning.

So by the end, what has been given is an album that captures a great band in a moment. It’s not a definitive moment; there is no triumphant victory lap being taken. It seems to borrow snapshots from the band’s long past to form a collage of people who have never made apologies for themselves. While it might not be their best or their deepest, it is remarkable in that it is a continuation of a legacy that has never become bent by outside expectations or perception. Slough Feg will continue to play whatever they want regardless of who is listening. It provides a sense of validation, for fans and band alike one guesses, that the audience is the biggest it’s ever been.