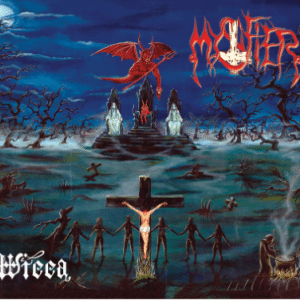 Out on February 11th through

Do we need Satan anymore? Satan plays many roles that have shifted throughout history: boogeyman/moral enforcer, symbol of fierce independence, and more recently a cartoonish punchline. The recent, popular movie This is the End plainly highlights the current image we think of when we contemplate the Devil - a big joke with no speaking lines. Modern day metal bands are beginning to reflect this shift as more bands’ lyrics and imagery deal in the natural world, alternative spirituality, exploration of the self. Often a new band claiming to embody Satanic ideals is dismissed as hokey and outdated by a critical base that increasingly praises innovation and unorthodox approaches to metal traditions. It is into this environment that Greyhaze Records is re-introducing Brazillian black metal band Mystifier’s 1993 release Wicca.

From the moment the pitch-shifted, multi-layered vocals crash through the B-movie synth organ of album intro 'Our Gloat', it’s clear that this is music of a certain era musically. The mid-paced thrash of 'Osculum Obscenum' sets the tone for the rest of the album: full-charge rockers with manipulated vocals that sound like the deadites from Evil Dead. The immediacy of the music is a make-or-break moment. You’re either on board from the start or left feeling cold. For disciples of like-minded contemporaries Sarcofago and Nifelheim this music is like coming home. The bass is chunky and given ample space to punch through, the drums are mixed to sound like cannon-fire, and those love-or-hate vocals bark and squeal throughout.  It’s boilerplate blackened thrash, but it’s heavy as Hell.

What elevates this album as something to be reissued, though? Stripped of its context and heard as a new release, this album would quickly fade into the background without making much of a stir. Its obsession with sounding evil is unavoidably grotesque when listened to among more modern, nuanced metal bands. This sound, manipulated vocals and relentless drumming especially, has already been taken to its logical conclusion with bands like Canada’s Revenge - artists whose focus fits more naturally into an increasingly common narrative centered around bleak nihilism than the monsters-in-the-closet motifs used by older metal bands. A band like Mystifier, whose members continue to photograph themselves dressed in patch-heavy denim, is a call back to more thematically simple times. In this context it is difficult not to respect the music. As metal reaches wider audiences, critical analysis of older bands tends more toward the dismissal of traditional aesthetics which are often derided as cheesy and outdated. Within that context it becomes a bold statement to fly the raw Satanic thrash banner proudly rather than rely on current trends of introducing unorthodox textures and genre mash-ups as several modern metal bands are doing in greater numbers.

Wicca is a document in metal’s broad history. While its importance can be debated, it is worthwhile to explore as an undeservedly overlooked piece of culture. At times the album can cause a few moments of unintended comedy, a chuckle that is most likely a product of a modern age in which we too often consider what we like and how we share our preferences. If you set those concerns aside, however, and put on 'Mystifier (Satan’s Messengers)' your inner hesher will win out in the end. Never be embarrassed to be caught banging your head.