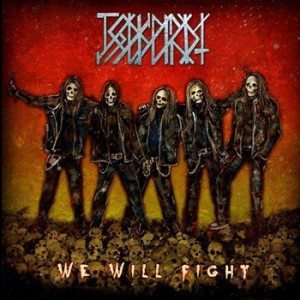 Jesus Christ are a five piece thrash metal band from Russia, and after time spent recruiting new followers to replace old, they decided to travel the path of thrash metal – and We Will fight is the result of them creating a “more aggressive sound with severe lyrics”. There are some almighty riffs here on the 8 tracks available to your ears, but they seem to get lost amongst some strange mixes, and tend to imitate others, rather than find their own identity.

‘March of Jesus’ is the instrumental opening track, and the piano-led intro had me misled into thinking that this may be akin to Cradle of Filth (who also had Jesus Christ on the back of their t-shirts I believe). Instead, both guitars lead the way with dual harmonies and pinch harmonics that would have a Rust In Peace era Dave Mustaine grinning from ear to ear. But they smother the bass and drums as if they were putting them out of their misery, and this shouldn’t be the case, as when all instruments are clearly heard is when the message of Jesus Christ is truly heard.

Things pick up and get heavy with next track ‘The Deadmen Attack’. Ferocious drums with great blast-beat snares crash amongst pummelling bass lines at full speed, while the guitars use all strings to full effect, like the twelve disciples – dedicated to carrying the words sang throughout the album. Meanwhile the vocals have a lack of focus or direction, attempting early Iron maiden’s Bruce Dickinson and (briefly) Sepultura’s Max Cavalera from the Chaos AD album (shouldn’t that be Chaos BC?).

Now and again, you’ll come across some sweet moments of unification and that’s when this album really shines. When everything comes together and makes much more sense to you, but this is a rarity and is unfortunately overshadowed by poor production values. At times, this comes across as a demo-quality attempt at showcasing what is quite obvious as very talented musicians. ‘Revolution Now’ brings us closer to the end, and as the most experimental sounding track of the whole bunch, should have been explored more – only 43 seconds long and one of my favourite parts!

“We will fuck and we will fight” is the lyric in closing track ‘We Will Fight’ that sticks out the most for me, as it destroys any seriousness the band might have tried to get across. I’d say it was an ode to Metallica’s ‘Motorbreath’ in terms of living life to the fullest, but instead of being the “sound of living fast”, it’s a car crash of ideas that I hope in the future will come together, because there’s some serious talent here that will hopefully shine at some point. For now though, there’s no point feeding the masses with loaves of bread if they’re mouldy – at this moment, they haven’t yet nailed it.