Pulled Apart By Horses have just announced dates for a UK tour and will debut new tracks from their upcoming album, the follow up to 2012’s ‘Tough Love’. James Brown took some time out to talk to us about what to expect, and also gave us some exclusive song/album titles!*

(((O))) First and foremost, thanks for doing this interview with Ech(((o)))es & Dust (and for taking my interview cherry)!  How about we start off with a little band history for the uninitiated?

Well, basically we all played in bands that either became defunct or spilt up in Leeds, and from sheer boredom I started messaging Lee over a forum about starting a nasty sounding Jesus Lizard style band after his band Concentration Champ (Yes, they were called Concentration Champ) split up. I met Rob in a pub with his girlfriend and told him about the idea for the band and he was game to get involved. After a few practices we needed a singer and next thing we knew Tom came to our third practice for a laugh and now five years later our full time careers are playing in a band, but we sound nothing like The Jesus Lizard. Pretty fucking sweet really.

(((O))) How was 2013 for you?  The Charity gig you played for Shelter last year sold out pretty damn fast! What else have you guys been up to? Have there been any other highlights you'd like to mention?

2013 was a kind of slow year for us really. We purposefully decided to take a little break from any kind of touring to really focus everything we could into writing the third record. Its been kind of hard with us being a predominantly live band, but its been for the best as the new record is shaping up to be a total monster. We were all quite surprised how quick that show sold out to be honest and it was just a really mint way to road test some of the new material to our lovely fans before we began recording it. Crowd were wild, in fact, wild isn't even the right word,....... demonic.

(((O))) It's been a while since you released 'Tough Love', which had an amazing reaction from the general public, along with some awesome reviews and great live shows!  It's beast of an album that's for sure, as heavy as Black Sabbath and as raw as early Nirvana with some Queens of the Stone Age thrown in for good measure! Are you working on a follow up, and what can we expect?

Yes! We've been working on the record since late 2012 when we finished touring Tough Love. Its been a highly enjoyable process as previously we've knocked out and written the other two records pretty quickly in sporadic blocks of spare time off from touring. Its been so refreshing to relax with it and focus on sounds and vocals instead of writing just enough material to put down 12 songs and hope for the best. We've written about 30 in total but we aren't recording all of them. Expect a change from the last two records, but not a total departure. Its still rock but with a bit more thought in it then anything we've done before.

(((O))) Any working titles you'd care to share with us? Feel free to just make some up on the spot right now!

Chris Tarrant's Ankle Grind is the first single released in May, which will be followed by Blue Cheese Fuck Holes in late August. The album is called Piss On This Here.

(((O))) How was your Christmas/New Year? Did you all party together or is it a time to get out of each other’s hair for a while?

We had a big NYE party at my house actually which is still a bit of a blur really, although I can kind of remember us all listening to Gary Barlow on the TV for an hour before the clock ding donged, I think. Lee didn't make it as he resides in London now with all his bags of money. Christmas was a drinking write off, but in the best possible way. I love that time of year because everyone is drunk and happy to be not working.

(((O))) You released a split 7" with Blood Red Shoes on your own record label, 'Covered Records', covering each others favourite tracks. Any plans to do more of this? If you had your pick of any band in the world, what would be your dream split 7"?

Yeah I really enjoyed doing that and people seemed to love it which was sweet. I've got another couple of releases planned and as soon as the album is recorded I'm gonna put those plans into action. My split would be Radiohead and The Jesus Lizard, purely because them covering each other isn't even something I can even comprehend!

(((O))) As we're all about introducing people to new music (including bands that may have been going for a while that people may not have heard of yet), is there anything you'd recommend to our readers?  What's the music scene like in Leeds these days?

Leeds is always pumping hard when it comes to new music in every shape, way and form. If you haven't heard of Eagulls I'd totally check them out if you like your guitars sleazy and lo-fi. Another band making waves from up North is Hookworms who seem to be doing really fucking well at the moment and are busy working on a follow up to their debut record. Its been pretty good for new music up here over the past few years and it never really seems to slow down.

(((O))) Before we finish this, I'm thinking I might just throw in a random question  in the form of a lyric for shits and giggles in this and future interviews.  Guess the song if you can (should be easy), then answer in another lyric:  "Where have all the cowboys gone?"

The answer is Paula Cole and my lyric back is "To the Gay bar, Gay bar, GAY BAR". Good question that pal.

(((O))) What are the band's plans for 2014? Are there any gigs/releases you'd like to let us know about? With 2014 being the Year of the Horse, I'm sure there's some obvious puns that could be exploited in relation to your bandname.  Same for 'Stablemates' Foals (BOOM!)

Neigh. Its awesome that 2014 is the Year of the Horse and it kind of fills me with an over whelming sense of confidence, so much so that I had my first horse riding lesson in January. I shit myself at first but you soon get into the beasts rhythm and become at one with its power and beauty. Erm, anyway. We've just announced an intimate warm up tour around the UK in April and May which is gonna be flaming fantastic as we've been dying to get back on the road. Its the kind of tour where you visit all the towns that aren't the major cities that never get many shows. Its gona be so good getting up close and personal with folk again. We'll obviously do another run later in they year when the record is out so we don't leave Manchester, London, etc, hanging. Oh, and we'll release some new music pretty soon and the third album this year!

(((O))) Thanks again for taking the time to do this.  It's been an absolute pleasure!

*This may not be true, and could be ‘horseshit’ (sorry) 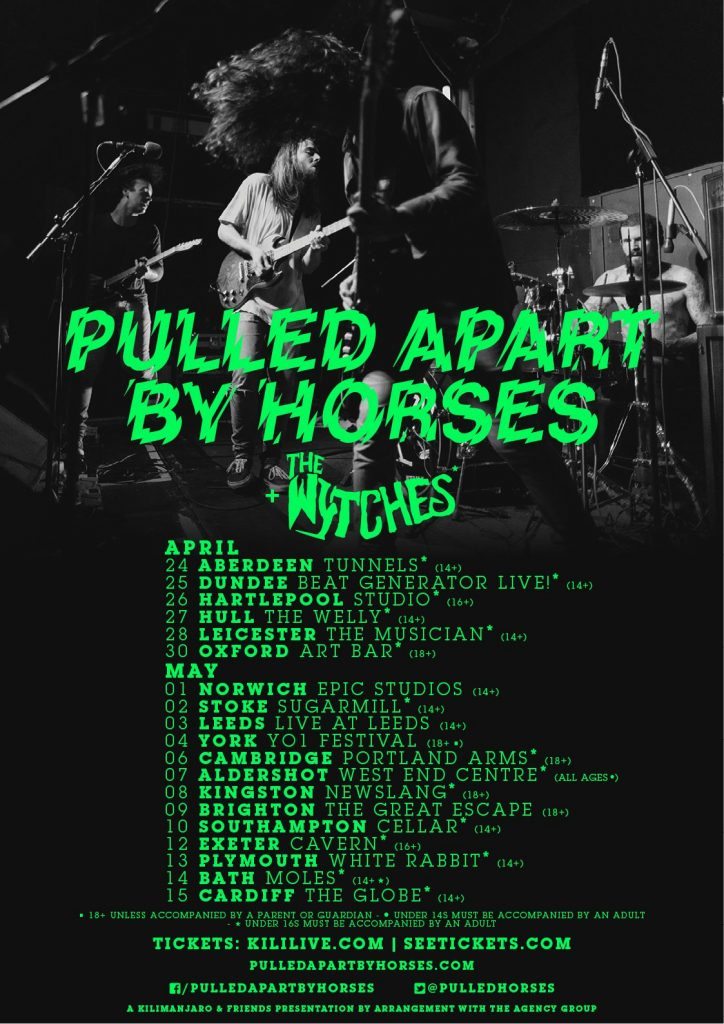