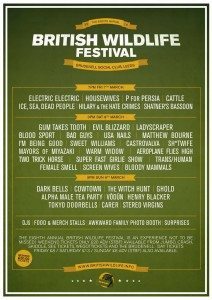 Adam Nodwell has been a huge part of the Leeds DIY scene for some time now. Amongst the chaos of sorting out this year’s British Wildlife Festival festival (now in it’s EIGHTH year!) between 7th-9th March, he took what little time of his own to answer a few questions for us.

Very good thanks, letting time get the better of me a bit, just about to sort out a few extra surprises for the festival!

(((o))): Let's start things off with some history of British Wildlife for those who may not (yet) know about it, care to enlighten those people?

(((o))): As a DIY promoter, do you prefer to be approached by bands, or do you go out there and ask the bands you'd like to put on yourself? Maybe a mixture of both?

A mixture of both, though I get approached by more bands than I can count in a bag of skittles. When it comes to the festival It tends to be 70% or so bands I have already tested the water with and generally already know personally, then I stick a few wildcards in there for good measure. I like to keep it fresh, when criticized for putting too many obvious choices on, I’ll react by booking something no one has heard of (but should).

(((o))): You must put in a shitload of hours to put on so many great shows! Where do you find the time? Does anyone else get involved?

People have come and gone and I do like to collaborate with other people, Nathan at the Brudenell has helped me over the years, Nick at Oporto too, and I have collaborated with Vessels and That Fucking Tank as co-curators as well.

(((o))): Do you remember the very first show you put on? How does that compare to where you are with things these days?

Yep, it was on 16th January 2006. These Monsters , University friends, headlined with Meet Me in St Louis supporting. My second show was Liars as TJ's (Woodhouse Liberal Club) which was timelessly captured as the front cover for their fourth album Liars. I have a photo of the photographer taking the photo that was used, trippy!

(((o))): How does the DIY scene differ from way back then to these days?

I don't check my myspace messages as regularly!

(((o))): This years British Wildlife Festival is fast approaching with another fine line up over three days, how's the preparation going? That's a lot of bands to be looking after!

Where to start! Well I have almost finished designing the program, it's nice and foldy. Stage times are sorted, I'm expecting a few changes still as usual. Other than that I'm ready to go, need to get the word out a bit more, if you are reading this, thanks very much, pass it on!

(((o))): Are there still tickets available? Apart from the bands, what else can people look forward to?

There are still plenty of tickets available, I'm not putting on Sting. Prince may make an appearance, he may not. There will be cake, some good food vans, maybe a BBQ if the weather is nice, I suppose there's still a risk of snow. March is a random month for weather.

We are also having the first ever "Awkward Family Photo Booth" That should be fun.

(((o))): As an ongoing theme in my interviews, I'm throwing this out there to everyone. Guess the song if you can (should be easy), then answer in another lyric: "Can you feel my Love Buzz?"

Nirvana! My answer: “I can feel it coming in the air tonight!”

(((o))): We're all about sharing new music with our readers, is there anything you can recommend to them?

Like Steve Albini said at Shellac's ATP back in December 2012. All the bands are amazing!!!! So go grab a glass of wine, sit back relax and enjoy all the bands - I have made a Spotify playlist of all the bands and also provided plenty of links on my website.

(((o))): Finally, what's next for British Wildlife? Any future plans?

Once we're over the hill there's plans to get involved in a few existing events in Leeds that I can't disclose as it's not set in stone. I'm also getting married in August so that's exciting!